Maindee Library has been open to the public and community-run since October 31st 2015. This blog article takes you through a year of planning the future of this community building. 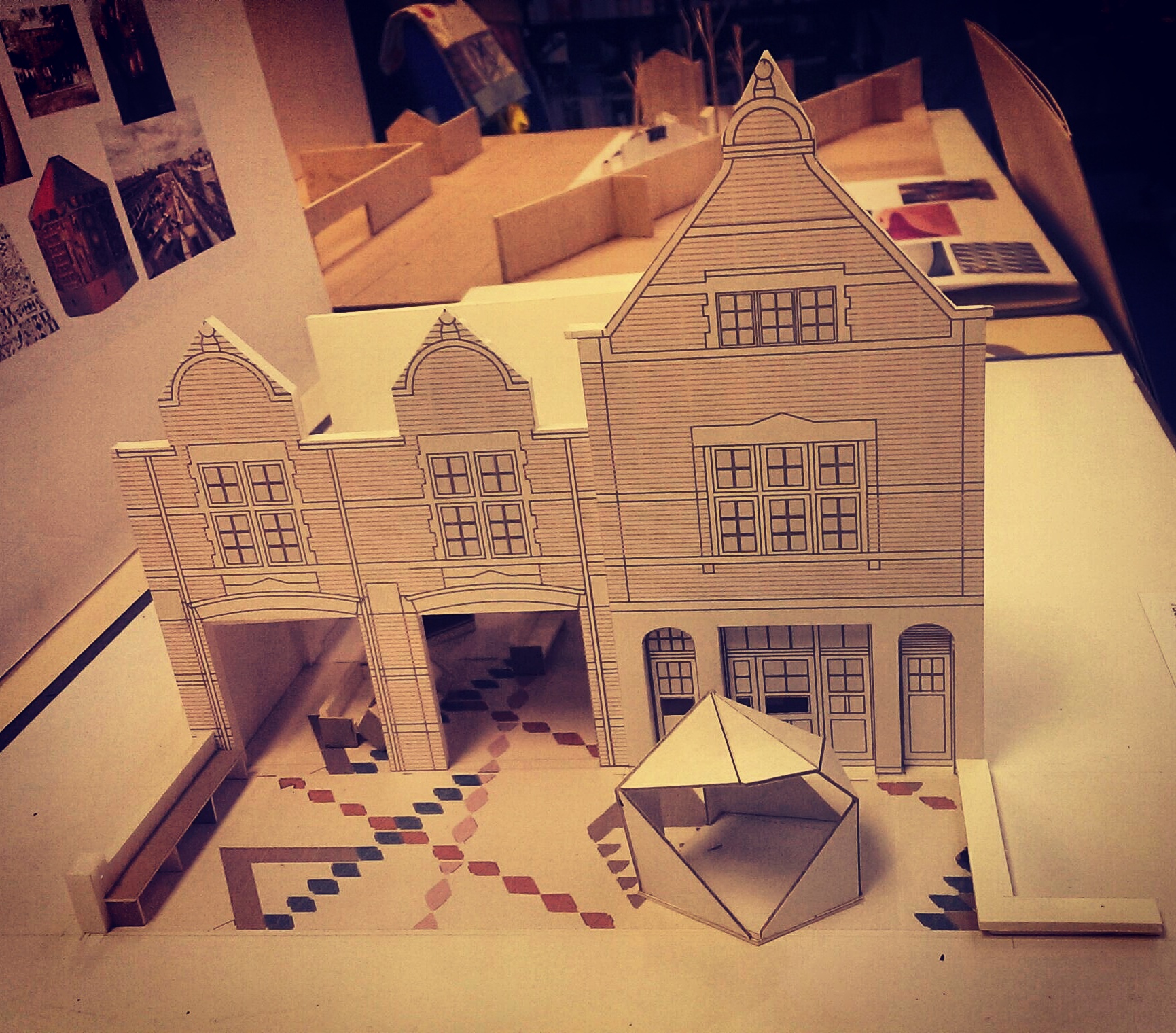 As background, the library shut its doors for a few months in summer 2015 after the Council decided to stop funding many of Newport's community libraries. However, the Council agreed that Maindee Unlimited could have use of the building; the library was taken over by the volunteers and it became the base for the Finding Maindee art project in January 2016.

Meanwhile, in the background the trustees of Maindee Unlimited were working on a plan to secure a longer-term future for the building by applying to be part of the Big Lottery Fund's community asset transfer CAT2 community building programme. The pursuit of the community asset transfer led to plans being developed for a refurbished library and proposals for the traingular-shaped outdoor space on Livingstone Place.The local planning authrority granted permission in May and then we waited for the funding decision from the Big Lottery Fund.

The rest of this article explains how a year of trying different approaches has led to one that we hope will work...

The Finding Maindee project, funded through the Arts Council of Wales 'Ideas: People: Places' (IPP) programme, had always wanted to find a locally-based space for indoor art. The prospect of using library was not on the agenda when the IPP bid was prepared in 2014. However, fast forward to summer 2015 and it became clear that use of the library building was a great opportunity to host workshops, meetings and also for exhibitons.

Moreover, there was a chance to apply to the Big Lottery Fund for some of the Community Asset Transfer [called CAT2] money announced in May 2015. The Big Lottery Fund's aspirations for CAT2 seemed very relevant to Maindee Library:

"We believe the ownership of community assets can encourage people to become more actively involved in their communities, influence what happens and take part in decisions."

A project team was formed by MU to bring the library - and the outdoor toilets opposite on Livingstone Place - into long term community ownership. An application was made for development funding: it was successful and MU were then able to appoint a professional design team to develop the project proposal.

Maindee Unlimited tendered the job and it was won by a team led by architect Huw Meredydd Owen from V&O, artist Pandora Vaughan and also including Maindee-based architect Mike Greenwood. The team worked to the Big Lottery Fund's timescales to develop proposals for the both the library [full refurbishment to include a cafe, meeting rooms and activity space] and Livingstone Place [new toilets and space for events / market]. Huw is seen below showing his model to library volunteers in March 2016. 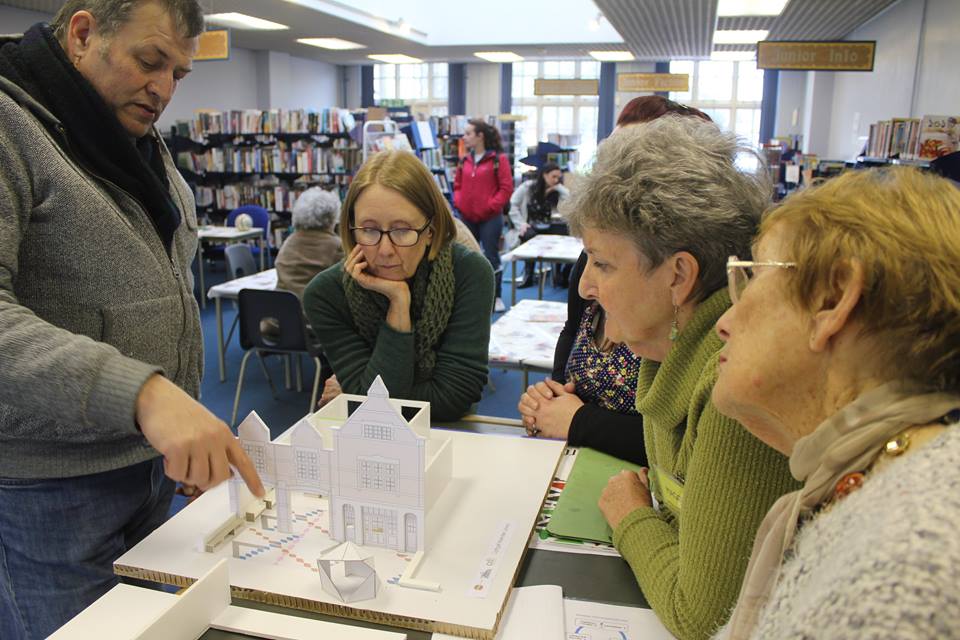 The application process was very clear. The Big Lottery Fund were always very strict with their timescales, but generous with their advice and access to professionals. There are many people to thank for the drawings, plans and legal agreements being developed on time to meet the planning applcation. A complete set of designs can be seen by enterring the reference '16/0235' or '79 Chepstow Road' on the Newport Planning Portal.
The project team got through every step step of the process set down by the Big Lottery Fund and also managed to greatly develop the relationship with Newport City Council. For example, the terms of leases for both the Library and Livingstone Place were developed and much more detail was discussed. A community asset transfer was getting ever closer...
In May we heard that full planning consent had been granted. A few days later the finalised bid for the Library and Livingstone Place - also with money to employ some staff- went in to the funders. We had over 5 months to wait until the decision.

Waiting for the decision during summer 2016

With time to think it became clear that CAT2 funding was not the only option for the library. Our volunteers had been asking questions about whether the library could continue when the building was being refurbished. There was no clear and easy answer to that question. From the perspective of the Arts Council of Wales (ACW), as IPP funders, there were concerns about the library being too led by the economic outcomes of CAT2 rather than creativity.
In terms of process, ACW also raised questions about the role of creative and organic interventions if the building and the Triangle were to be developed as architecturally-led projects. For those not experienced in architecture, most big refurbishment projects rely on very specific drawings and one lead contractor. Contractors normally want to have clear lines of contact with their clients: the prospect of having artists and volunteers getting involved is generally unappealing to them.
In response MU explored ways of splitting the development to maybe include a temporary library somewhere on Chepstow Road. The Arts Council of Wales also helped by bringing in architect Niall Maxwell [below] to help us take advantage of the thinking time before the Big Lottery decision in late October 2016. 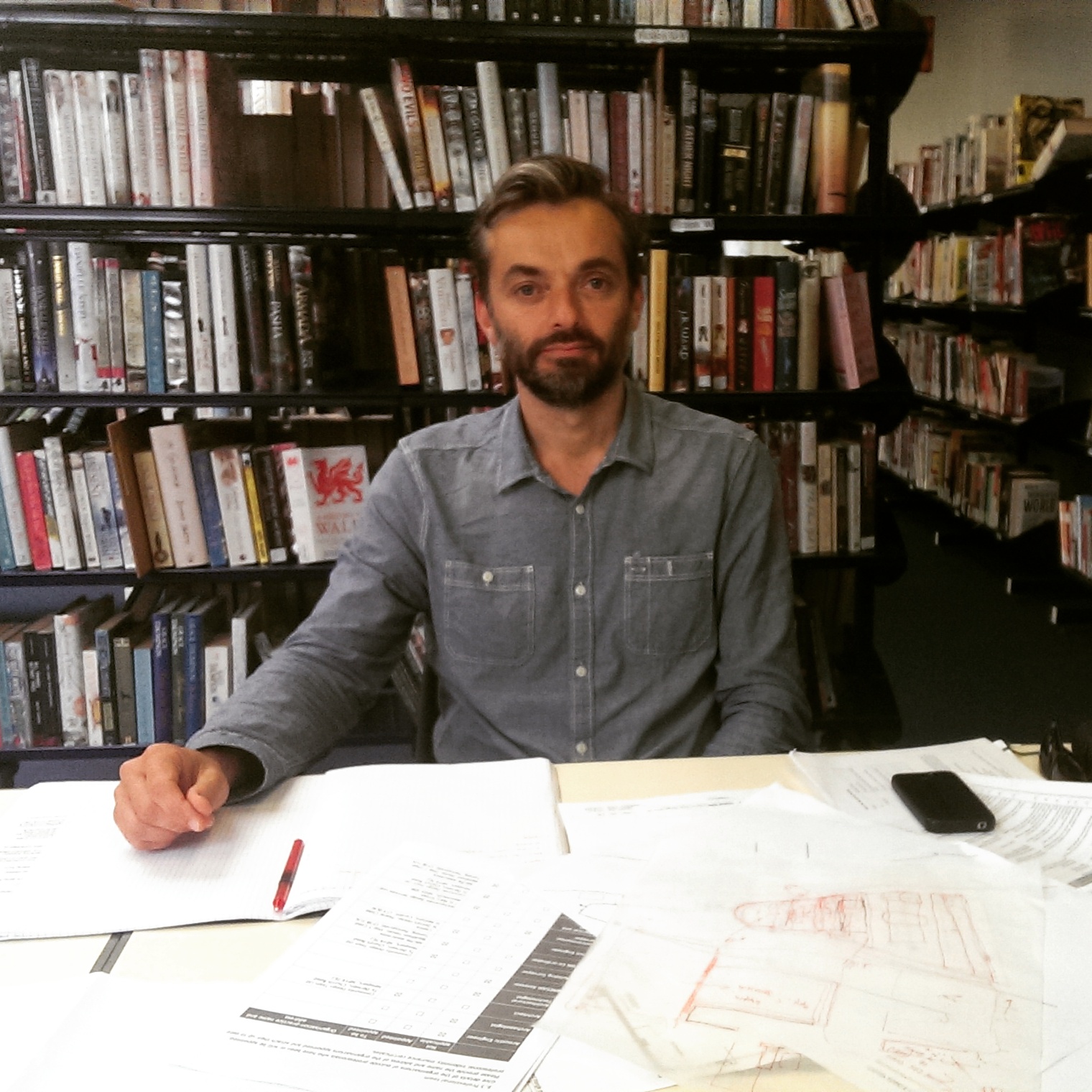 Niall helped us to consider the practicalities of developing both the indoor space [library] and the outdoor space [Livingstone Place] - suggesting phases and some interesting temporary uses of space. He also helped us to see how the community could get involved in decisions - as could artists. The work helped to see that a creative method could be applied - tapping into the work that Mr & Mrs Clark had just tried on Livingstone Place by inviting the neighbours around to paint.

And the Big Lottery decision...

In October we had the answer - and it was a no.
The Big Lottery Fund told us that they would consider a re-submission for the library element of the project, but they were not keen to support the proposed developments on Livingstone Place. Looking straight away at the negative factors:

On the other side, this situation provided opportunities such as:

The trustees of Maindee Unlimited, alongside library volunteers and others reflected on the situation across two workshops and a further presentation.
The  group saw that they were not necessarily in a bad situation and saw that it would be possible to build something slowly. The example of Stoke Croft - from our visit in December - gave a lot of inspiration for what could be achieved with determination and some bravery.

Now we are about to start planning...

Christmas has been and come, we have relaxed a bit and now 2017 has arrived. The South Wales Argus visited the library last week and published an article on 6 Friday 2017. 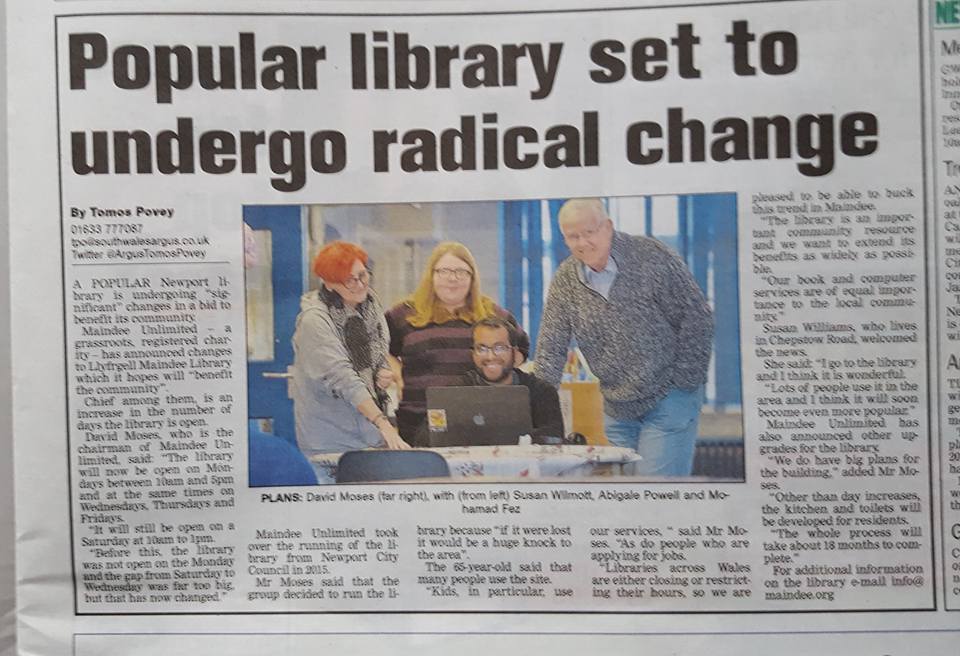 The challenge is now set to re-make the library. It will not be 'radical' in terms of being expensive, big and flash; instead lots of people will be mucking in and some bold requests made - particularly to any plumbers who can help with the heating! If you would like to contribute to the re-making of Maindee Library, please get in touch with @MaindeeLibrary via Twitter, Facebook or Instragram our or on info@maindee.org.
Here's to an exciting 2017!