We are making a lot of progress with our food and drink serving counter since architect George Lovesmith [pictured below left] connected us with a group of architecture students at UWE in Bristol. We wanted something that could be moved around the building and even taken outside for events and last week we tried their life size mock-up at the Library Soup event [Weds 25th October].

The group of four [pictured left to right – Sammy, Matt, Verity and Brad] have been given a budget to make a product and will be presenting their work to us on November 16th. This blog article adds more to the intitial research [17th October] and shares some of the feedback from the library soup event...

By serving hot drinks and soup off the counter - and taking it all outside - we got some great feedback for making the real thing. Verity, from the group, said that:

"At the event we tested our 1:1 prototype of the mobile cafe to observe what would be needed at such a event which would influence the design of the real cafe that will be constructed shortly in the future. The event was a success with the prototype tested inside the library, whilst the soup was being prepared, and outside once it was being served."

The short Instagram film below shows Matt wheeling the cafe out from the library and onto the space in front of the building. 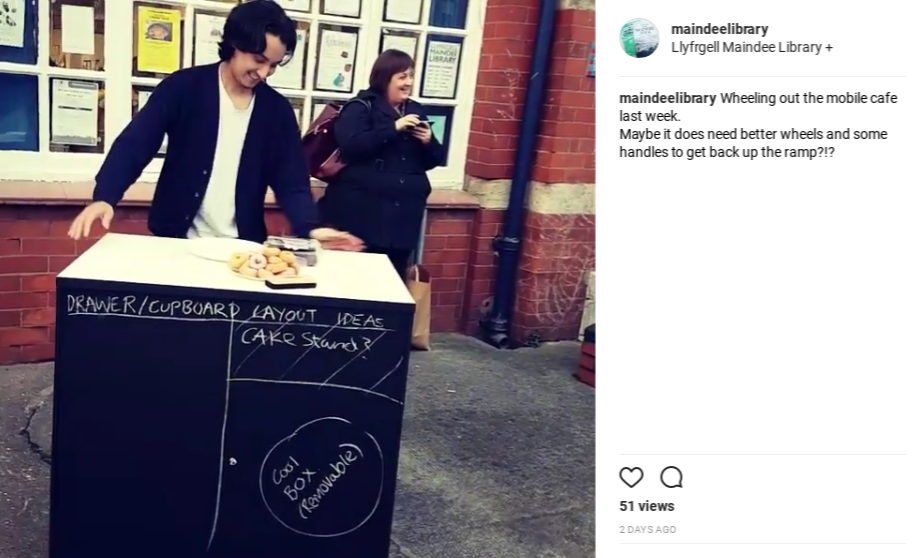 Initial conclusions from the event

After receiving lots of really useful ideas from Maindee community, Maindee Unlimited volunteers and George and Sarah - the architects working on the library ‘refresh’ scheme - and observing what worked and didn’t work from the prototype, Brad, Matt, Verity and Sammy made the following conclusions from the day.

Aesthetically, it was suggested that including some transparent polycarbonate material into the design could help integrate it into the library refresh scheme. See below and there is more about these ideas in the design guide for phase of work. 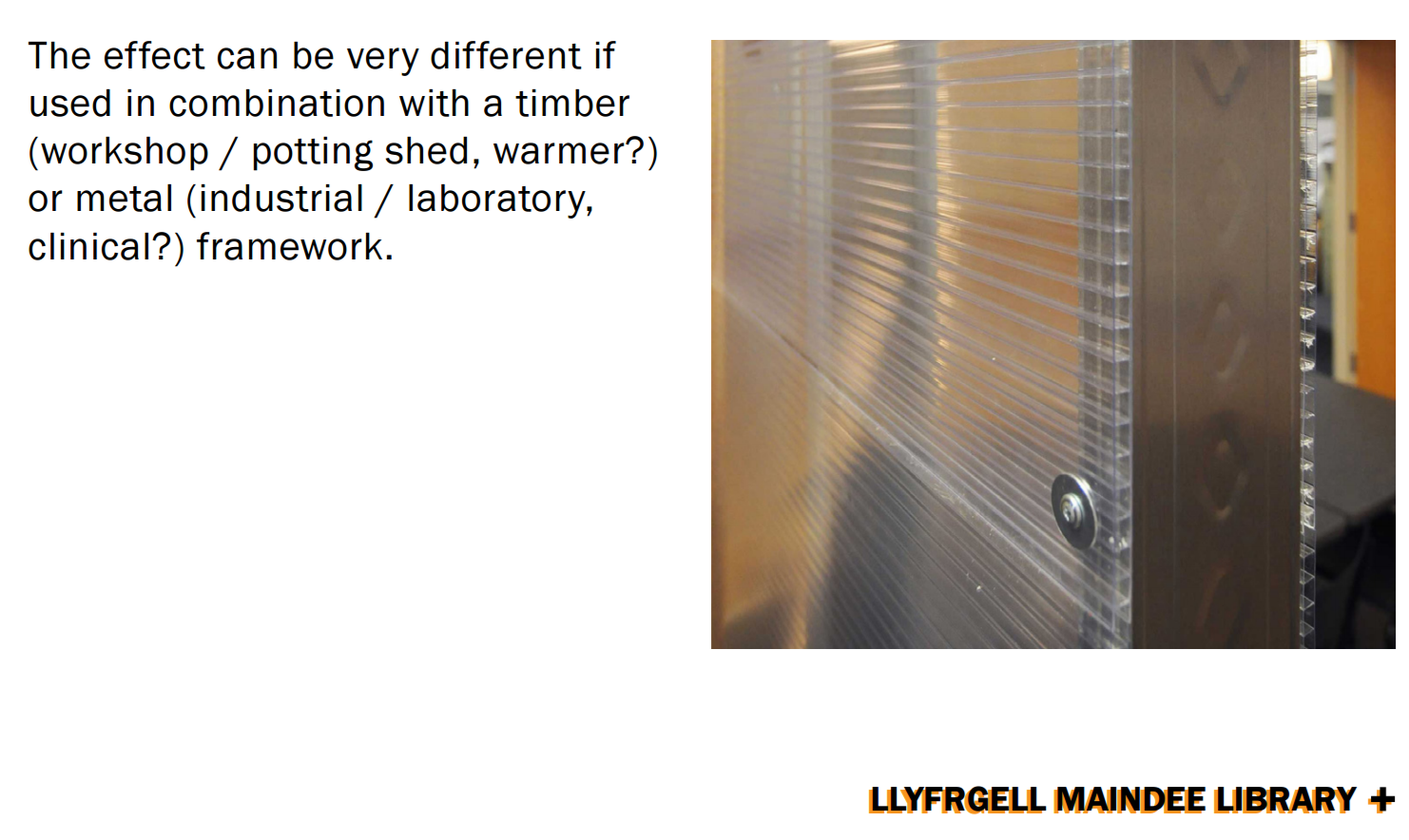 Enthusiasm from our architectural team

Architect Sarah Hollingworth, working us with at the moment, felt that that the event was really useful to progress the design of the mobile cafe. She was pleased that we could see how it could be used first hand as:

"It gave us the experience to see for ourselves the type of provisions that would be necessary for some of the events which the library hold.

For example, having an amazing younger participant Evie brought to life how the mobile kitchen could cater for young users, for example, after-school cookery club. Also the potential of the mobile kitchen being important as a signifier of activities as well as functional. So including in the design ways to signpost that things are happening – where an actual sign, its colour, a flag or canopy design…." 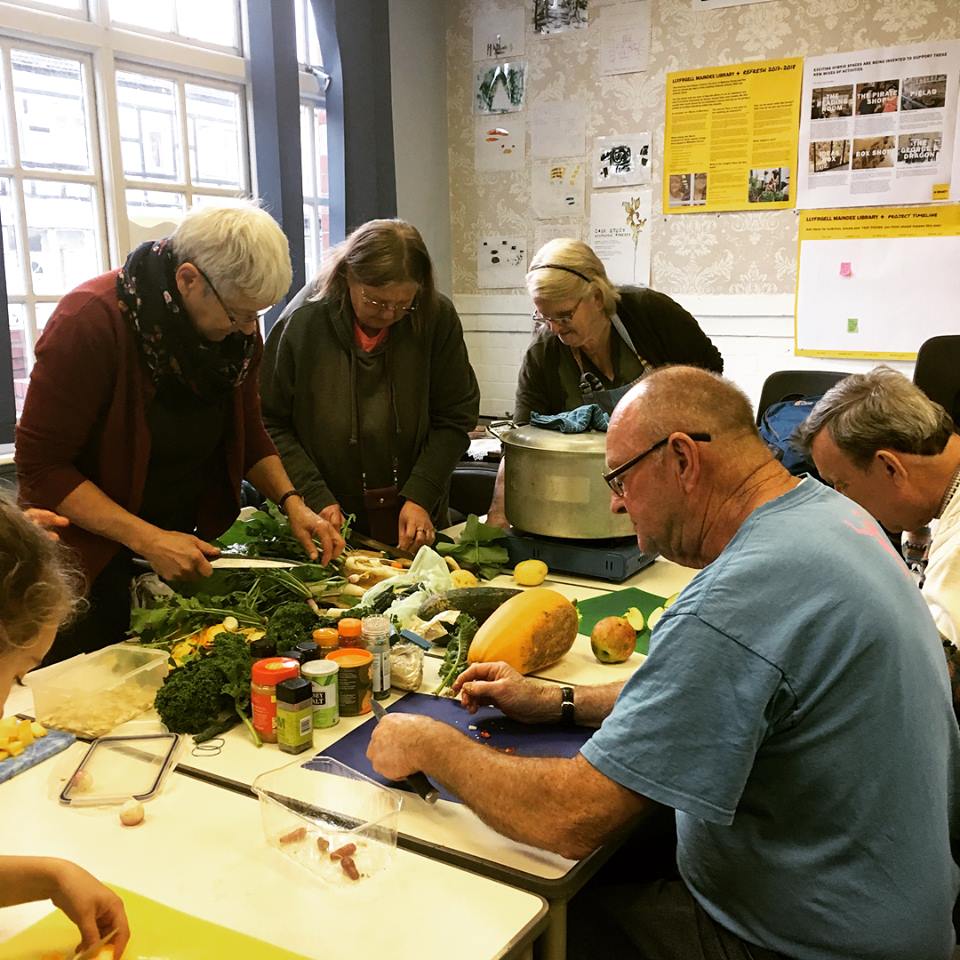 The counter also got used for the Newport Photo Marathon on Saturday 28th October, where Maggie and Trish tried different places within the library to position the counter. All in all, it has been very useful - and that's without featuring the improvements above.

Verity shared some other thoughts about the piece that they eventually produce:

"Suggestions for the shelter element of the structure included a large umbrella for use outside, large enough to cover the work surface, the people serving the food and the customers, whilst other comments suggested that a more permanent roof structure could be used to attract attention when inside the library as well as outside. Shorter work surfaces for disabled access will be required in the final product and a reduced height again to allow children to cook on the mobile cafe was also suggested.

One of the main observations from the event was that the allocated size for the mobile unit may not be large enough for some of the events, such as the soup event it was tested at. A additional table was taken outside of the library to complement the unit as the amount of workspace was limited. Options to further the worktop area whilst staying within the allocated 600x1400mm area will be investigated further, such as fold out areas to allow for additional room, whilst staying at the initial size when stored."

The student group would like to thank all of the volunteers and members of the community who attended and helped to give us useful feedback and look forward to seeing some of you at the Toilets: Public Space: Social Justice event at the library on November 7th.

The group will also present at the New Paths Gathering from 6pm on Thursday 16th November.

Design ideas for the use of polycarbonate