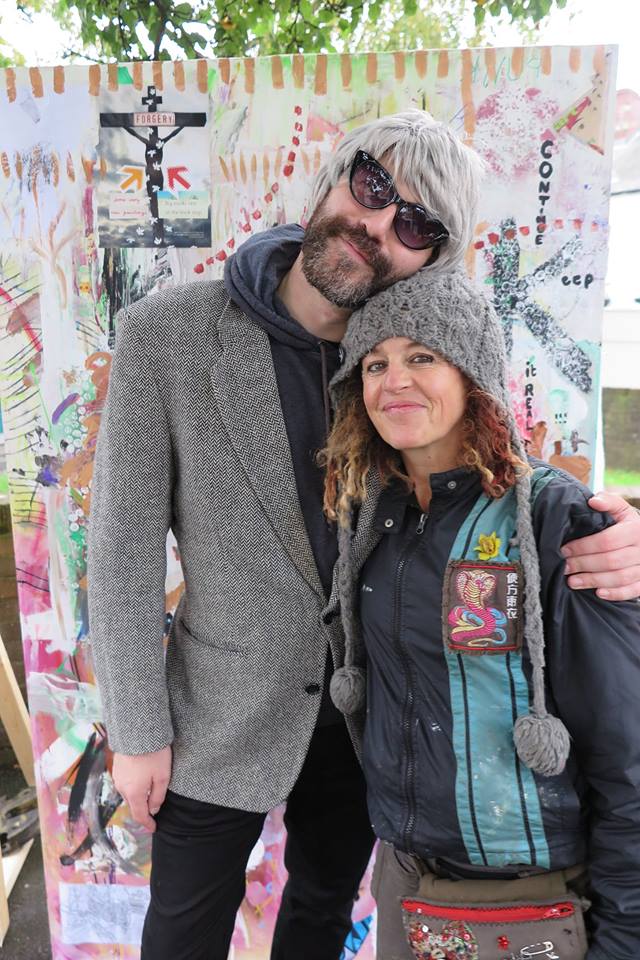 One of the aims of the whole project has been to discover what the space between Livingstone Place and Chepstow Road means to people. Barrie explained that the location was exciting to work within as it has a recess that was hidden [and covered from the elements] but still visible by the road. Of more interest, he learned from one of the neighbours that:

"... the area use to be a centre-piece for the Maindee area. It was a base of a fountain."

Today the shelter with the bench [photo below] is where people go for a smoke and to stop and chat. In Barrie's view the shelter needed brightening up; using washable chalk has become a new medium to animate the space. 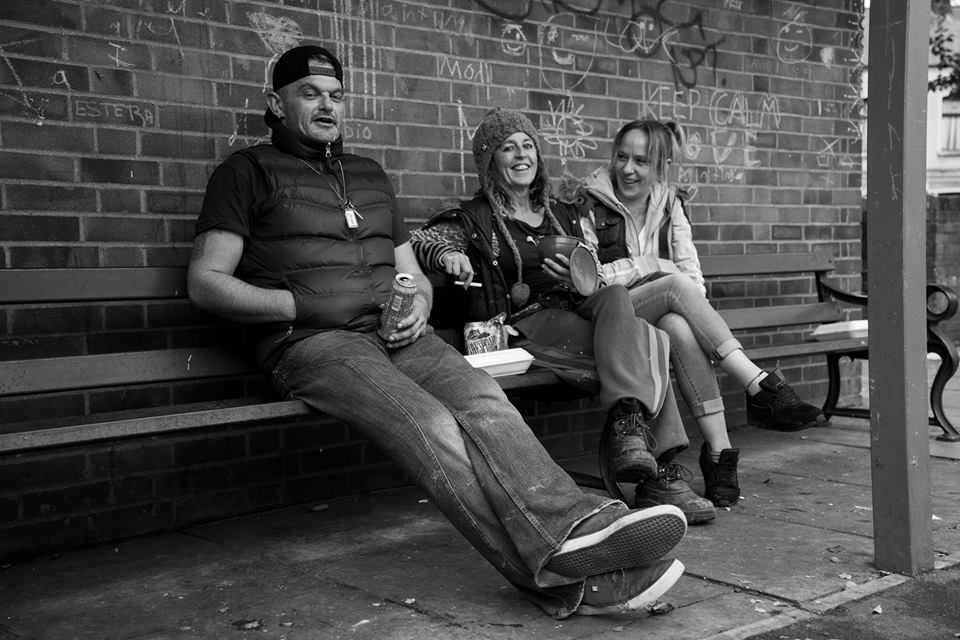 Looking deeper in the site it seems that the state of the toilets have been synonymous with the condition of the whole space. For local people this art project has becomes a place for discussion about what to do with the land.

Though it has mostly been the cheeky actions of some artists involved, the phone box has become an impromptu exhibition space for imagery. Lots of people are getting to see that this space could hold different events and shows in the future.

Today Rohan from Sounds Alive came along and joined in; to develop sounds and to help produce some music. Barrie thought it was a great idea to collaborate.

One of the things that we have seen over the week is that adults take a little while to get involved. Today the Roma mums decided to get involved, which was a great to see. 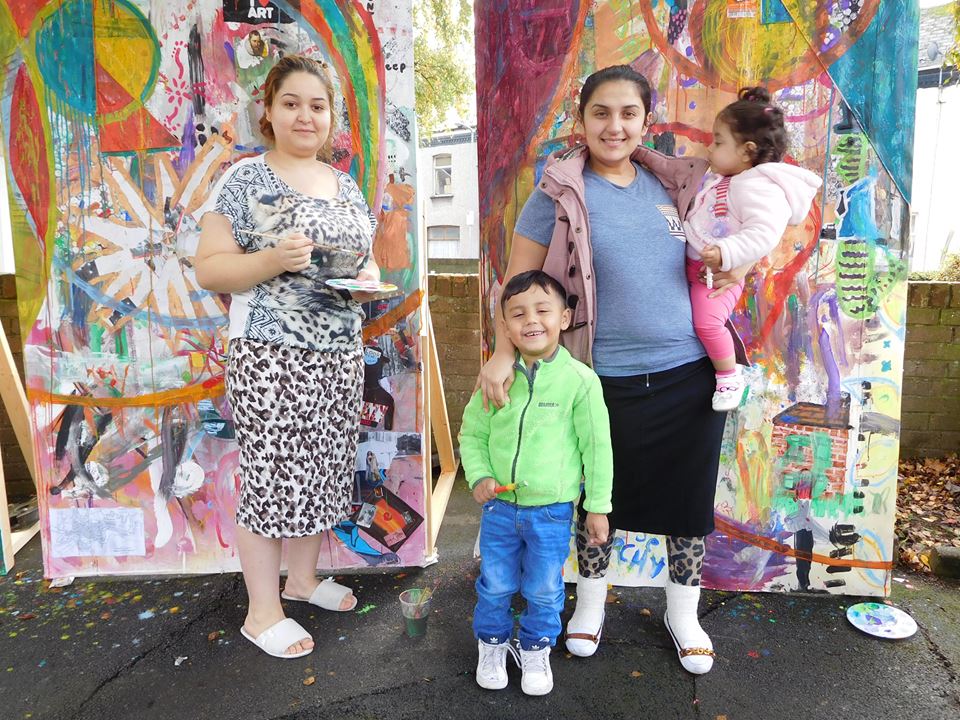 One of the reasons why they hold back is because their children - the first generation of Newport Romas - have acted as translators and the bridge to communities. Barrie said that:

"It was great to see the parents just dive in."

One of the participants said that the art was:

It seems that the painting helped her focus some energy. Teaching people to make giant circles became one of the point in the day that was exciting. Barrie explains that one lady normally paid so little attention to painting that she doesn’t even decorate the kitchen!

An older lady said that she had decided to plaster the colour yellow in a large section of the wall after today!

The real people of Maindee have stopped and shown interest

Apart from Maindee's newest neighbours Barrie also got to meet Lloyd Gittins - who runs his business HP 90 Customs in Maindee.

Lloyd customises trainers, leather goods and other products. He had seen Bill Chambers do his print making session on Tuesday and spoke to him about what he does and how paint interests him. Coming back again today Lloyd said:

"It's exciting to see something different and creative in Maindee. The real people of Maindee have stopped and shown interest. I've felt that in Maindee there are not a lot of painters - it makes me feel a bit lonely here but this project has excited me to pay more interest to other local work and uplift myself to make new work and possibly get involved a lot more."

Lloyd explained to us that paint helps him to relax and express himself: 'down moments as well as up moments.' He captured things beautifully when he said that these arts activities can:

"... get people to understand that people can explore themselves and help with expressing emotions and thoughts. Painting a picture to me is a simple way to communicate."

In terms of basing a business from his home in Maindee Lloyd says that:

"I think the internet has really opened up doors for me. I have an Instagram account that has opened up my connection to the World; knowing Maindee is a small place (and audience) for my work I'm thankful I can use Instagram to connect with people." 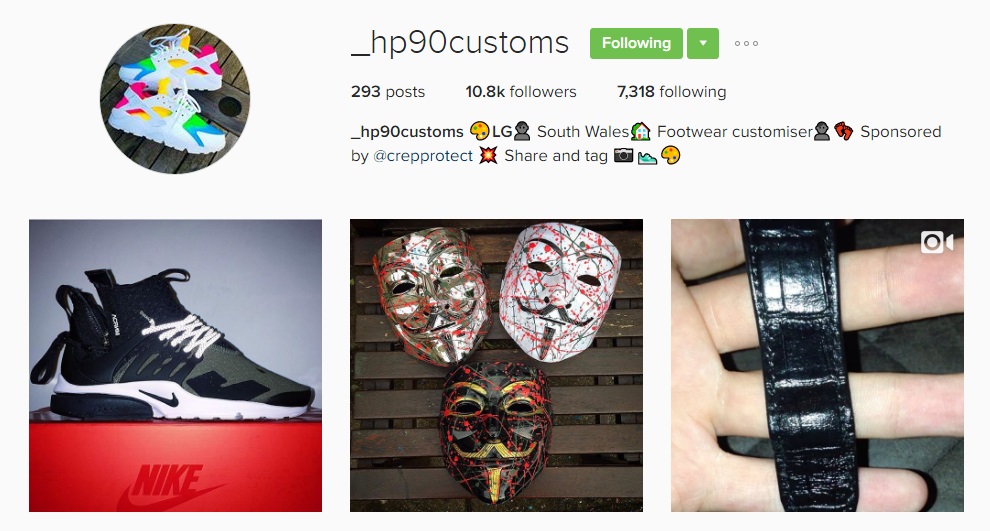 Lloyd has over 10,000 people following him on the internet, which is more than any arts venue in Wales. For example, the artist most likely to win the 2016 Artes Mundi prize [Bedwyr Williams] has only a third of Lloyd's following and Cardiff's biggest cutural venues such as the Wales Millennium Centre have fewer than 1,400 followers and Chapter Arts Centre has just under 2,000...

We had to ask Lloyd so why trainers? He said that:

"Trainers have always been a kind of fetish or obsession for me. I've become fixated on what they are and how people use them and express through them and use them to share kindness with others. My Nan always got me trainers for Christmas. As a medium it's exciting to use something so commonly used."

"I don’t think people see shoes as being customisable. It's a conversation I have every other week. We are expected to stick to what brands sell us and that being the end of the customisation."

In his own way it seems that Lloyd is a very powerful artist: as he says his is bespoke work on people's feet. His pieces are all one of a kind and can’t be copied exactly the same. What is [or was] a mass-produced item is then completely unique to the owner.

The final day of Inviting the Neighbours is hosted by Steve Jones. We will all be sad to see the week end, but Steve has been there throughout the four days and so will have a unique chance to conclude things... Steve will also be making a film of the week.