On Tuesday 13th June we had a powerful and enjoyable evening which concluded the Gwent Arts in Health creative writing sessions held at Llyfrgell Maindee Library during May 2017: the Healing Words project.

The session was introduced by Mike Church and was a chance for members of the writing group to read out some of their own work. We also heard from other Newport poets and were able to connect with other people in south Wales doing pioneering work with community building. 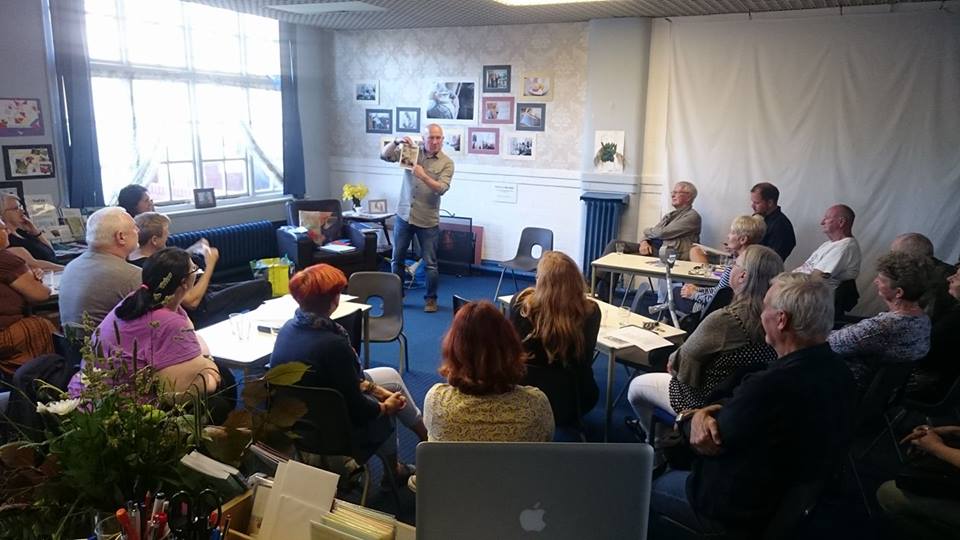 We are grateful to Sarah Goodey from Gwent Arts in Health for managing this work in the library and also for sourcing the funding and other support from the Gwanwyn Festival, Literature Wales and Newport Live. This blog article provides some reflections on the evening.

The session started with Sarah Goodey warmly introducing the Healing Words project. For Sarah the work came from a desire to encourage people to return to writing, particularly to pursue the Gwanwyn Festival's aim of supporting creativity in older age. As such, some funding had been put behind the the weekly sessions and the group were able to have Mike Church as the faciliator.

Mike made an instant impression with the audience of 30 people. He explained that he felt strongly about libraries and had been involved in a campaign to save a library in Rhydyfelin, near Treforest. Mike recalled how he and others had chained themselves inside the building and how this had featured both in local media and also on Radio 4 PM Programme.

A nice touch from Mike was to personally introduce Chris and Gayle who had taken over a former library in Ynyshir to form the Workers Gallery & Workshops and were also involved in the community-run Cynon Valley Museum in Aberdare. To further Mike's cfredentials as somebody supportive of community libraries he quoted writer Cailtin Moran in describing libraries as:

"An emergency exit, a life raft and a festival."

The power of writing

Mike chose a number of poems that had inspired him and also entertained us with a story about how he had formed a bond with a small boy over a picture book. He went further to add experience about how he had led writing sessions at a prison; the words from one prisoner had been so powerful that he felt they had discouraged a group of young men not to risk being incarcerated themselves. 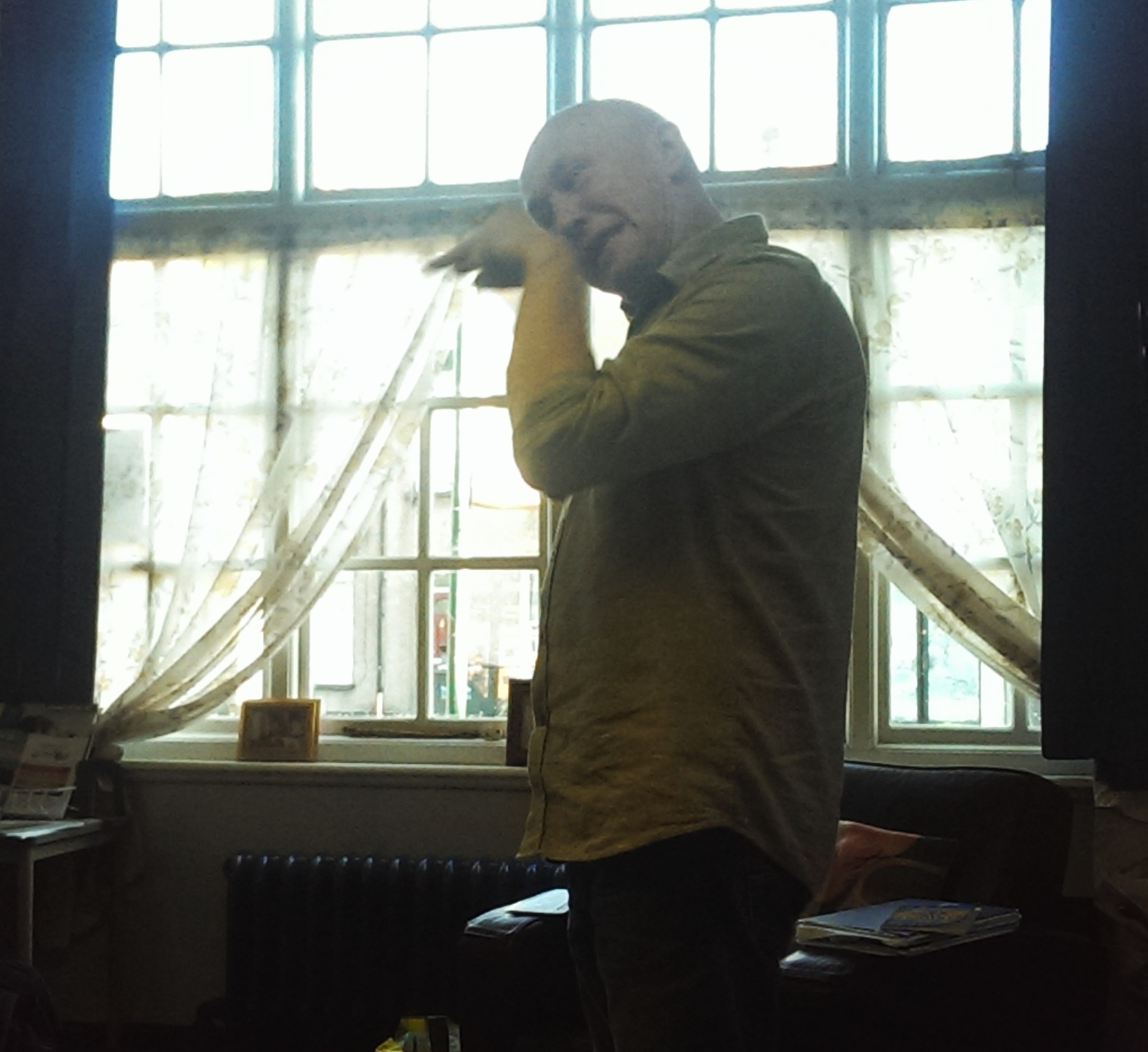 Mike [pictured above] explained what he consider to be the three bases to poetry and writing: (1) that you have to read work by other people; (2) that you require a love of words and (3) that you have to practice form.  As Mike explained his method for leading the creative writing sessions he was able to connect with the participants: he called out names and mentioned something they had said and done during the sessions in May.

There is no doubt that Mike had entertained the workshop participants during May and that he had also helped to develop their confidence.

Hearing from some of the participants

We heard many lines from people who had formed the Maindee Library writing group. For example Carol gave some perspective on holiday trips to the seaside in the past when the scallop had been something simple, though had since gone upmarket. Susan made some comparisons betwene Cardiff and Newport over the years. She also wrote about a personal story of how back scratching had been a 2-way thing in the past, but that she now preferred yoga.

From these two excerpts there was a sense that this writing helped to explore habits changing over the years; with the words conveying both curiosity and a prevailing sense of humour. On a poignant note we also heard Keith's description of life as a bird of prey: 'a free spirit of this World.' Keith also described the Angel of Newport and how our city will have better days.

Carol [pictured below] entertained us again with a long piece about being a 'kaleidocardiac'; how she had learned to tell 'azur' from blue and telling the 72 shades of green. Her writing was very humorous and came out so well in her own voice. 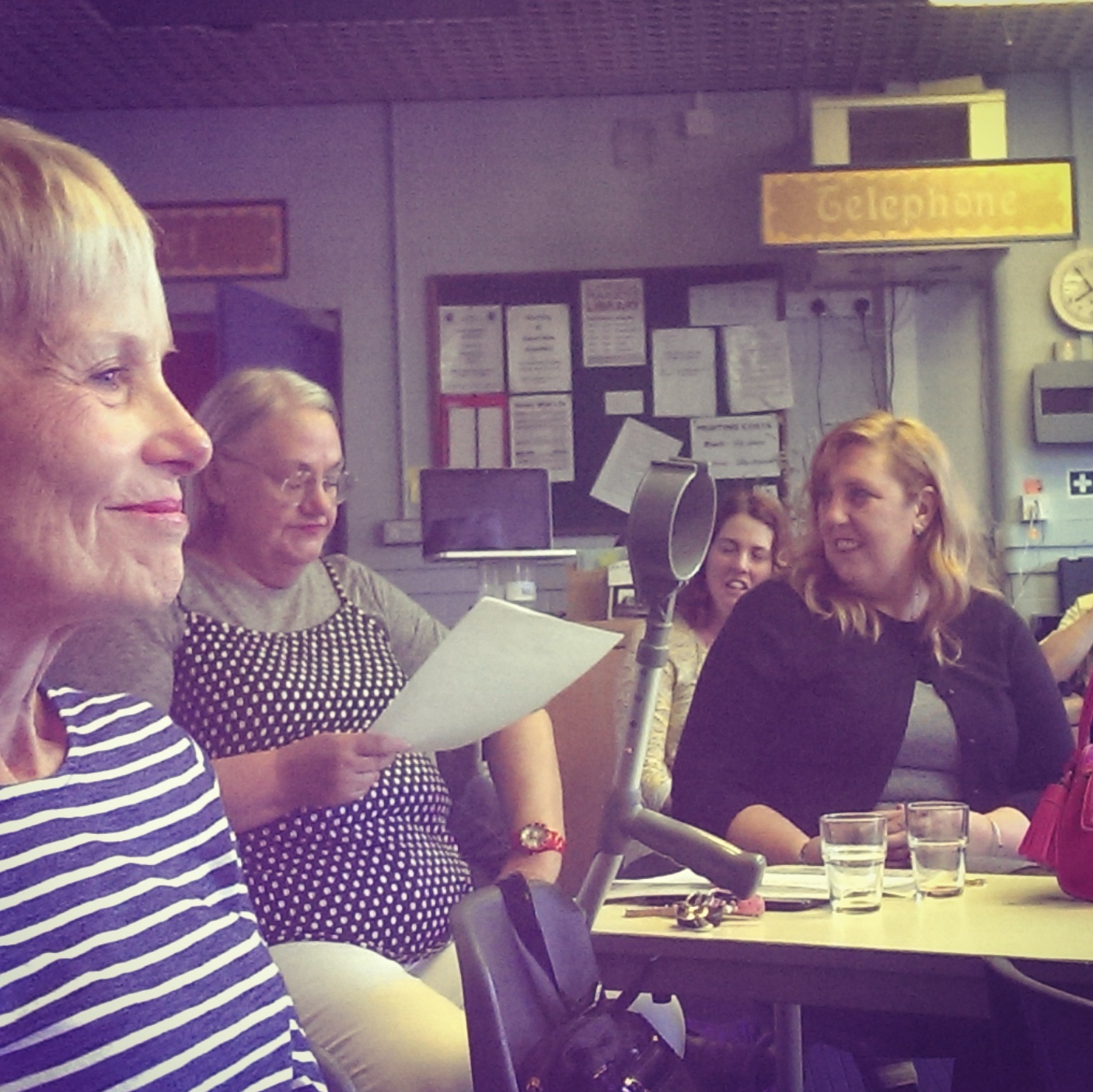 The evening concluded with Chris, who had been involved in another creative writing session that Mike had previously run in Newport. Chris is a tall man with a bass voice who took to the stage with ease; he recalled how he has lived in Newport for nearly 35 years.

Chris told us that he had an ability to remember things and how this has helped to tell stories of his nights out in Newport. As he spoke about getting older in the piece called 'When I leave' he brought forward some powerful lines, such as:

"Clinks the heights of my own self-expression."

In another poem called 'The Seekers' Chris dropped a pleasing rhyming couplet; 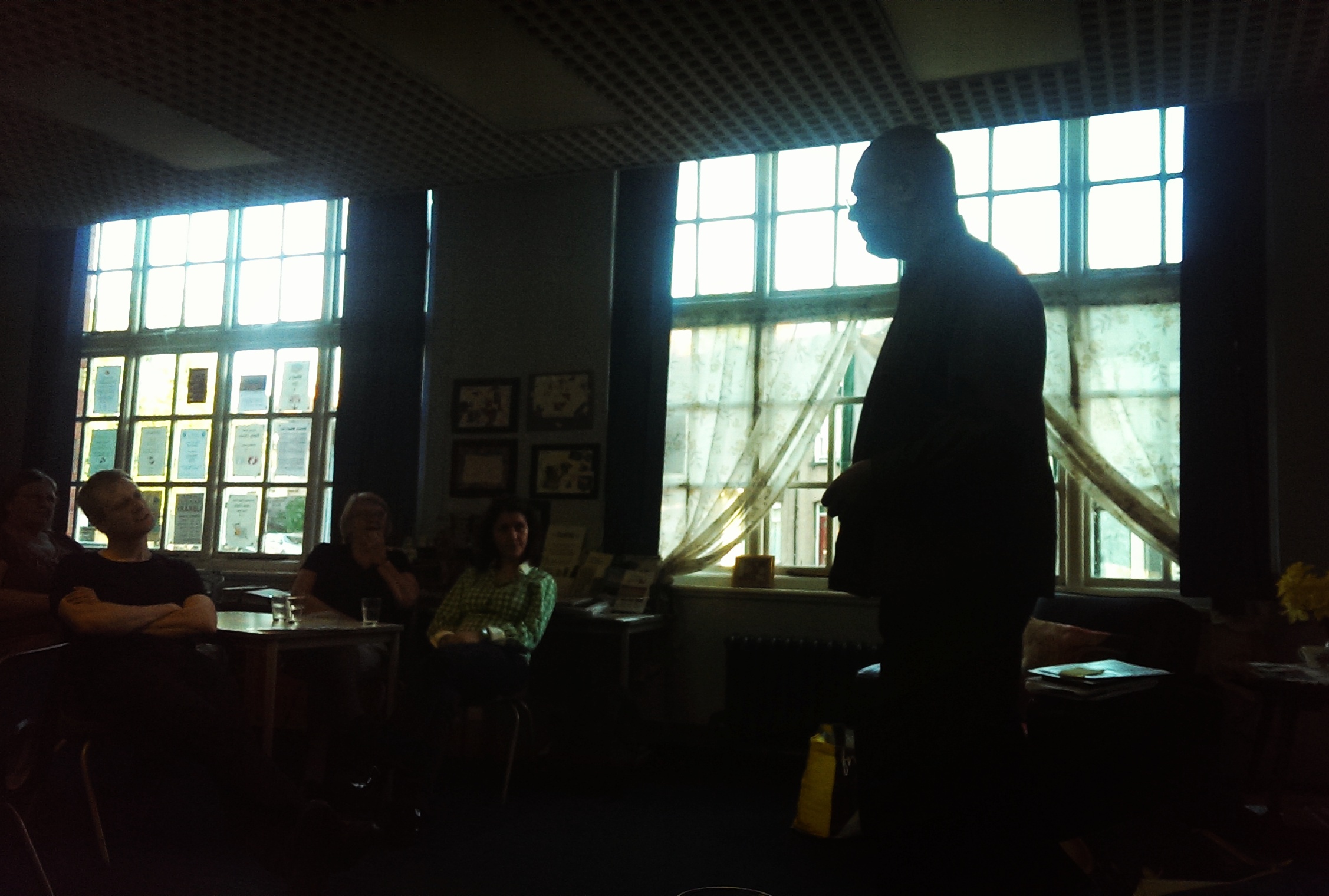 Chris [pictured above] concluded his performance with a rendition of his verse 'Old Man Isca' - sung to the tune of 'Old Man River.' Rhian Hutchings, from Operasonic, commented that he had an awesome bass baritone. Looking back on the evening we hope that the words and ideas from sessions such as these will all connect up with the wider Finding Maindee project; for example appearing in Operasonic's Newport Legends performance at the Riverfront on Sunday July 2nd. It is very pleasing that people like Sarah Goddey and Rhian Hutchings have invested so much time in Maindee and into the library movement.

More to experience at Maindee Festival on Saturday July 1st

Sarah concluded the evening by reminding us that the Spoken Word tent will be present at the Maindee Festival on Saturday July 1st. The parade through Maindee starts at midday and the activities at the festival site are free and held between 1pm and 7pm at Maindee Primary School. For more information go to www.maindee.org/festival

The Riverfront and Newport Live