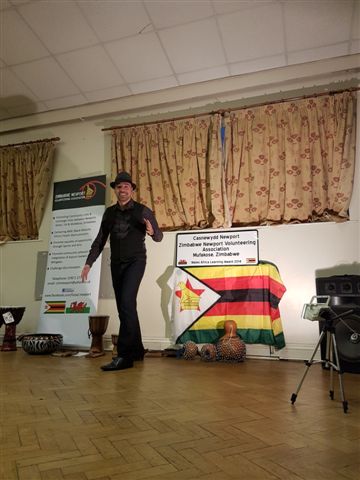 'As I enter the final month of the Theatre for Change project I am struck by the resonance it has had in the community. The process, of using theatre to build relationships and then following those relationships to where they lead, has also disclosed a new understanding of Maindee community to me: that it is composed of residents, yes, but also of "participants" in Maindee community from beyond its borders.'

Since the last blog update Ismael has performed  to some 100 more people in more homes and community spaces, including Community House in Eton Rd, and micro-communities including arts networks, friendship networks, Zimbabwean networks.  Many of the invites to perform come from chance conservations, such as a chat at the launch of 1,000 Voices at Community House which resulted in a performance at a Zimbabwean event later that evening. Of these differen experiences Ismael says that:

‘The play continues to engender powerful and meaningful conversations that create emotional connection and, in a proportion of participants, a desire to share, create or collaborate. The result has been the seed of genuine friendships and a burgeoning of possibilities, projects and invitations to perform and build community, in Maindee, but also Newport, Cardiff, Caerphilly and Monmouth. This response and the invitations have included local residents, artists, community builders, churches, refugee organisations, family workers, etc.’

Finding Maindee by looking outside

Although our project is called ‘Finding Maindee’, and all of Ismael’s performances to come are in Maindee, he reminded us that people in Maindee don't live in isolation.

‘When a Maindee resident invited me to perform in his home to all his best friends by way of thank you, they were mostly from Cardiff. When I performed in the library, both times, the audience came from Maindee and wider Newport. When I performed in Community House for the Zimbabwean group, the organisers were from Maindee, but participants came from wider Newport, Cardiff, Caerphilly and Monmouth.

When I performed to the other youth group, two of the youth came from Pill. In conversations with shops and restaurants not all owners and certainly not all workers live in Maindee, but if course they are all part of the community. I have also of course also performed for many local residents in the process, and built friendships and collaborations.’

Commenting on Maindee as a place and a people, we understand from Ismael that:

‘This experience reveals Maindee as an open, extended community, a hub that goes beyond its local boundaries in networks of friendship, of culture, of faith, of service and of work. I think we could learn to harness and grow further the potential of Maindee as a creative, multicultural and community building hub for the city and the region.

In the weeks ahead lie more performances and collaborations. I would like to "open" alternative venues to theatre, which don't currently have the arts on their radar, and am exploring a tiny local cafe and a hairdressers. I am thinking of doing two full 1 hour performances in 2 different venues by the 24th of March, and a community building gathering as conclusion to the project at my home on the 25th March.’

In between now and the end of the project in March there are several more micro-performances lined up ahead and wonderful collaborations building beyond the lifetime of this project. For example with fellow artists, neighbours and community workers met through this process. Ismael concludes his thoughts on where he is with the project to date:

'I feel more connected than ever to Maindee, and to Newport, humbled and inspired and deeply grateful for the response to the play, for new friendships and new colleagues, and for the sense that what comes next will build on this and make a difference: together.'

Launch of 1,000 Voices at Community House