On Tuesday 27th February over 30 people squeezed into the Holbrook Studio on Chepstow Road to meet Stuart Farnsworth as he explained the story behind the 188 pages of raw data found in the 2017 Maindee Nonsensus.


According to his clipboard Stuart met 12.85% of the householders [and homeless] living within Maindee. Some of the responses to his 3 questions were short, but some people shared personal experiences about their lives and one lady recited poetry. At one property Stuart’s singing technique was tested. All of these words, including the ‘yeahs’, ‘ha has’ and ‘innits’ are faithfully recorded in the book. 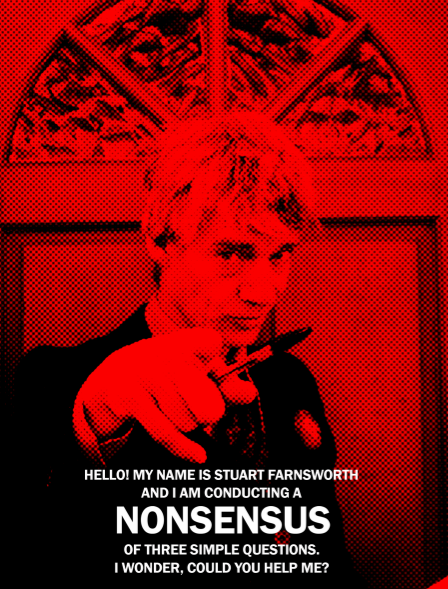 This blog is account of the Q&A session. Although Stuart recorded the whole conversation - and could potentially type if out two-fingered as he did for the book - we have had to interpret and group together some of the conversations. If you want to get a copy of the book there will be some copies for sale at £10 in the Maindee Library and the pdf can be downloaded here.

The Nonsensus was conceived by artist Steven George Jones and financially supported as a New Paths project. According to the plan Steven George Jones wanted to use Maindee as a geographical canvas to meet people: the Nonsensus would challenge the conventional methods used in state-sponsored Census; it would explore how we manage to find any meaning within data. The Nonsenus would include two stages: firstly Stuart would try to meet up to 2,000 households in the Victoria Ward and conduct the survey; and secondly 5 invited artists would be given the raw data and be given the chance to interpret it as they wished. The purpose of this evening was to mark the end of the data collection stage, to read the raw data in printed form and then work out what would happen next.

Although Stuart Farnsworth claims never to have met Steven George Jones, the latter is certainly the architect [if this is the right word] of the overall project.  Steven George Jones has talked about Stuart Farnsworth and the fourth wall of community art. The term fourth wall is borrowed from theatre and means for the artist/actor does not to reveal that they see or acknowledge the audience. In this case the artist must remain in character as Stuart Farnsworth and not present themselves as who they really are. However, Stuart does want to break that wall and this Q&A was part of the slow reveal.

The session was started as an interview between Stuart and Aled and later developed into a wider conversation with the audience. Throughout the 90 minutes Stuart had copies of the book placed on a low round table in front of him. Stuart wore a simple grey suit with a yellow shirt and a tie largely orange in colour with some blue detail. Stuart was in a relaxed mood throughout, although he did not reveal too much about his past and why he had chosen this part of Newport to do his survey. On his clipboard was the reminder to keep smiling.

Steven George Jones was not in attendance.


What was the Nonsensus really asking?


One of the most important points that came from the evening’s discussion was that this survey did not ask for specific facts, such as the how many bedrooms people have, what type of job they do or the condition of their health. You can find such data in the Office for National statistics from 2011 - of which a little more in the blog.

Instead the Nonsensus asked people questions about what they would do to fix the World and when people were happiest. One of the comments from the audience was that the Nonsensus revealed what actually matters. Even if you don’t read any more of this blog, then consider the opening approach that Stuart took to his interviews….


My name is Stuart Farnsworth and I am conducting a Nonsenus of three simple questions. I wonder,


Could you help me?


Stuart explained that the most vulnerable person in the situation of a doorstep interview was himself. Would people actually tell him what they think? Would you reveal yourself to a stranger? Stuart knew that people would say no to his request for assistance, but also he had hope that many people would be glad to chat. The pinstripe suit, the selection of ties and the obscure questions were part of that appeal. Stuart described this as something of a clown suit

There was a large strand of the debate from this Q&A which explored the way that there is an industry of data collection, fact funding and evaluation. In truth there was a separate conversion going on about evaluation of the Finding Maindee arts programme  which may have left some people a bit confused. For this reason we will add a separate blog article about this subject. In the meantime, we explore the Nonsenus as a work as art.


Audience member David Farnsworth, unrelated to Stuart, asked whether this book is art. When you take up a copy of the 188-page Nonsensus Raw Data Sic you will see that there are no page numbers and no index. Unless you take the time to read all the interviews there is no way of quickly stitching all of the data together to make conclusions. As we have explored with New Paths gatherings throughout 2017, the art is potentially in the openness of the process and the lack of hard definition.

Dino Rovaretti is a performance artist and will be one of the four artists who interpret the raw data. Though he has not read the book in detail, he initially seems to be drawn to doorstep drama. Marega Palser, who was part of the original artist-led research behind Finding Maindee through Mr & Mrs Clark, put forward some ideas for interpreting the data - potentially recreating the doorstep scenes. David Farnsworth commented again that art often starts as something which has no value - and we can partly assume he means here financial value. However, he explained that art appreciates as time goes on. In this respect we see that the Nonsensus arrived on our mental desktops this evening as a dense book of disparate data; the ongoing task is to interpret it and take it further...

There was a question from Tom who wanted to discuss trust. He shared his view that the people who gather the data are also people. He felt that many surveys are designed to change things; and that people know that they are potentially giving power to others when they answer questions. There is a suspicion and fear of consultation exercices.

Though the latter point about trust takes us away from the art, people obviously did trust Stuart as the artist on the edge of the fourth wall. And he got results through this commitment to the task...


Something about commitment to the job


As members of the audience put forward their views on consultation and data collection work we collectively started to touch on experiences that many people hate doing - namely to force other people to give their time and energy to something which they don’t want to. Cold calling.


Stuart explained that he never wanted the Nonsensus fun factor to dip below 9 out of 10. This was a laudable aim considering that he was going door-to-door trying to interview actual people. Having spent some time with Stuart - and hearing his response to questioning at the Q&A - there has been a real energy [or to use his word buoyancy] to this work. And perhaps the choice of ties helped to keep things light? Stuart did find things hard and he reflects on the organisational challenge of conducting the Nonsensus in this blog post from 9th February. And then there is the beautifully designed book with every word faithfully printed. You sense that few people would have taken on such a huge task. 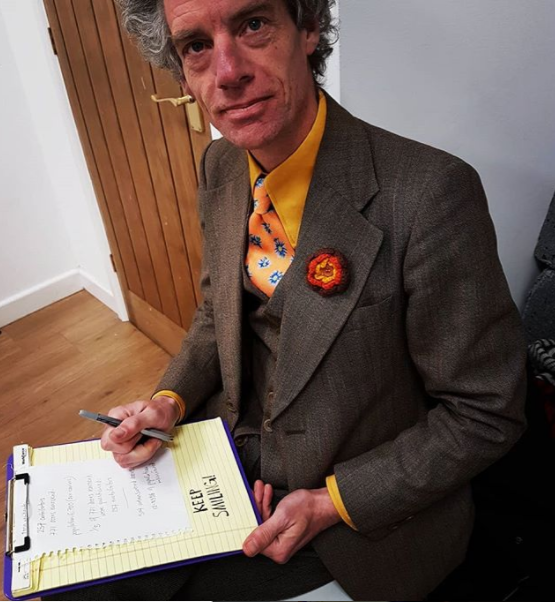 Fez explained that many people use the term ‘hard to reach’, when referring to certain groups of people. Fez invited us to really consider whether anybody should be hard to reach - or whether there is something more to the type of questions that get asked and whether people want to answer them… A later point from the audience about the ‘consultation’ interview helped us to explore the sense that those asking the questions are the ones with the power and those answering the questions are the ones who have the power to ask. What does this mean…?


Are people hard to reach? And what about this word engagement?


Jo Sutton made a point about the role of the Nonsensus as a chance to engage with people. Jo is a trustee of Maindee Unlimited and had been part of the decision to support this project. By engagement she means going out and talking to people; finding out who they are.

Stuart told us that the Nonsensus used English as the medium to communicate, but how about about connecting with the Asian population? Fez Miah had much to tell the audience about the importance of faith and Stuart told us that there were loads of responses to do with God. Many other people asked questions about what to do with this form of engagement; for example will there be more than copies of the book in Maindee Library to represent findings from the Nonsensus?

Although the following was not discussed at the Q&A, it is worth explaining that not responding to the official Census is a criminal act. The following article in the Guardian explains that 120 people were prosecuted for not taking part in the 2011 census. And that one company was paid £150m for their work - within an overall budget of nearly £500m.

But what do Office for National statistics from 2011 really tell us anyway? The survey is done every decade and there is no real underlying narrative, such as Dino advocated earlier on. Instead it is more of series of data which allows this place called the Victoria Ward - that most people cannot identify anyway - to be compared to some other place in the UK. The Census data sits on some websites for public access, but more importantly it informs a massive number of policies and practice across all levels of government and public life.

Could Stuart do better than the official Census and revisit people and present the results of the Nonsensus? Without considering the work of doing the surveys themselves, the book alone cost £10 to design and print so distributing to 2,000 households is going to be at least £20,000. Instead it is worth exploring the response that artist Steven George Jones advocated: to develop the ideas that Marega and Dino explored on the evening. Maybe everyone can help to take on this further work and encourage people to come to Maindee Library or public space to find out more and take part? Maybe the Nonsensus can go on tour to other towns and cities?


Three things that learned on the evening

John Hallam suggested that we bring all of the work together in the Finding Maindee evaluation day on July 14th. Perhaps on this day we could also invite the Arts Council of Wales and the evaluators to meet the real people who took part in this exercise?