Last week we selected the joint practice of George Lovesmith and Sarah Hollingworth to work with us on the project to develop the fabric of Maindee library building on Chepstow Road. We have put a lot of thought into the process; all the time questioning ourselves who this project is designed to support and why. This quote from George and Sarah helps understand the approach that we can expect in the period of working together which will last until spring 2018:


"This brief brought together long-standing shared interests in the co-production of whatever can be called public - an approach that aims to collectively build capacities, ownership & better buildings. Our strategy is three-fold: playful provocation, physical enabling, and an invite to collaborate."


This blog article will give a little background on the process we made for this appointment; and sets a baseline for how we hope that regular communication will lead to a successful project.

Taking advice ahead of the Creative Practitioner (CP) appointment


The library is the biggest single project in the Finding Maindee programme. The majority of the funding for this investment of circa £200k has been provided by the Ideas: People: Places (IPP) programme supported by the Arts Council of Wales, with some funding also coming from the Newport Council-run Landfill Tax Credit Fund and the Wales Churches Act Fund.


We were fortunate that many of the other IPP projects have already started on their big projects and so we were able to learn from their practice. For example, we realised that Maindee Unlimited, as a small charity, did not have a reputation or networks to give us the best chance to find a practice who could respond to our demanding brief! Consequently we took advice from Confluence in Haverfordwest and worked with Sarah Pace at Addo to help us scrutinise the brief and circulate the opportunity to a very wide field.


Using an open brief through Addo


The brief was developed through a session held in early February and refined to the point where it was published online in March. The brief included the exact details regarding fees, budgets, expectations as well as uncertainties. Over nearly two months Sarah handled many enquiries from practices not only in Wales, but also across England and some international practices. When questions came through via Sarah we were able to think a bit harder about what the project was really about and what skills and capabilities we had to bring to the project also. A re-assertion of the project purpose was published as a blog post in April for example.


We reached the deadline at midnight on Sunday 23 April. It was impossible to really know what sort of response we would have rom the client side; we knew that some mysterious people had wondered into the library [asking questions] and so guessed that there had been maybe 5 or 10 people that were interested. In the end an email arrived from Sarah in early May with a spreadsheet attached and containing the names of nearly 30 practices. Sarah had put all of the submissions into different folders and it all felt very organised.


The shortlisting session happened on Tuesday 2 May; a week before the interviews were due to take place. The panel included library volunteers Kim and Maggie [also a trustee of Maindee Unlimited]; Ruth from the Arts Council of Wales with John, Aled and Fez as the staff of Maindee Unlimited. Sarah and Tracey from Addo had made an initial assessment of all the submissions and so we were given the task of reducing the number down to a maximum of 5.


Considering our own governance model


Maindee Unlimited is a very small organisation with two part-time staff, one voluntary programme manager and volunteers both in the library and on the board of trustees. We have never taken on implementing such a big project before. Given our circumstance we took some time at the short-listing to confirm the purpose of the CP role: that is to say looking to find a practice that could help us where we really don’t have the skills; working on buildings and the intersection between art and architecture.


We had a discussion about who the CP will take guidance from in project management terms; that’s to say what is the governance model? Aled suggested that through this process we would form a governance model by learning and doing. John has an oft-used phrase that Maindee Unlimited and the library are an ‘anarchist cell.’ Although John explained that though he had taken on a lot of personal responsibility in forming this organisation and movement, this is the time to pass responsibilities on to others. There are some nuts and bolts elements to the project that most would agree need to be sorted out, such as heating and how the roof is configured… The artistic side would always be exploratory. For both sides a CP would need to help us do this. 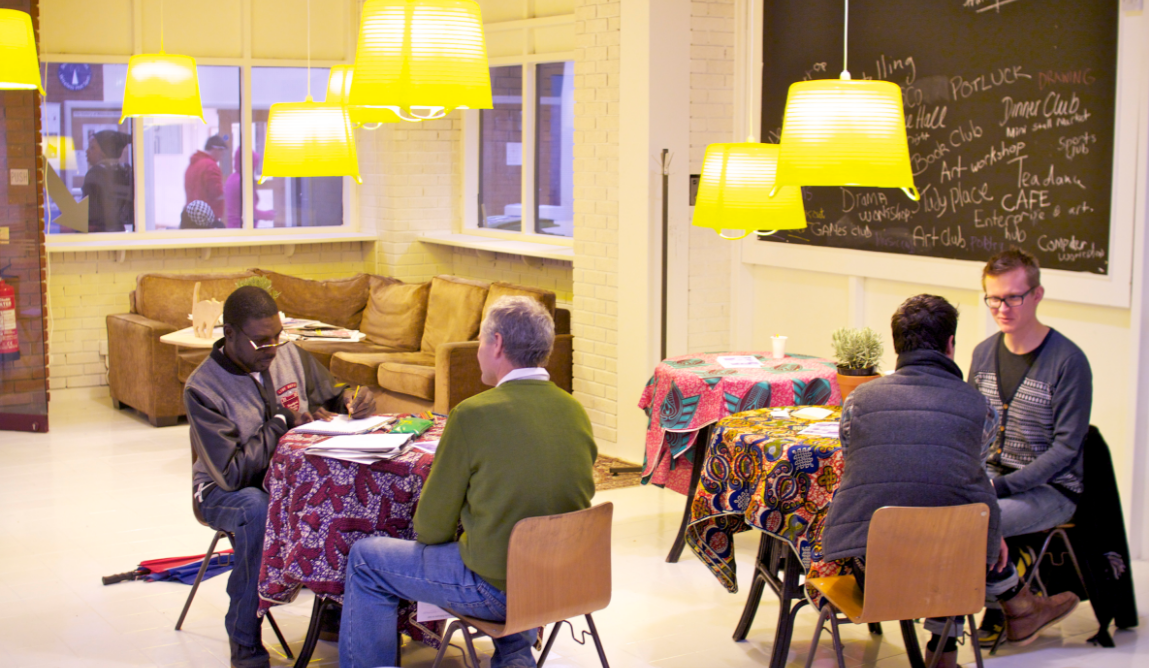 Image above - Willesden Green Library which Sarah and George worked on

Connecting to the previous stand it was clear from some of the CP proposals would offer some ‘off the shelf’ items, such as sourcing the blinds which are clearly required in the library, whereas others would prefer to focus on bespoke systems and products. This exemplifies the split between the artistic and the functional: developing the specification for a bespoke item versus taking charge of making sure that the job gets done properly for more functional items. Without doubt, MU and the library will need to develop a system of governance for this project.


The previous work to submit the CAT2 application [and the plan for implementation which we did not get a chance to follow though] had very much been done using a PRINCE2 model. This was driven largely by the demands of the Big Lottery Fund as prospective funders. However, the project on our hands right now has a very clear arts element to it so we would need to think in a slightly more fluid way. We also reasoned that a good CP would be very open in terms of offering their own experience of other projects and client teams that they had worked for. Ruth explained that the CP should be able to scrutinise the client; essentially they have more experience of doing such projects [than Maindee Unlimited] so have already done a lot of learning.


This is the story of finding Maindee and how we learn about ourselves [see April blog article] so it is not fair to report on the pros and cons of each CP submission - or indeed add any specific detail. We short-listed 4 different CP and asked them to prepare a presentation. Sarah communicated with the CPs that were short-listed and produced the necessary documentation for us as panel members on the day.


The interviews took place at Maindee Library on Thursday 9 May 2017. Nathalie from ACW replaced Ruth on the interview panel. Each candidate was first shown around the building and then given up to 20 minutes to present their approach to the commission. The panel asked 6 questions after this: first how they understood the local cultures of Maindee; second about communicating throughout the project; third about socially-engaged arts; fourth about risks; fifth about accessibility & engagement and finally about the practicalities of running the project. The interview concluded with an opportunity to ask the panel questions.


The decision we took


The interview process was very competitive and we had a hard choice to make. The presentation by the winning CP, George and Sarah, is here for download and for people to view and consider. 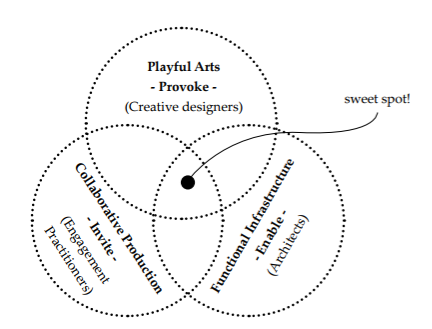 We particularly liked the way that the approach led on finding the ‘sweet spot’ [above] between the three parts of functional infrastructure, playfulness and collaboration. We could say that our ‘Finding Maindee’ programme to date had included the playful - such as ‘Inviting the Neighbours’ or ‘Theatre for Change’ - and the collaborative - ‘such as Mosaic Maindee and Maindee Stories’, but without the right CP we don’t have the skills to make the links to infrastructure. The track record of Sarah and George, which you can see on the submission, prove that they can operate in the worlds of both architecture and the arts. We also liked the idea of ‘early wins’ or small initiatives that could start as prototypes and then lead to completed products. Building on this idea, we sensed that there would be an opportunity through George and Sarah to break the tasks down into smaller items and for there to be a number of people who could act as ‘project managers’; a way for library volunteers to gain experience and make their own mark on the building. As such, this submission responded very much to particular case that we have in Maindee and the skills and aspirations that we have. The ‘anarchist cell’ would have a chance to develop...


Sarah and George came to the New Paths gathering on Thursday 11 May - for which we have a blog article. At the gathering they had the chance to meet some of the people involved and to get a better understanding of the people and the project. They hope to spend more time in Maindee over the coming months learning how Library Plus works, perhaps sometimes working alongside us in the space.

George has links teaching in the architecture schools in Bristol, Bath & Cardiff. He's passionate about integrating practice with learning opportunities for anyone who may be involved, so there may also be projects as part of the appointment in collaboration with these student communities.


In the coming weeks we are responding to the questions that we have asked ourselves above governance and project manangement. Maindee Unlimited will setup a project management board. The board will be chaired by Dave Moses, the chair of trustees for Maindee Unlimited, with Aled as the project manager. Though the detail will evolve over the coming weeks we will most likely split the work into stands, including linking with the library & volunteers; considering operational systems that support the library; the CP's domain of architecture & design and the crucial task of communications & outward media. The project board will first meet towards the end of June 2017 and will oversee the project until it completes in the spring of 2018.


We are very pleased to make this appointment. We thank Sarah Pace at Addo for doing a fine job and to Ruth and Nathalie from ACW for supporting us thus far. The biggest thanks goes to the library volunteers who have helped keep this building going for over 18 months now. Without you this opportunity would not exist.


We look forward to keeping you updated on the process and developments.

Presentation by George and Sarah is here for download