Following the first gathering in January we decided to repeat the format: get a group together in the library and give a few of them the chance to go in front to present their projects and seek advice and collaboration from others in the room. This time the order on the bill was Jo Haycock, Ismael Velasco and Lloyd Gittins; and Jo even came to us with a set of prepared questions for the group! 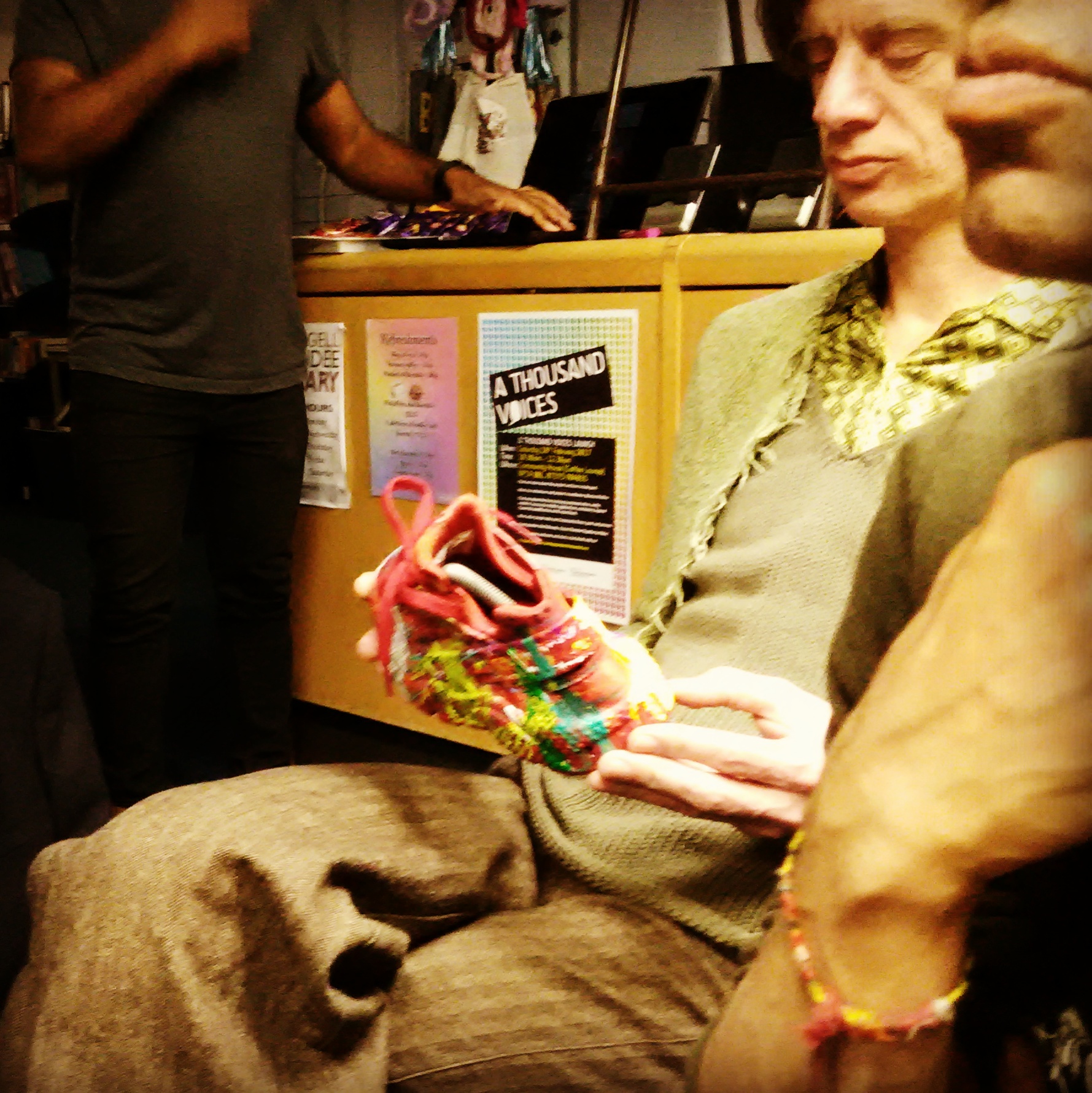 This is what happened at the gathering, with some links to the different projects and an invite to the third event, which will take place at 5pm on Wednesday 15th March.

Jo came to us with a New Paths proposal last year which would use photography to explore the idea of ‘houses for sale in Maindee’ and therefore get an idea of where the place is/has been geographically. She would spend time with the estate agent Leonard D Morgan and use photography to interpret the knowledge of Maindee held within the walls of their Chepstow Road office and the memories of its principal Ian Morgan. 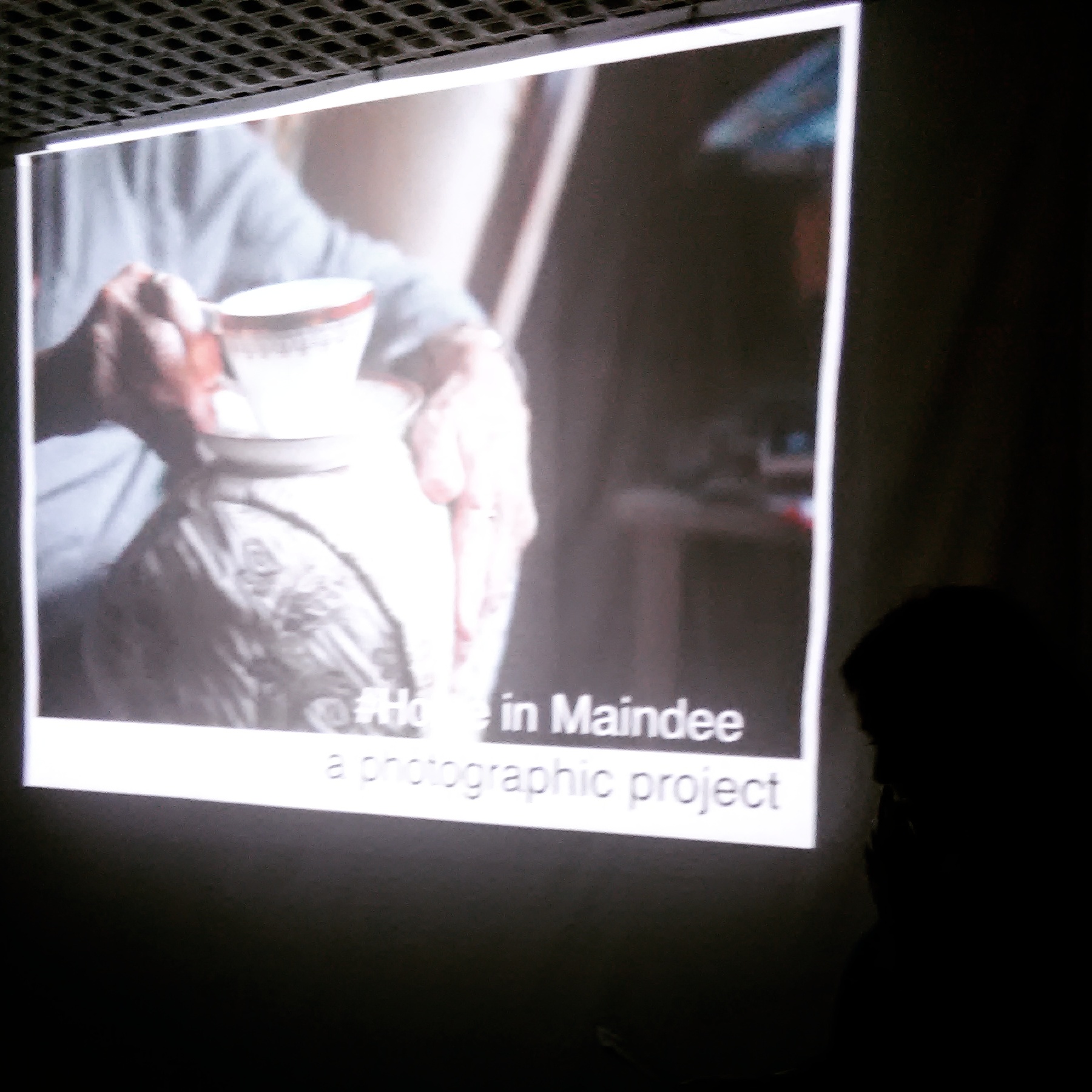 Jo gave some details of her adventure and told us pretty quickly that this approach had been harder to realise than had been expected. Trying to get time with the estate agent had proved difficult and Jo saw her time dribbling away as she waited for meetings to happen. The business had houses to sell after all...

After a few months she decided to take a different approach and spend time with people who had moved to Maindee. She found something perhaps more profound by taking this approach. Jo said of her change in focus that:

“I started with Maindee’s physical boundaries, but instead moved towards the emotional boundaries.”

After meeting a couple of people she got to meet some more and then noted that she built trust with the people whose houses she had visited. She said that this change of approach:

“I have come to trust the process; let things grow organically and in 8 months I have explored 5 homes.”

From all the people that she has met she found what she describes as an ‘unwavering loyalty’ to the area around Maindee. The idea of ‘selling’ therefore seemed less and less relevant as the people she met had a greater focus on their emotions connections to Maindee rather than houses for sale. It felt to Jo as if the project was more about ‘Home in Maindee’; the title which she put at the start of the presentation. 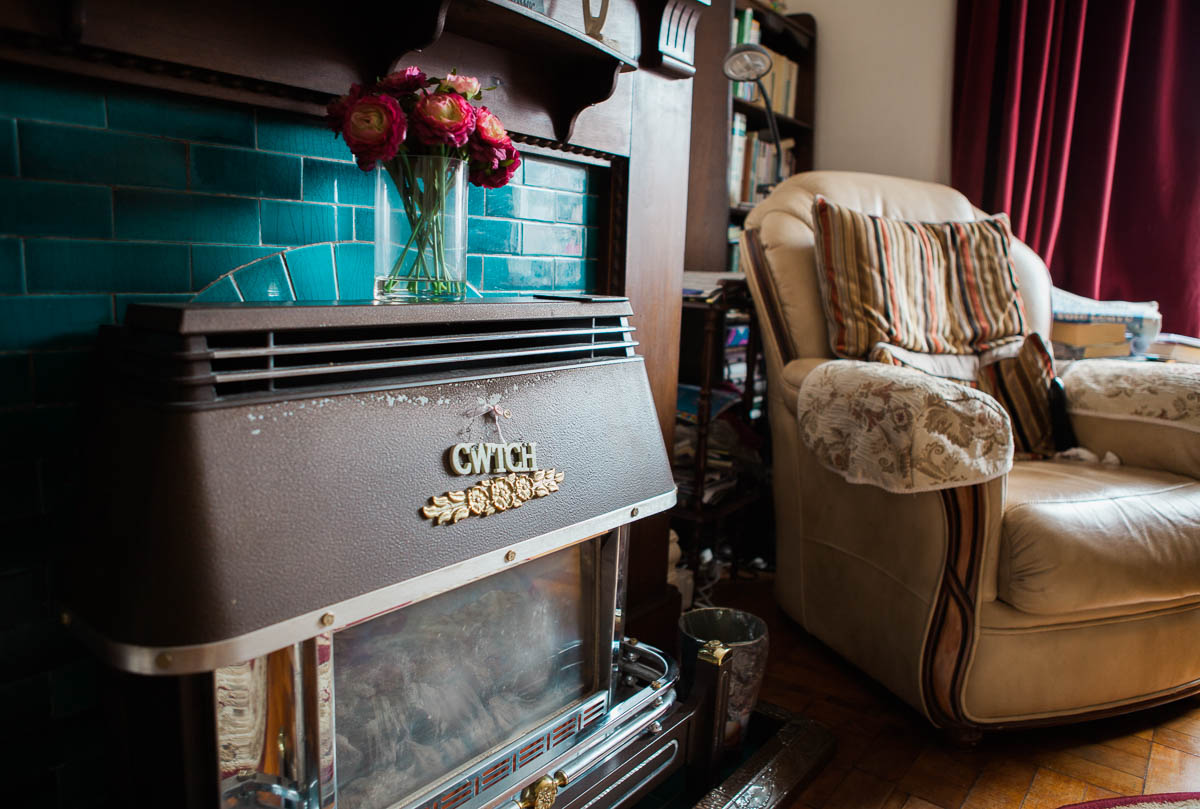 In many ways Jo was putting the emphasis back on the audience in the room - including Maindee Unlimited trustees and local resident artists to ask what they wanted from her now. Jo’s questions were as follows: (1) Is there a theme to the work? (2) How can I display the work? (3) When should the work end?

A discussion emerged from these questions and the responses are listed around what people said.

This seems to be the easiest question to answer. Most people seemed to agree that the idea of making a home in Maindee was a good theme – especially in terms of building the community.

Marion Cheung suggested that Jo could keep a regular blog for her work – something that she had done herself with her Maindee Stories project last year. Jo has some Maindee articles on her photography website, which is listed at the bottom of this blog, as well as Instagram page.

Ideally Jo is looking for some guidance on where the images can be displayed. At present we would like it to be the library, but we are still in the phase of planning how the space gets re-organised [see blog post from 5 February 2017]. Jo’s original idea was to put some boards up outside different houses – the same size as for sale boards – and this would still be a good thing to do.

Rhys Webber spoke from the perspective of running his design business – deadlines are critical. Maindee Unlimited trustee Jo Sutton asked if Jo Haycock was still collecting images; to which the latter said yes. Jo Haycock had recently been spending time at Friends hairdressers and was still determined not to give up on the estate agents. She said that she really enjoyed the engagement, but was not so good at setting a deadline for this project. She is clearly enjoying this project.

This last point about deadlines – and the scope of the project – was not really answered; and perhaps it will be through following the timescale of another project that Jo can find an end date. The following presenter / performer Ismael Velasco has a very tight programme for his ‘Theatre for Change’ work and perhaps the two could collaborate; this is what we learned from Ismael.

Ismael introduced his recently-started New Paths project as using theatre to ‘find the intersections between art and social change’. He performs a one-man play, featuring mime and short sounds, to explore a simple story of adversity. From the point where he has the attention of the audience, what he describes as ‘the best moment’, he then works with people to explore their own stories and generate conversations. 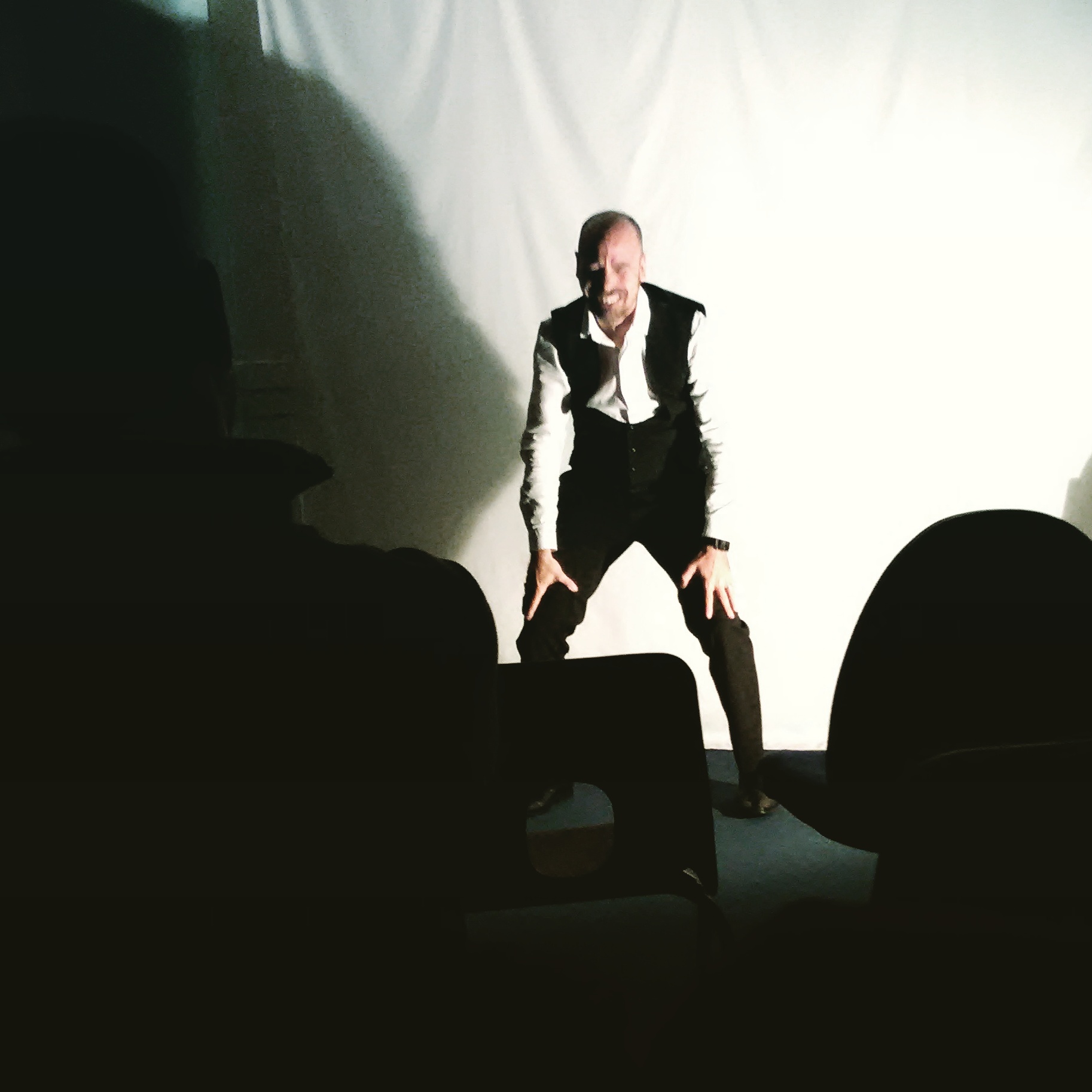 Having performed a shortened version of his play to us in Maindee Library he explained that the position of vulnerability of the audience is also a rare chance to generate trust, something he says is ‘weird, but kind of comprehensible’ but has worked before – such as with some Somali women in Bristol. For people who take part in the extended play he hopes that each will take a step of action to confront a challenge in their lives.

Why is Theatre for Change happening in Maindee?

Ismael’s larger plan, and the reason why we backed him through New Paths, is that he will be performing this play to many different audiences across the area. What is different to conventional theatre shows is that he directly asks people in the audience if they would like him to come to their community or space [it could be a front room, a shop or wherever] and explore the same experience. So far he has connected with youth groups and many others; he plans to bring all of these people together at the end of March to have one common experience. We have a blog post about how he has getting on – go here.

Ismael particularly wants to do this in Maindee as he has seen many micro-communities since moving here last year. The play can be performed in any space – and certainly works better with a strong light shining on him as the performer to accentuate the shadows. The film on our Facebook page – below – certainly accentuates the shapes that he makes through his mime.

There were some people in this audience who wanted to take up Ismael’s offer of a performance with their own communities – including one to help with resilience education for children. On an artistic level Jo Haycock explained that she had met Ismael through her photography work – and she hoped to collaborate further with him over the next couple of months. Many of the other questions from this particular audience reflected on how Ismael’s own story – particularly his faith – may have influenced the performance and the purpose of this project.

Ismael told us that he is a member of a faith community, the Bahá'í community of Newport, along with being a member of a cultural community, the Latin American community, and of professional community, the local artistic community.  In taking on this project he said that he has to be equally active in all these (and a few others) and hope to benefit the Maindee and beyond thereby. Like any artist, Ismael brings a large part of himself to this project. He describes how his background informs and influences this work:

What next in Theatre for Change?

It is worth watching the film to get a taste of the show and a chance to understand how Ismael talks and communicates with people. Like Jo Hayock before him, he is trusting that this process of connection and relationship-building will lead to something positive for Maindee. Like most of the projects we are pursuing there will be some action that will come.

Otherwise email him on ismael@adorafoundation.org

* Since this meeting we understand that Jo and Ismael are likely to be collaborating an event in Maindee to mark the BBC Get Creative Weekend on Friday April 7 to Sunday April 9.

Lloyd Gittins came to the library to explain how his Maindee-based _hp90customs work to customise trainers had turned from a hobby to a business with an Instagram page that now has 13,000 followers on Instagram. 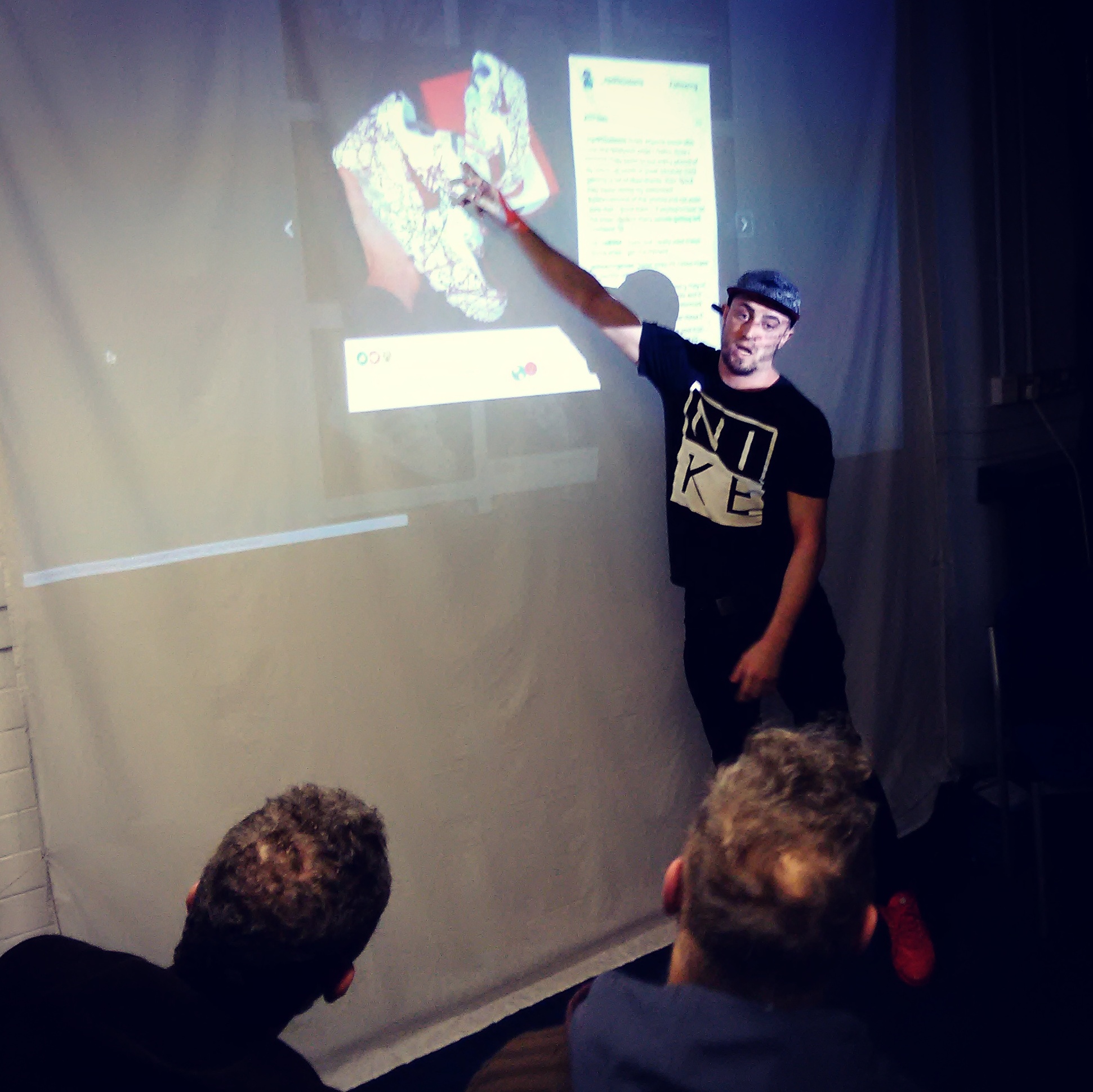 Similar to what Ismael explained beforehand, Lloyd's story is about confronting challenges in his life to find something positive. He described how the art of  painting the trainers had calmed him down and helped him to fight depression and other family challenges. Lloyd passed round one of the trainers that he had painted - pictured at the top of this blog post.

A lot of the questions from the audience centred on Lloyd's business model, such as keeping his overheads low or potentially taking his work outside the UK. Lloyd expained that he was starting to branch out into things like hats, straps and other leisurewear products. He said that:

There seem to be some options in Newport for Lloyd to have a presence - including the Market in centre of the city.

In terms of Maindee, Lloyd explained that he is not quite ready to help with the community, but that he would really like to when the time is right. Having said that, Fez explained that Lloyd will be working the library to make some items for sale like bookmarks or personalised pad locks. Dilip Sinha suggested that Lloyd's work could contribute to a market day in Maindee - should we repeat what was tried out in March 2016.

Ismael made a comment about how everything is about the audience - whether it is performing a play or selling products. He commended Lloyd for being honest about his story; he also hoped that the two could collaborate through 'Theatre for Change' and much more.

Similarly to Ismael, there were lots of people who wanted to collaborate with Lloyd - including designer Rhys Webber. We were really pleased that Lloyd could come along to meet us today and share his experience. It did feel uplifting that artistic activities can have such powerful influences on people's lives.

Ismael's progress so far on this blog

The BBC Get Creative Weekend April 7 to9