In mid December 2017 we went up to the Kickplate Project’s 76m2 exhibition space in Pontypool to have a chat with Dafydd Williams. Dafydd spent a week in October as an artist in residence in Maindee - taking portraits next to the toilets at the Triangle on Livingstone Place. 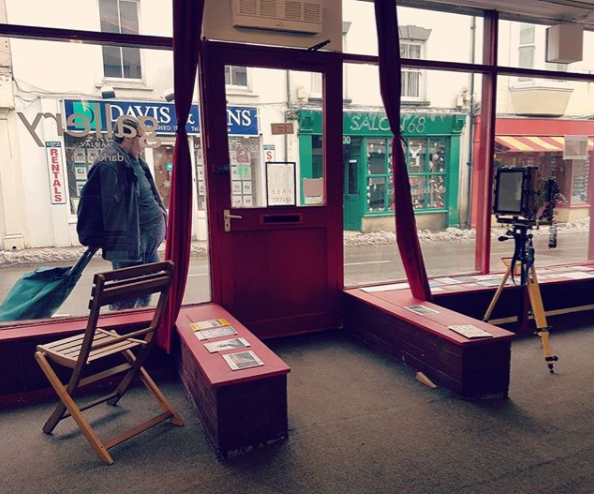 This blog article recalls how art projects help us sense whether towns and settlements of all sizes have a centre - or not. What are the conditions that change relationships with places? How does Maindee in Newport compare to industrial valleys towns like Pontypool and Abertillery where populations have more than halved in 100 years.


We also also talked about Warsaw in Poland, where the majority of the city had been destroyed in WWII. What happens when people have to think again about what they want from their town or city. Above all we confirmed in our minds that arts activities help to bring people together and help us make conversation.


Dafydd originally came to Maindee with his partner Zosia to take part in a New Paths gathering in July 201. Dafydd then pitched an idea to Fez about a camera obscura - which would make portraits of people using the most rudimentary photographic methods. The trustees were happy to award Dafydd a New Paths grant for the work to happen.


Dafydd set up his camera obscura in the autumn school half term week which followed the Newport Photomarathon in late October 2017. We wrote about some of the initial responses to his work in our blog [3rd Nov 2017]. Through this follow-up conversation we really started to understand what happened.


We learned from Dafydd that the week had started slowly, but had became very busy during the last three days. It seems that people were fascinated by how their image ended up appearing on a piece of paper. The process involved a man who was first inside a toilet cubicle switching lights on off, he then emerged and washed the paper with mysterious substances and swilled it around in a tray. Each image would take some time to dry out.


The experience was made extra special as most people weren't sure what to expect: the light faded quite quickly in the afternoon and so the chemicals also cooled down. And so the images varied in quality; from the very vivid and clear to the washed out and ethereal. People were perhaps able to sense from this experience that modern digital image-making is so perfect.We asked if the camera obscura had become something of a spectacle at Livingstone Place. Although he said that he had been very occupied with all the different processes, Dafydd sensed that people watched others: it felt like space was being used and that it was particularly good for children who were off school on their half term holidays.

Finding the centre of places


In previous blog article we looked at the history of the site on Livingstone Place; such as the old image of the formal fountain and the well-dressed people with coats and hats sat on the benches. As we reflect on the experience of October 2017, we ask how the sense of acceptable behaviour had changed over forty years. With less attention given to maintenance from Council - such as the toilets being closed and no seating - then who sets the rules? Does the site now have a reputation towards being a free for all? Or a space of opportunity?Having spent a week there, Dayfdd felt that houses on one side of the Triangle are important to the dynamic. We wondered whether this piece of land could ever be the centre of Maindee… In fact where is the centre of Maindee? Could it be the site [below] where the Christmas lights were organised by Jony Easterby on the Hot Rocks bar?

Sitting in Kickplate's rented exhibition space on Commercial Street on Pontypool - and watching people trudge through the ice and snow - we could get a sense of Pontypool. Dafydd explained that the latest Kickplate project had welcomed many people to the 76m2 space. As we spoke some of them came into the shop that day to pick up their portraits.


Dafydd comes from Abertillery in the valley to the west of Pontypool. The former town on the Ebbw Fach is now home to 11,000 people, but in the mid nineteenth century it was a much bigger place than Newport. The population peaked at around 40,000, but there has been a rather massive population decrease in the last century.


It is also worth reflecting that the growth in such places was even quicker than the decline and that there was an unevenness in these developments. For example the impressive Pontypool Park only exists today because it was previously a large private garden which later became a public park. What this suggests is a historical lack of thoughtful urban planning and so that public spaces were not given a lot of consideration.


To build a community people have to speak to each other. Today very few cases remain where hundreds or thousands of people work together in one place - such as the heritage of mining, steel and factories. Dafydd said that valleys people still speak to each other all the time, such as on the bus. However, the industrial towns of south Wales never had the outdoor space such as cattle or outdoor provisions markets that existed in market towns like Abergavenny.


The Victorian historical connection helps us come back to Livingstone Place and how we are now seeing it as a triangle. There are two long sides and one short end at Number 88 Chepstow Road. One of the long sides has always been a busy main road [with public transport connections, Maindee Police Station and Maindee Library] and the other one has always had a row of terraced residential properties facing it.


Dafydd explained that he noticed people chatting whilst he made the photographs last October on Livingstone Place. His art project was perhaps an initial excuse for people to speak to each other: finding a thing in common. Our design team from KHBT considered how architecture facilitates space for conversation. For example, the playful elements of their plans help to create something of a street garden for Livingstone Place residents.


Sensing that Maindee has urban opportunities

About an hour into our mid-December conversation it was clear that we had moved on from art to history, to urban politics and then on to geography. Whilst only the higher parts of Newport had any snow on the ground that winter day, Pontypool had at least 30cm of snow on the hills. It made reminded us that the valleys locations which the Kickplate Project focuses on [see July blog] are essentially rural locations, but with post-industrial urban lifestyles and urban expectations.


But is Newport different to this? There is clear investment in rail infrastructure with electric trains about to connect us to London and Cardiff. And if you take the motorway east then it is impossible not to notice the building work around the conference centre at the Celtic Manor. Also a trip around Newport on the M4 reveals why many people want a better version of this road. Maindee is within touching distance of opportunity.


Dafydd explained that Maindee seems to have some special qualities and the feeling of a ‘micro town’: something he could see in the way that people interact and seem to know each other. He recalled asking people where they are you from: Maindee or Newport? Some will say the former rather than the latter.


As a commentary we are glad of the artistic approach that Finding Maindee allows: sensing how and why people connect with each other. As an example Dafydd gave Made in Roath - to the north of the centre of Cardiff - as a case where the transient student population, the well-off middle class residents and Asian families get to talk to each. Social space is created for the time of the festival.


Is there now an opportunity to create centres for places?


As with much of the Ideas: People: Places work, we are always amazed at the perspective that artists have of place and urban dynamics.


Dafydd explained some of the work going on through Rural Development programmes in south Wales valleys counties like Caerphilly and Blaenau Gwent. Ideas are emerging for places to have things like electric car charging points. There is a sense that people want to find ways of keeping life within these social and commercial centres.Dafydd also compared south Wales to a little town of 40,000 near Warsaw, in Poland, that he often visits with his partner Zosia. He explained this letter place only has a few shops and that people go to the city of Warsaw as the place to socialise and go out. Going back to history, 80% of Warsaw was destroyed during World War II. Newer developments were created as dormitory towns and people find community some distance away within the city centre. The expectations are different.Taking another example from a continental European city, Dafydd explained that all space is public space in Naples [southern Italy] and that the newest of them dates back to the nineteenth century. Referring to this mediterranean city Dafydd recalled how day time activities leads to the evening time. The colder climate in the UK is definitely a factor in us not having so many evening outdoor activities. But then again, we do have the library as a rich indoor space… 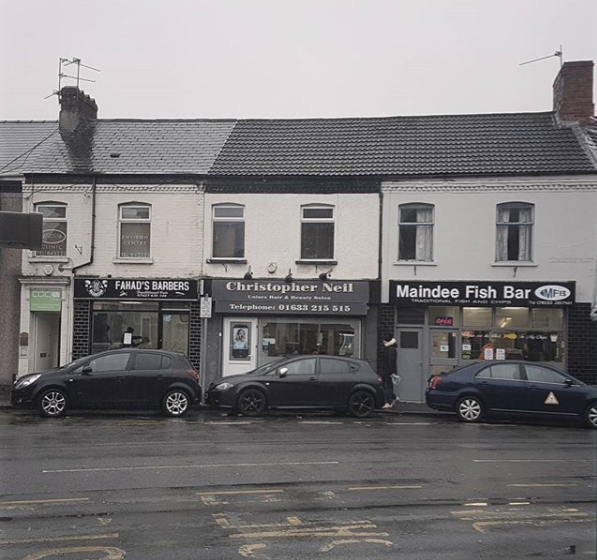 At the Triangle we do have a living public space with three businesses right next to it [see above] and the library opposite. The bus stop allows people to travel direct to Cardiff, many parts of Newport and even Chepstow. We can continue to use community knowledge and some financial resources from the Finding Maindee project to create something positive for the future. And we may even find a way to keep some public toilet provision.

In conclusion, we are at a complicated stage with the Triangle: financial pressures are forcing the local authority to pull out from this public space and the social function [such as the toilets] that it has long provided. However, we have had a rich diversity of perspectives and views on what can happen here: from residents from, Dafydd Williams' work, from the neighbours who painted there in October 2016 and more.

The Made in Roath festival