Progress for Refresh at Maindee Library

Over the past couple of months So Exclusive Developments have taken charge of the library building and made some big improvements and changes. Their focus has been on the small spaces which support the functionality of the library; the main changes to the main reading room will involve library volunteers, artists and makers and will start again in June 2018. 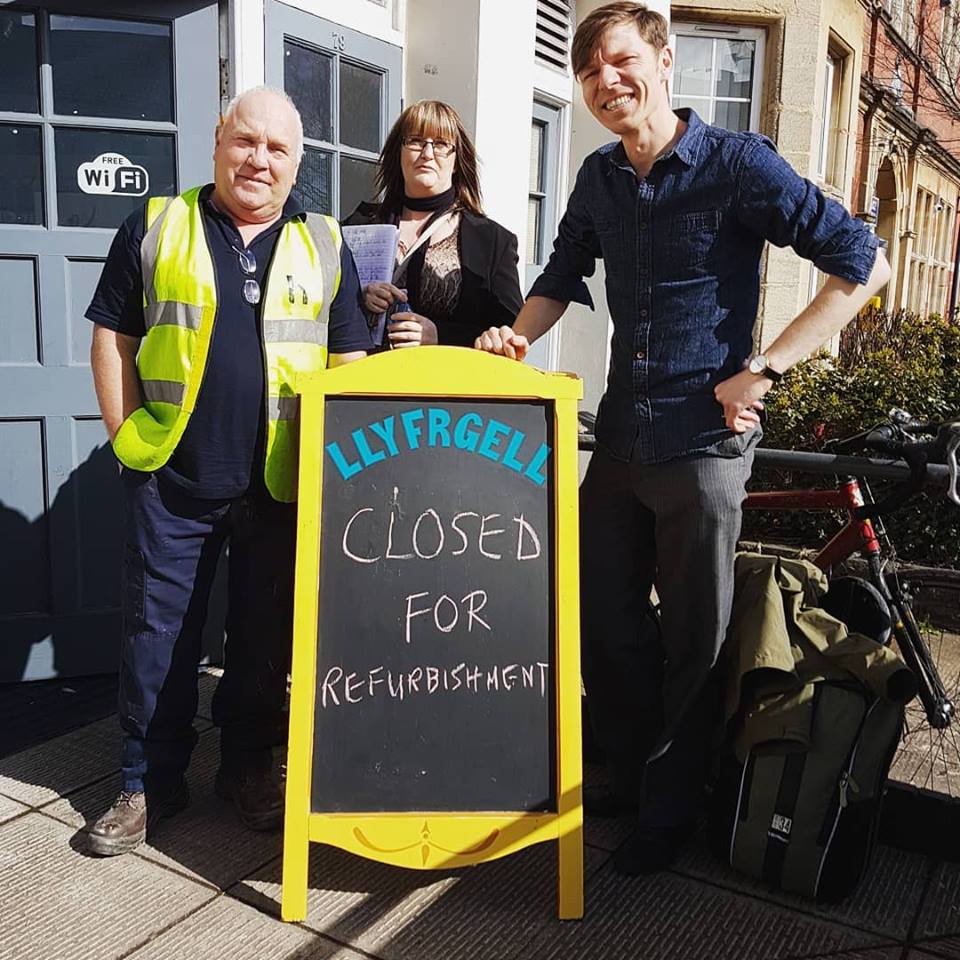 So Exclusive have now nearly finished all the work to construct and fit out the new meeting room [where the old toilet and kitchen used to be]; they have created a new kitchen space [where the old meeting room was] and made two new toilets in the space between kitchen and meeting room. To service the whole building the electrical systems have been updated, the boiler has been replaced, new radiators installed throughout and the main room has been insulated ready for the colder months.


This blog article provides some photos of the work carried out and also gives a taster of what will happen during the summer months as we go back into the building.

Contract with So Exclusive

So Exclusive Developments have developed a reputation for breathing new life into existing buildings. Last year they worked on The Pod, on the east side of the Usk by Newport Bridge, and this year won the tender to implement the architectural plans designed with library volunteers and made by George Lovesmith and Sarah Hollingworth. So Exclusive started the contract in early March 2018.


One of the main tasks was to re-configure the meeting room, toilets and kitchen. As can be seen in the image below, the toilets are built from a wooden frame. As time has gone on, the frame has now been insulated, had plaster board attached and all the necessary fittings such as doors and other carpentry. 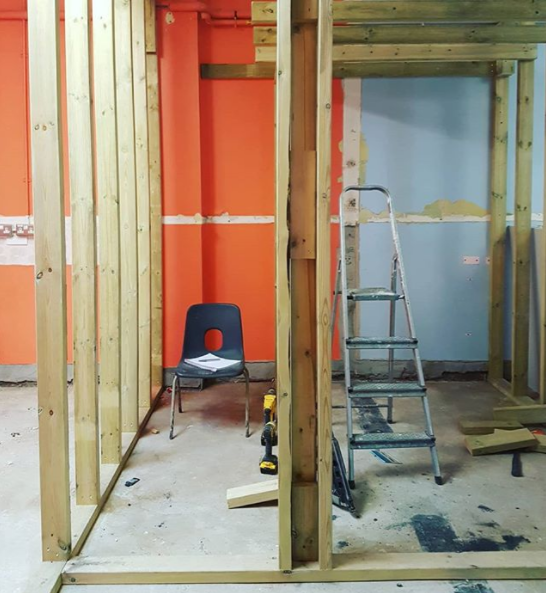 The biggest change to the small spaces was the creation of the meeting room. As can be seen in the image below, the wall between the old kitchen and the boiler room and the toilet had to be knocked down. The roof is now held up with a steel beam. We have now lost the quirky old colour scheme of blue and orange! 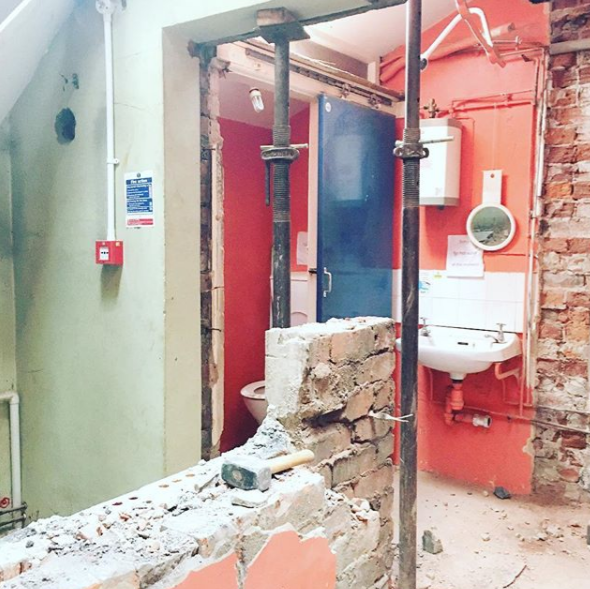 After knocking down walls the meeting room started to emerge at the start of April. Below you can see some of the Maindee Unlimited Management Board standing behind a carpenter’s table.


Note that the old rooflights have been replaced. For a room with no windows at eye level, we are really pleased that there is a lot of natural light and happy also that this offers a lot of privacy for meetings. The room will have a full A/V setup with a screen, fast broadband connection and much more. 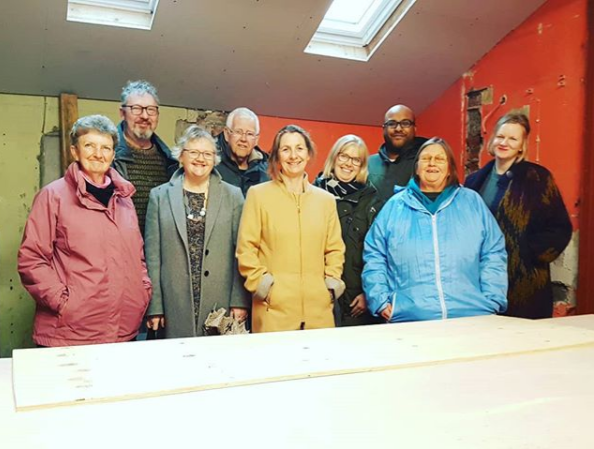 There has been a lot of other work to update the systems in the library. We hope that people will like the retro-style radiators that have been installed throughout the building by Dave and Ed [pictured below] from Hollis Plumbing & Gas. To make things easier for library volunteers to operate the building the boiler now fits in a cupboard instead of taking up a whole room! 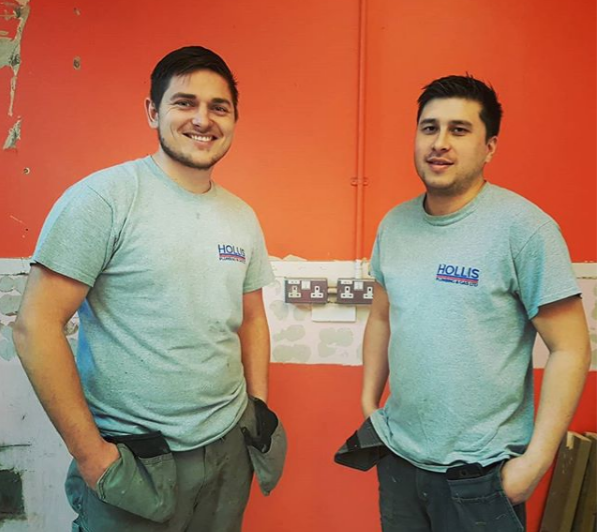 It has been good to learn from the different trades who are working on the building. For example, there are lots of copper pipes in the main room and Dickson from Smart Sector [pictured below] has been using his special machine to bend metal tubing and make the ducting for the electrics. Artist Stephanie Roberts hope to use some of these materials and techniques for her residency in June. 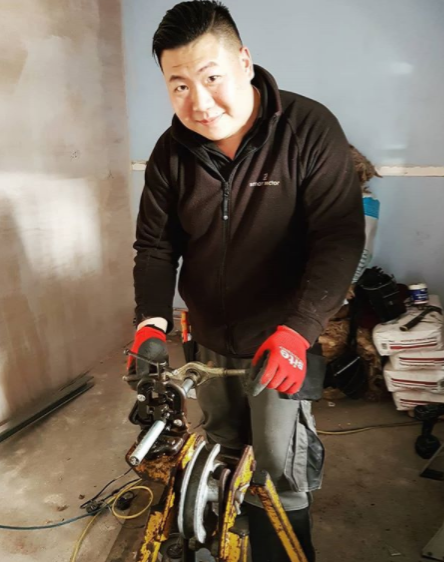 
We called our project a refresh because we wanted to gradually develop the building rather than getting rid of everything and starting again. We were also never lucky enough to have a particularly large budget. As a result we have invested in the process of design and thought carefully about where we can reuse existing items, such as hanging the existing doors in new locations - pictured below - and repainting them. 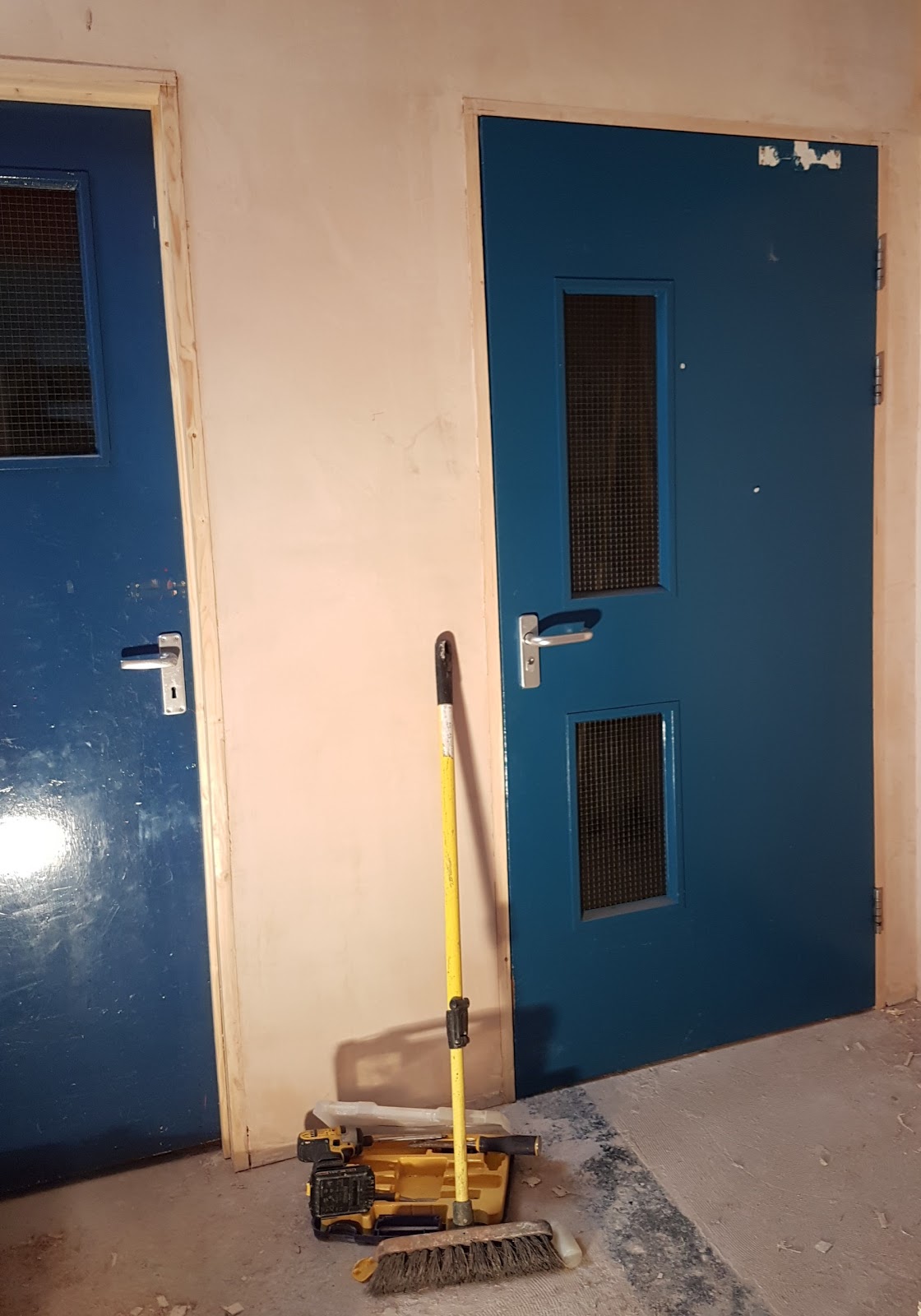 When we get the get building back from So Exclusive we will work to add the details that make the space special. For example our plans include an art residency with Steph Roberts, a crafting project to modify the library shelves and the replacement of the rooflight and all the windows. These feartures are explained in the following paragraphs.


On Wednesday 13 June artist Stephanie Roberts will return to the library and start on an art residency which includes Saturday sessions and lasts through to the end of  the month. Stephanie wants to add small and simple, but important, details to the building  - for example around the space below the roof light in the image below. 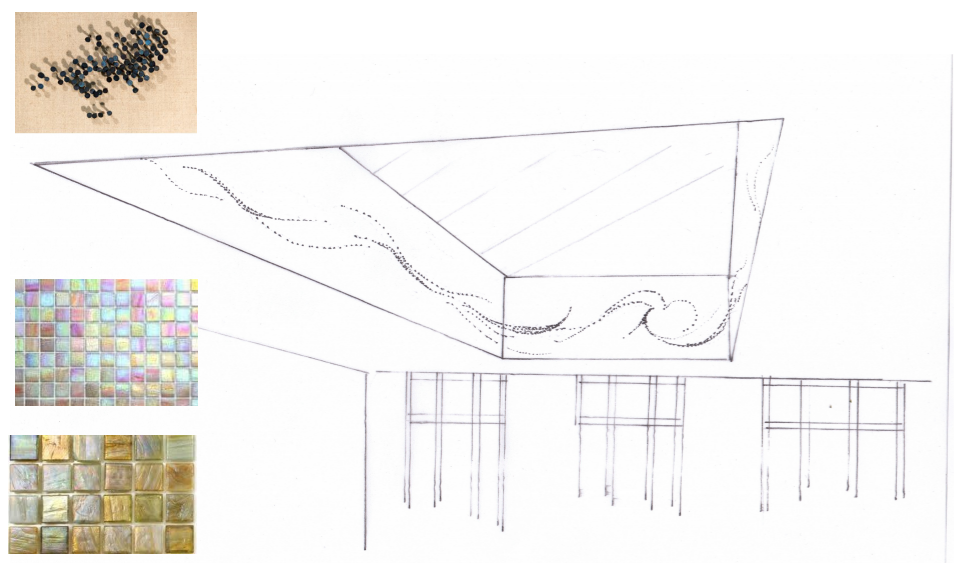 Stephanie has done a lot of work with Maindee Library in the past couple of years; her philosophy is to be very inclusive and so this is a chance for people to really dress the library with found objects, fabric as well as mosaic including ceramic and glass.


There is also a chance to be inspired by some of the techniques used by Dickson and the plumbers; such as bending metal and making some pieces out of copper piping. In the end Stephanie has a range of ideas, such as the surround below the rooflight, but is open minded and the residency will be shaped by the people who come along during the project.


Between Friday 20 April and Friday 4 May a group of Cardiff architecture students worked with us to consider how to modify the library shelves - see their design document here and image below. 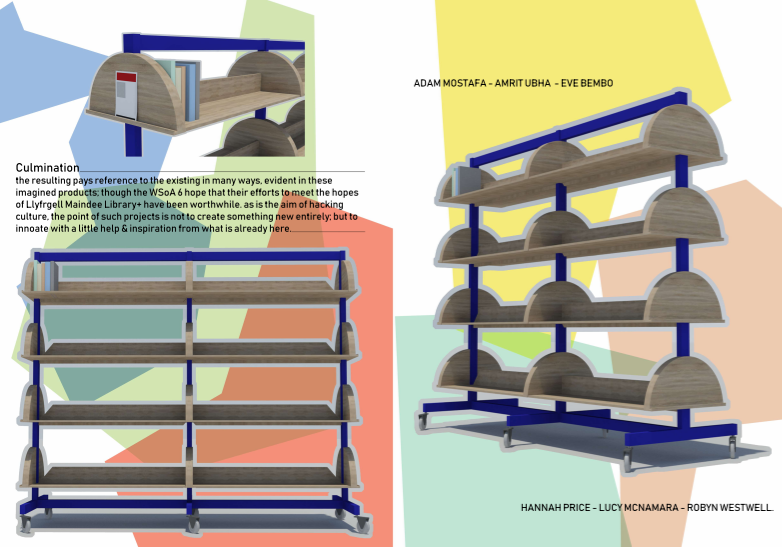 A lot of people contributed to the project and there is a lot of positivity about hacking the good bits of an existing system to create a bespoke product for Maindee Library. We have now asked David Henshall to develop these designs into something which can be made. We hope to get this work going towards the end of May and into June. The project will also feature at an architecture conference at Cardiff University at the end of June.


The biggest change to the main reading room will be the replacement of the windows to the front and rear; and also a new roof light in the ceiling.


We made a planning application in April 2018 for a new design to replace the old wooden-framed windows with double glazed aluminium-framed units. The new design - seen below from the yard behind Maindee Police Station - will provide a system with windows that are easy for anybody to use. Furthermore, the rear door will be wider than the existing one and so provide a better fire escape route also. We expect the windows and rooflight to be installed sometime after the middle of June. 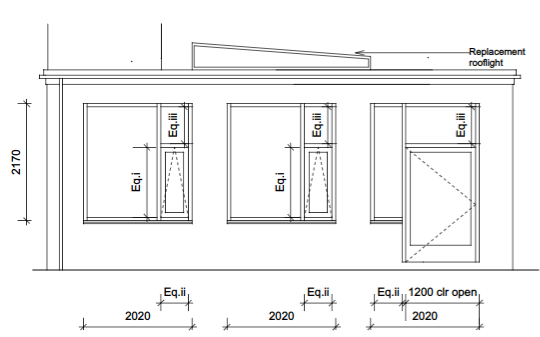 There is more to come in the following weeks and months.