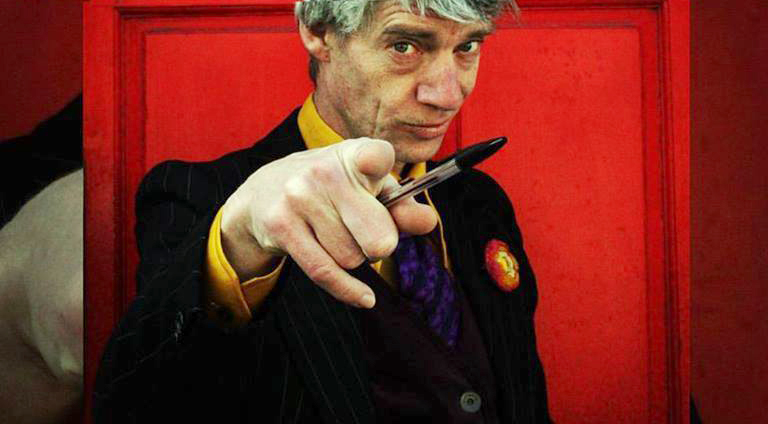 I AM STUART FARNSWORTH AND I DEMAND ANSWERS

I am Stuart Farnsworth. Fact. This is my second visit to Newport. Fact. Two facts equals data. Fact. Despite rumours and persistent suggestion, I have never worked for the Office for National Statistics (ONS). This is fact but also fake news, possibly even an alternative truth and I'm all for alternative truth. Honestly.

I first came to Newport, in real terms, in 2012 at the behest of Steven George Jones, Newport's principal avoidant artist. Back then I was trading by the name Errant Saunter, a casual observer drafted in to imagine, also in real terms, a fictitious version of Jones' hometown. It was during this engagement that I encountered the neighbourhood of Maindee and now, following an absence of five years, I am back. In real terms.

As a freelance fact-finding facilitator (FFFF), I have been conducting a door-to-door Nonsensus, forwarding a trilogy of open-ended questions to the residents of Maindee's Victoria Ward. As these doorstep encounters unfold, I have been privileged to witness instances of soul searching, rumination and reflection as subjects consider my three simple questions.

Over the ensuing weeks, on this small slither of the internet, it will be my pleasure to share my experiences, thoughts and methods as I delve into the depths of Maindee to unearth hidden truths, trawling streets of terraces in search of answers and through the alchemy and wonder of observation, turning FAQs into facts.

I began my engagement on the 22nd of May, a day some regard as my birthday. It was Jones' suggestion that I begin the Nonsensus at the foot of Victoria Avenue, where he's had a bicycle accident aged eleven, ending up hospitalised after vaulting the entire length of a Ford Capri idling at the lights. He lied about the commemorative plaque I would find there.

The avenue was festooned with placards of political support as the general election loomed. Jessica Morden's presence in the front gardens of Victoria Avenue was clearly the more visible. I knocked the first door of my own campaign and was rewarded with a lengthy encounter with a 68 year old retired carpenter concerned with tin gods and the lack of opportunities available to "young people, like yourself". I declined to inform him that I'd turned 48 that very morning and instead took his poor observation as unwitting compliment. Ceramic tiles marked the number of his house. He'd bought them in Greece.

A little further up the avenue's mild gradient and another lengthy doorstep exchange and another garrulous retiree. One of the few houses on this stretch touting Tory support, the gentleman nonetheless offered an account of his support for Arthur Scargill when he ran for Newport East in 1997. He also provided a concise education, with an obsessive attention to detail I quietly envied, about the Standard Motor Company.

The day's most poignant interaction was with an elderly lady who revealed she was close to dying of cancer. When asked how she would fix the world, she replied "I don't know love, cos I'm not interested anymore". Although the exchange was fleeting and perhaps a little terse, I find that her despondency resonates still.

Of course, not everyone is quite in the mood for Farnsworth's discreet enquiry but even in these instances the offerings for casual observation are rich. The man with missing front teeth and a large plaster on his forehead, a front garden lined with Astroturf, the lady and her daughter delicately attending to an injured fledgling on their front path, the heavily tattooed man who answered the door in just his underpants. Sometimes life is just too good.

It took a little under four hours to knock one hundred doors and my technical support team calculate that to cover the estimated 2,000 homes within Victoria Ward will take 80 hours. The march of a thousand miles ...