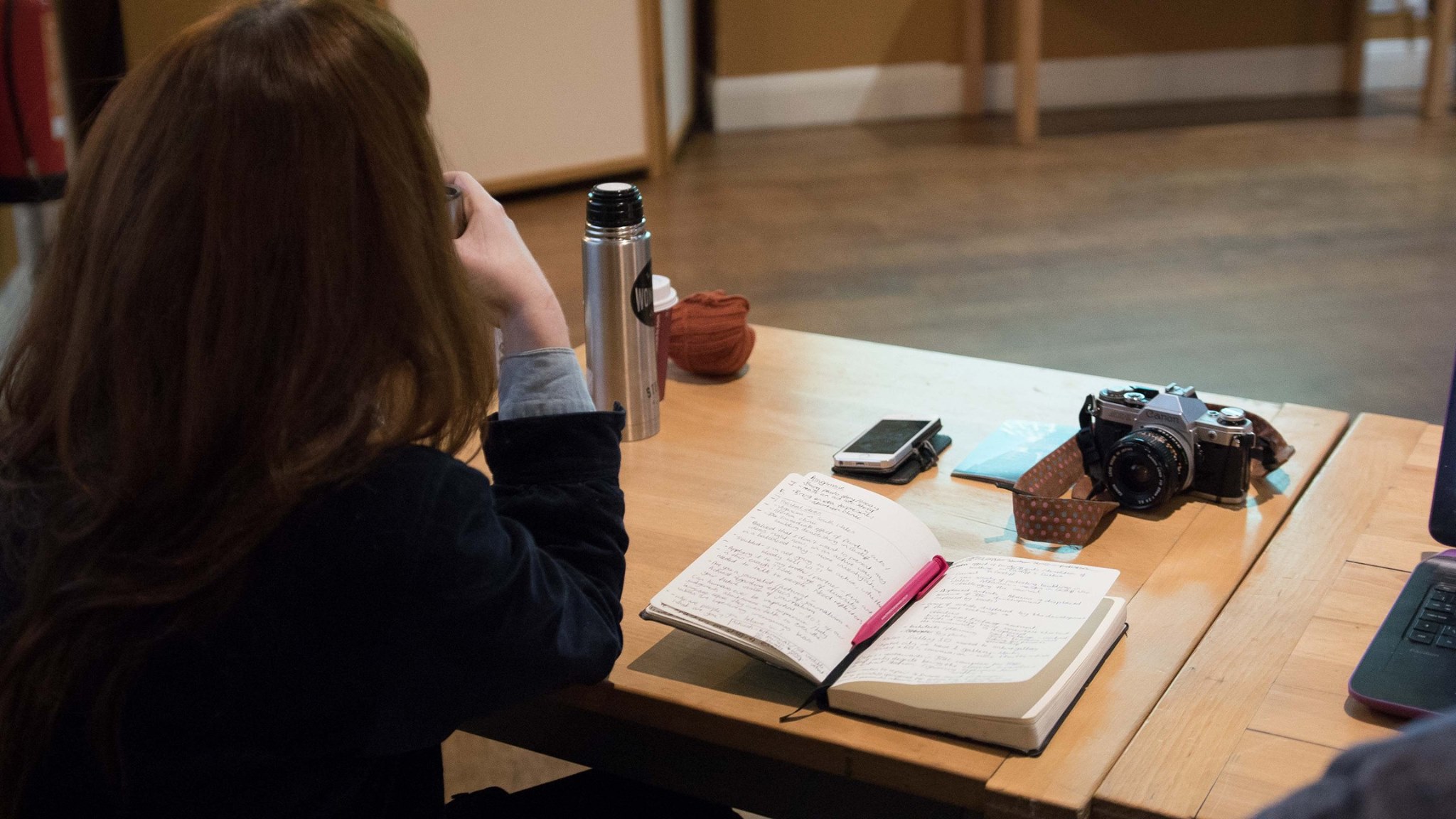 “Vedat Xhymshiti delivery was very articulate and engaging. His background  of  photo Journalism has taken him  to many war-torn areas around the  world.  Let’s face  it - his job is not something for the fainthearted. His background  immediately became apparent. This was one hell of a serious  workshop." - Dilip Sinah, workshop attendee.


Whether we like to admit it or not, in the world we all inhabit, we all live in complex and nuanced information bubbles: based on whom we choose to listen to, speak with and read. A bubble that can, at times, seem predetermined. Some of us look in astonishment as to how Trump or Brexit happen, why racism still exists, or why Honey G was ever popular! That's because we were in an information bubble - a bubble where opposing views were not observed and the bubble has formed our perspective and framed our "reality". It’s argued that this bubble has occurred due to the sheer unfathomable quantity of information that we receive on a daily basis throughout our interconnected lives. Creating a bubble allows us to manage the flow of the information we are constantly bombarded with.

The flow of information is also managed by outside parties such as Facebook's algorithms, which carefully deliver to you the type of information that they think you might prefer to read or listen to based on what you ‘like’ or share. These echo chambers inadvertently (in)form our opinions and perspectives, creating a cyclical process of input informing output – your views are the product of what you consume, and what you consume is a product/result/reflection of your views. This can be damaging; especially when you consider how this impacts fair and balanced representation and the integration of community groups, broader community development and social issues. As this balance is thrown further off-centre the further polarisation we witness in diverse and developing communities such as in the UK. 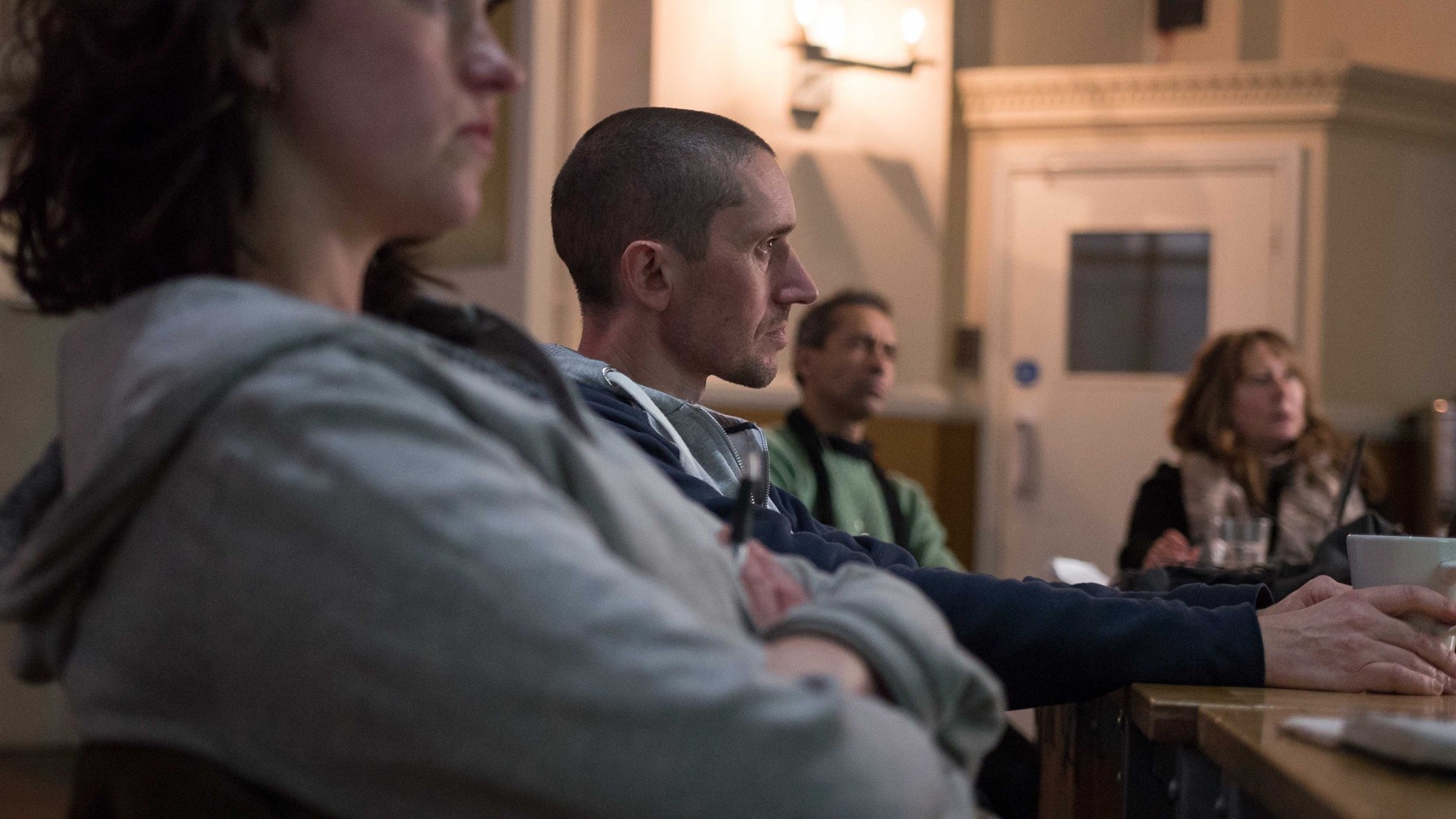 This blog post will explore what I mean by these statements and how photography plays a vital role in either breaking down the notion that we live in compartmentalised spaces of information. Or how it can perpetuate and become complicit in building stereotypes and further marginalising groups? Our bubbles are built by ingrained cultural bias, privileged, ethnocentric perspectives and learning. They are strengthened and reinforced by advertisers and private entities trying to repurpose and manage their audiences and by policy makers that choose to manage a rapidly changing arena in competition for your attention. What does it take to step out of the bubble and learn to become pathetic to others perspectives?


In developing a public-facing local arts funding programme which is warm to diverse spaces and faces, a workshop was introduced to explore how photography is an essential tool in overlooking these bubbles. But also as one that can be harnessed to make proactive change and challenge perspectives and in doing so help us peer into the bubbles of others. We must develop a balanced perspective. This is more difficult than expected as we learnt through the workshop. Lens-based mediums are machines of empathy which are powerful in creating collective action. However the investigative approach opens up why and how to use the medium to hold people to account. This was one of the main reasons why the New Paths panel decided to support this workshop. Devolving power and encouraging citizens to become active participants is key in community and arts-led regeneration.


“Investigative research was one of the topics we covered in depth. The emphasis here was in getting all the evidential facts from reliable sources,  not omitting any  information that could potentially leave the final report vulnerable to challenges from those who are opposed to the changes you wish to bring about. An ethical code of practice, perseverance (it may take a year to gather this evidence) and integrity along with the correct communication of this evidence is paramount " - Dilip Sinha workshop attendee. 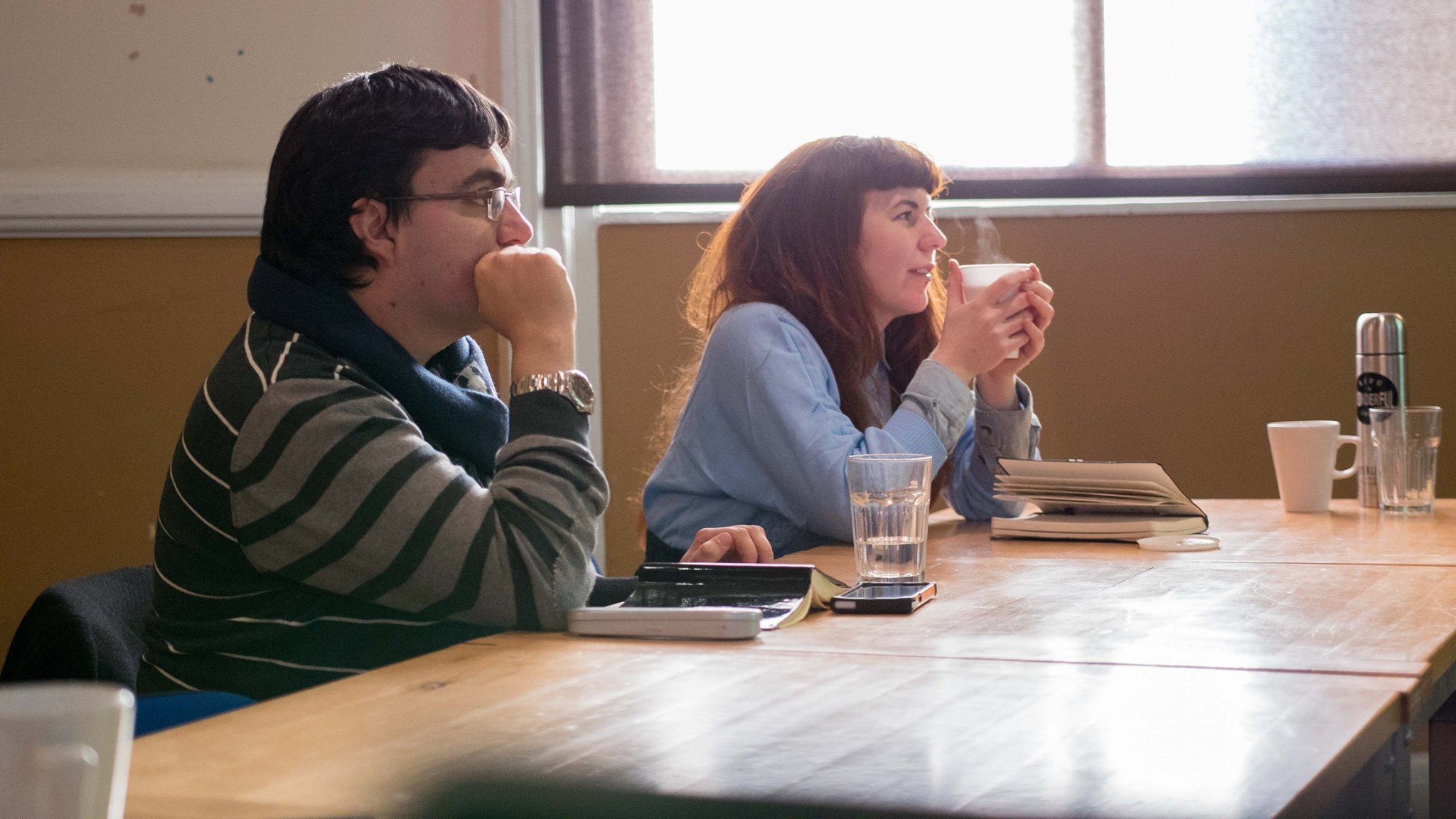 
On the rainy weekend of 21st of January, the New Paths Programme encouraged a Maindee resident,

Vedat Xhymshiti, also know as Vudi, has had a plethora of work and experience from working with European newspapers, to explore his skills and experiences of being a photojournalist and campaigner, and to encourage him to share them with a group of Welsh citizens. Vudis’ workshop was attended by communications officers from Kaleidoscope, artists from Tactile Bosh, and graduate photographers as well as active socially concerned citizens from South Wales.

These are some of Dilip's words after attending the workshop:

“We all returned the next morning, an air of seriousness and intent filled the presentation room. Most of us used images and ideas from current, ongoing projects we were undergoing for our presentations. The topics of the presentations ranged from the mass trapping and shooting of migratory birds in Malta, a radical programme being set up by the drug counseling service Kaleidoscope, to homelessness, loneliness and age concern.

Discussions were based around our presentations, which became the templates for analytical discussion, based around any existing faults within them.  Vedat discovered many potholes and flaws within our submissions and it is here he enforced the practice and values we were taught the previous day. Vedat’s  method of delivery was harsh, direct and intense. Attempts to defend ourselves were shot down by the head master.  Disagreement and debate ensued with full and equal participation from  everyone”


To explore the importance of photography in activism we have to understand the historic nature of the medium. I would like to reference Newport South Wales. It is a city of image making. Arguably some of the most prominent British photographers have come from, been to, or at least heard of the photographic work from this small, industrious and developing city for 100 years. Yes, you read that correctly… The photography programme which was later developed by the renowned Magnum photographer David Hurn.  What started in the city centre and then moved to Caerleon today it resides in the country's capital of Cardiff. Lens-based media in Newport has developed almost 4 generations of photographers who have collectively become contemporary practitioners in many different ways and have traversed the country and globe to set up a multitude of projects: sharing stories and opportunities across the world.

The skills learnt from the New Paths programme have transferred to new communication skills as well as developed newer programmes from fashion and advertising to photographic art and photojournalism. What is fascinating for us here in Maindee is that the photogrpahic education in Newport has also trained one of our trustees (Joanne Sutton). It has encouraged and employed me to develop the Street Media programme where I mentor a small group of young people from the Maindee area, as well as teach at both the University of South Wales and Univeristy of Gloucester. Two of the New Paths awardees are also graduates of the programme. What’s also interesting is that a Newport graduate Clementine Scheindermann is in a fellow IPP project is also a graduate! Newport’s connection to photography is truly embedded. Is this a USP of Newport that we should celebrate or nurture within the visual arts, or has the transfer of the programme to Cardiff ended this, and new paths should be created?

Is this a USP of Newport that we should celebrate or nurture within the visual arts, or has the transfer of the programme to Cardiff ended this, and new paths should be created? 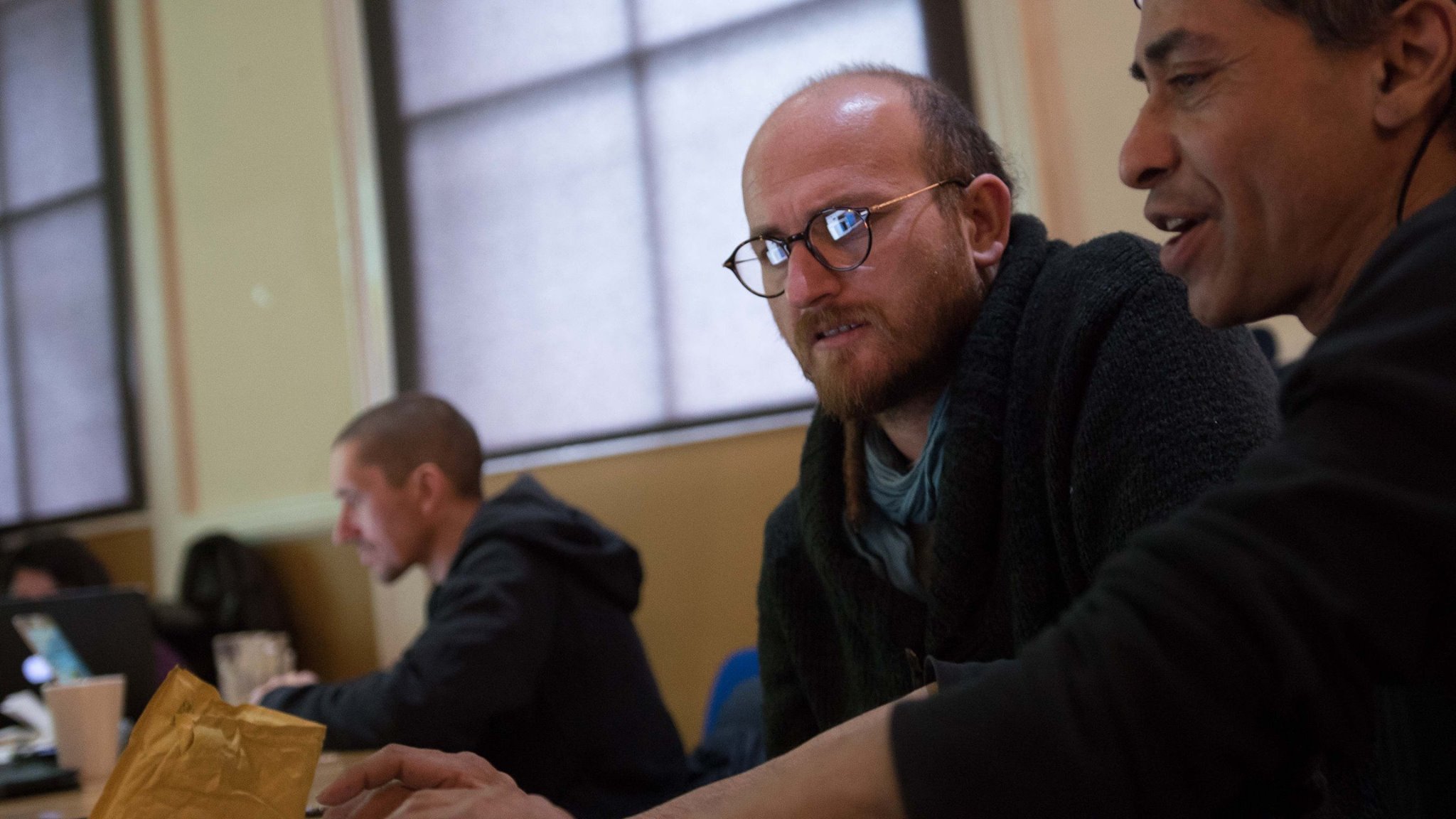 “Losing credibility through inaccurate or incomplete research may lead ultimately to losing the battle to make the change you had hoped to achieve in your campaign. These were some of the ethos’ that was hammered into us, ironically in an almost military manner. Constantly pacing to and fro, in front and behind of us, with his intense lecturing, simultaneously hammering in the points he wanted to convey with no mercy. Emphasis on the terms:  photo story/photo essay/journalism/ and photo activism and the distinction between these, became an issue, which some of us had disagreements towards.

Vedat’s views on these terms did not allow any blurring of their  boundaries amid our difference of opinion. With a black and white agenda of  a presentation the next day, Saturday evening was not  going to be a late  one. A scheduled start at 9 o’clock on Sunday morning! We were  due to kick off straight away with the framework of our  photographic based  presentations.  A challenging, if not a bit of an ambitious task, to undertake in  such a short period of time. The pressure was on! " Dilip Sinha


As the modern technological developments have changed news gathering and activism, so globalism has affected a lot of people. It’s something we are still exploring today and it became a little debate for the workshop. Another of Newport’s historic narratives has been activism. Its working classes are been bound in many formats over the years. From our Chartists, to the very formation of its third sector organisations such as Maindee Festival, activism and collective action have been used to make sure the voices of the unheard are loud and stay relevant in an ever more globalised, noisy and information-lead world. The need for collective action has developed with the onset of a connected communities . Some may have noticed the nature of polarised opinions over the digital airwaves, as well as social movements, gaining traction fast with the use of petitions and mobilised individuals.

It’s only recently that we saw the Chartist wall being demolished and world leaders descend on Newport for the NATO summit. Large protests have been a milestone for Newport and its development, and eventual heritage. This is a movement that I for one am proud to be a part of.  The new mediums have agitated established outlets and both the establishments and corporate have developed with the onset of digital production and internet distribution. This workshop was an exploration of the skills of a photographer whom has trained in Paris, travelled the globe on multiple assignments and has ended up in the tiny city of Newport.

Major points of the workshop were: Are the topics we cover as activists debatable? Can we bring all perspectives into the story or only shed light on one? Are their consequential actions that need to be covered?


It was the questions above that helped the attendees to be very self-critical of how they used photography to highlight social issues, and to become effective in their activism. This relentless nature of remaining unbiased and observant of the situations and making sure all sides of the topic were covered became an awakening for all that attended.


We would like to begin exploration on the idea of a photo marathon this summer. It will be a chance for people to develop photography around some creative guidelines but ultimately not be too concerned with format or hardware. During the New Paths programme we are constantly learning of the power and importance of the visual arts and believe they should not be underestimated.  More information will be coming soon... 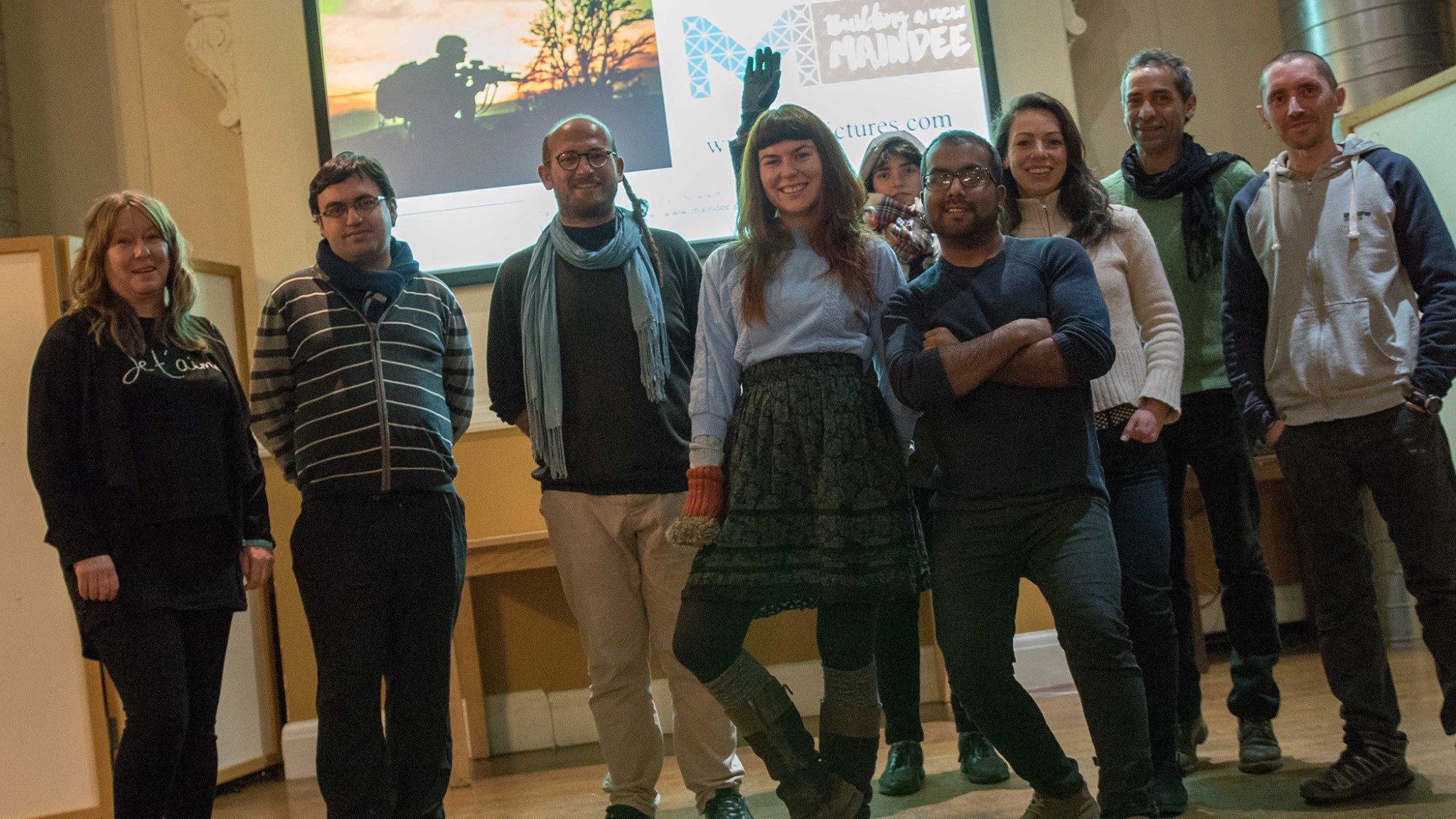 Jo Haycock project: Reportage of families that have settled here in Maindee.