The November New Paths session explored creativity and asked about ways of making money. The main focus for the session was the presentation delivered by the student group making the mobile cafe, with updates on Cinema Speaks from Bernie and Fez giving us some background on how the Newport Photomarathon been shaped and delivered. 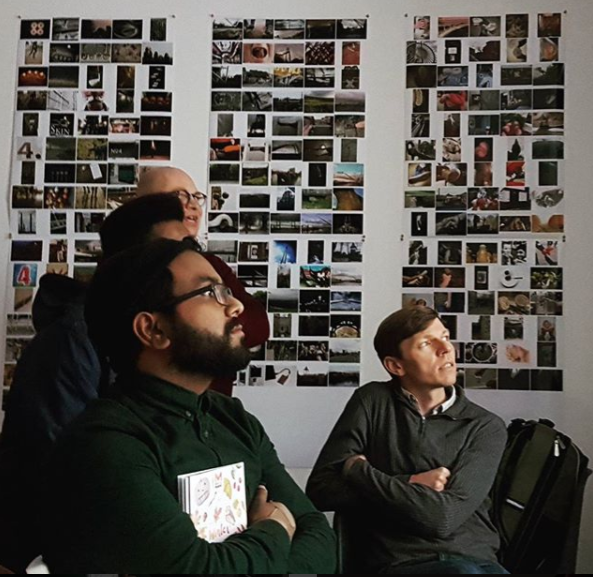 We also moved the session from the library over the road to Holbrook Studio, which was the HQ for the Newport Photomarathon and also the venue for a new creative business that Fez is developing.


Bernie introduced his Cinema Speaks work as a combination of a film showing with the chance for the attendees to have a conversation afterwards. Bernie explained that there had been 10 film showings to far - which started by showing films in a living room and had since visited Horton’s Cafe before setting on Maindee Library. The largest number at any one session had been 15 people.


Bernie had previously programmed films at University, but had always wanted to add the conversation afterwards. Since moving to Maindee in the past year Bernie told us that he has found a place which “has a community”; one which he describes as having a “living conversation.” The films so far include topics such as forgiveness and justice. 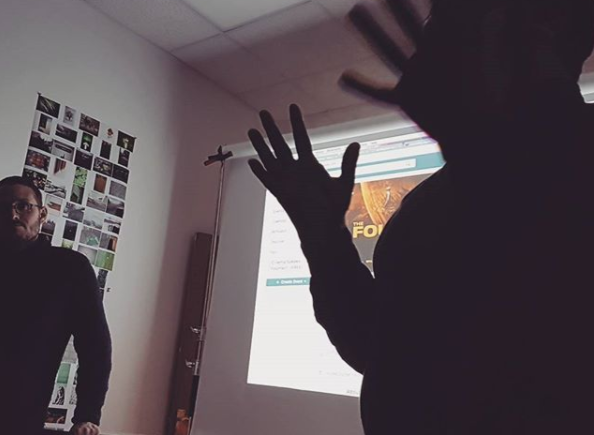 At present Cinema Speaks works on people spending very little money - Fez added that film clubs rarely make much cash. In response Bernie [above left] explained that Cinema Speaks is more about the purpose of getting people together to share ideas and reflections rather than the aesthetics of the film itself.


We passed from Bernie’s unscripted talk, which had been a last-minute replacement for a cancellation, to a very polished and slick presentation about the mobile cafe from the group of student architects.


The group of Matt, Verity and Brad presented a good report on the work with us in Maindee since the start of October; including local market research and the learning from the Library Soup event at the end of October when they gave us their full-size model of the mobile cafe. 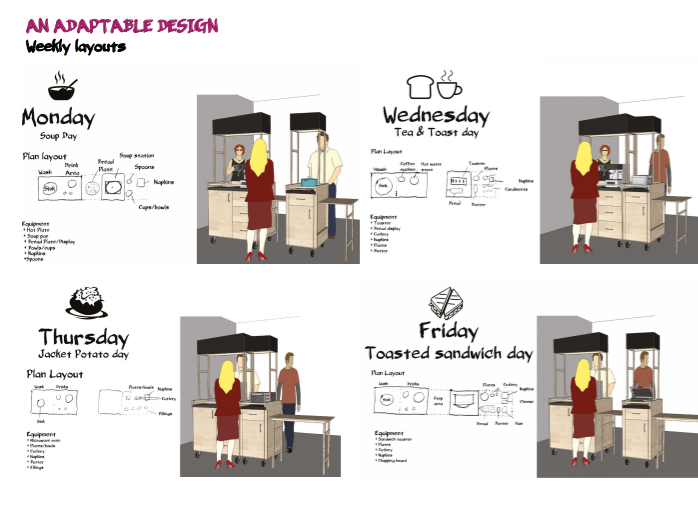 Brad started off the talk with an introduction to the scope for the cafe offer, such as catering for different days of the week [see image above] and also for outdoor events away from the library. It was clear that Brad and the others had spoken to the relevant people at the Council’s environmental health team. For example to understand requirements for washing hands. The design now incorporates a small sink with access to a water supply. Prompted by a question from Sally, a tutor at UWE, we learned that a health and safety handover manual will be prepared for the unit.


In terms of what the student design team had gained from meeting the community at the library, Verity told us that the October 28th soup event had allowed them to sense which design changes were required. For example, they realised that the counter was too small and that they would therefore need something which folded out. Verity explained that experience of taking the mobile cafe outside to the front of the library resulted in larger wheels being chosen for the final version. She also explained that there would be a lip on the counter to stop large items falling off. 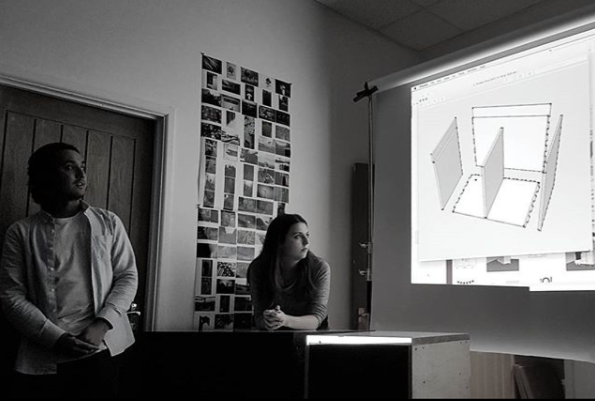 Related to taking the unit outside, Matt [pictued above left] presented some 3D models this time and showed us how the mobile cafe will be accessible and meet Part M of the building regulations. The 3D designs show real attention to detail and good use of the CNC [computer numerical control] machine which cuts the wooden sheets to form the mobile cafe. David Henshall had presented a smaller CNC machine to our September New Paths session; as an experienced product designer he asked the group what they had learned from the project so far.

It seemed that the student group had never previously gained such practical experience of testing their designs. Being able to do the market research was also beneficial - and potentially useful for future use of the mobile cafe. The group had been given the task of managing a budget. They did very well with the resources available, by getting a free worktop from Cymru Kitchens - just off Caerleon Road - and also some materials from Maindee Handyman. 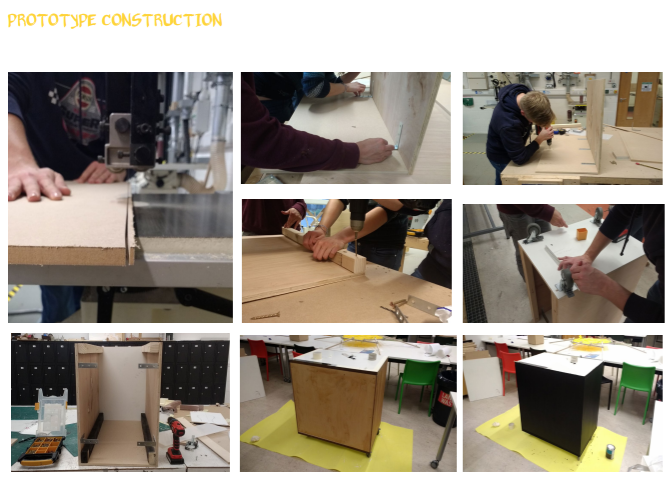 As we closed the mobile cafe presentation - the full presentation here - architect George Lovesmith asked about the handover of the project to the library volunteers. We heard that there will be a community painting session to add detail to the wooden mobile cafe; and that it will be used for the first time at the Maindee Christmas Market on Saturday 2nd December. However, George’s question illustrated that many of the creative and artistic projects being done through Finding Maindee are pretty speculative…


Through Cinema Speaks Bernie demonstrated a desire to help people connect; and which will probably struggle to make any real income unless lots of people come or the audiences connect with us activities. For example, if the mobile cafe is practical and works well then it create economic options for the library and outdoor events in the community. In essence it takes time, effort and imagination for possibilities and new markets to emerge in Maindee: it was this angle that Fez took as he explained Holbrooks and the Photomarathon.


Earlier in the year Fez took a tenancy on both the flat upstairs and the former shop below at 80 Chepstow Road. He explained how the Newport Photomarathon [on Saturday 28th October] had taken place from the shop: indeed all of the photos submitted from the 24-hour event were on show across 6 large printed poster on the walls around us.


The event had started as an idea at the New Paths Gathering in July 2017. In a very short space of time a group of people got together to offer a popular experience which 146 people completed. As part of the Photomarathon there were 6 different photography workshops - including some at the Riverfront and at Horton’s - as well as the Camera Obscura which Dafydd Williams from the Kickplate Project subsequently ran for a week at the Triangle. 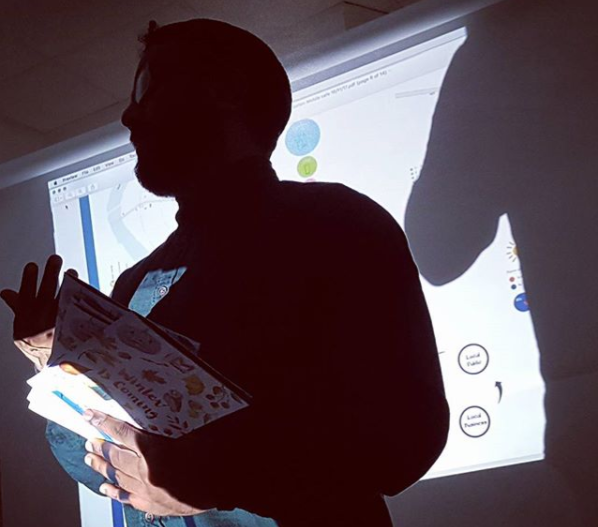 Unlike many of the other events run through Finding Maindee, the Photomarathon included a paid entrance fee - albeit for a relatively small sum of £5. As Fez had outlined to us at the start of September, there had been commitments made by different sponsors and partners. Fez told us at this November New Paths Gathering that people had followed through with their offers of support worth roughly £3,500 in total.


Of the supporters, we heard about what Minuteman Press had contributed in terms of printing and also how Newport Photomarathon participants were able to get around the city at no cost thanks to Newport Bus. Fez cited this latter example as a particular success as Newport Bus had never previously supported many events. The official awards night for the Photomarathon takes place in the Riverfront from 6pm on Friday 1st December, where the other sponsors such as Camera Centre and Coleg Gwent will be presenting prizes.


There was sense that people make markets; such as the belief shown in the first Newport Photomarathon. We are very pleased that a sense of collaboration has been supported through Maindee Library and all the artists and makers that have got involved to date.


Fez finished by stating that he wants Holbrooks to be a collaborative space. He described how "space designs us as we design space." Chicken meet egg; egg meet chicken. We have to try things and our model is one of collaboration and building audiences. This will be the last New Paths of 2017 so thanks all for presenting and coming along to the ten sessions that we have hosted in 2017. There will be more next year.