We try to write up a record of every New Paths before the next one takes place. On this occassion we are only just going to get one in before the session tomorrow on August 10th at 6pm with Stephanie Roberts and KHBT.

Last month we had an update from George Lovesmith on the library project which then linked us into three presentations from art spaces in south Wales. First of all we heard from Dan at the Elysium Gallery in Swansea, followed by Dai from Made in Roath in Cardiff and then Zosia and Dafydd from the Kickplate Project which is currently working in Pontypool. 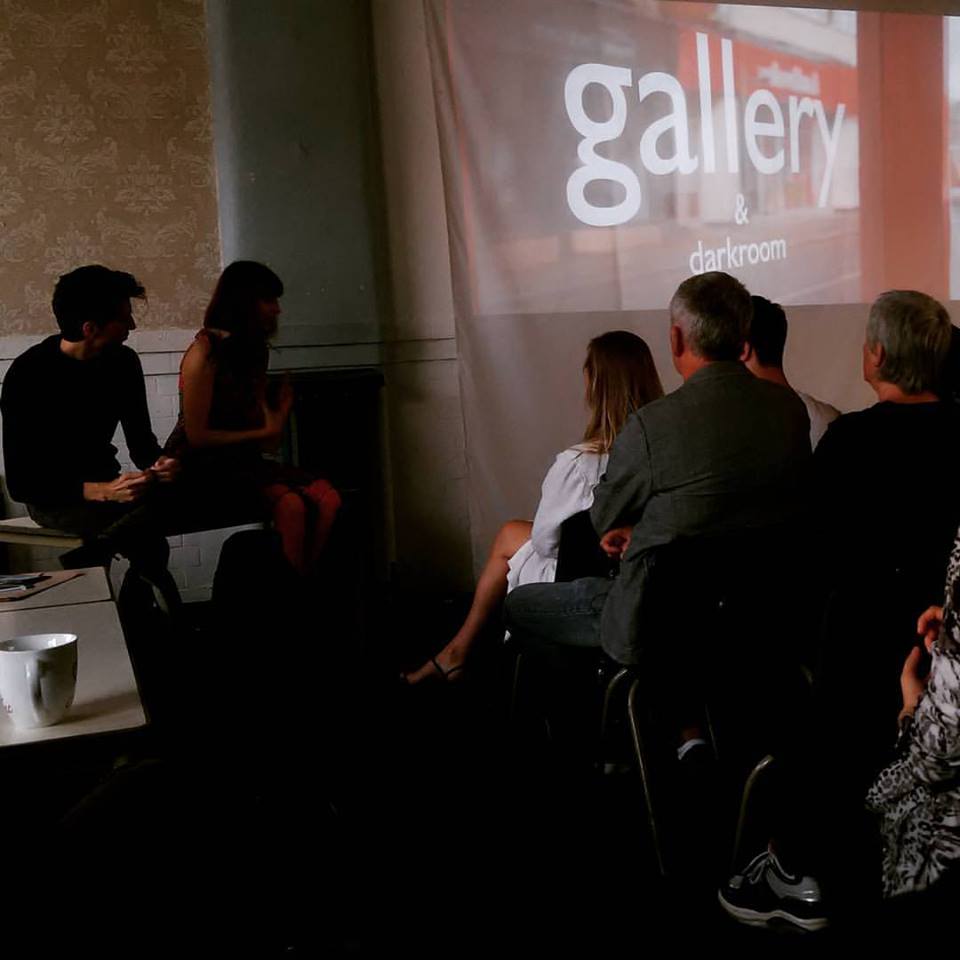 We moved on from these presentations to hear a little about plans for the the 2017 Newport Photo Marathon with Fez Miah and the finishing with Karsten and Bernd giving their perspective on the Maindee Triangle. There is a longer write up about KHBT on our blog; they will be joining Stephanie Roberts on the agenda to host a workshop at the New Paths session on Thursday 10th August.

George Lovesmith provided us with an update on the library project. There are some more recent blog articles about Maggie and Kim's work to gather ideas for the future (11th July) and the workshop (2nd August) where we became architects and had to consider how to make choices and spread resources.

With the help of Newport-based artist Kate Mercer we were able to bring speakers from 3 different art spaces in south Wales.

The first of our three speakers was Dan from Elysium Gallery in Swansea. Elysium were set up in 2007 [there is an archive on their website] and they have occupied different spaces within Swansea, including the former Baron's nightclub made famous in Twin Town. Dan explained how they had never really received any signficant funding and had always needed to earn income.

They are currenly occupying the third floor of the former Iceland building on Swansea High St [where Volcano Theatre are also based]. Elysium accommodates space for many things, including: a gallery; capacity for residencies; 35 studios as well as giving room for the MA in Fine Art. Dan described the space as '...the middle ground for people between a kitchen table and an office rental.' Another way of seeing it is a first rung on the ladder for artists.

As they look towards the future Elysium need to keep on earning money [turnover will be £90,000 this year]. They realise that artists are often some of the poorest people in society and so try to keep their spaces both flexible and cheap; they are also keen to offer courses in creative entrepreneurship to artists.

Elysium also have an eye on the process of gentrification on Swansea High Street and whether this means that they have to leave their current base. This is of particular interest to us in Maindee as regeneration initiatives have a long history of leading to artists being priced out of the places that they have helped to change.

Our second speaker was Dai, who manages social media for Made in Roath in Cardiff. Made in Roath has been going for 9 years and is very much a community-art based movement which centres on two annual events: Made in Spring on the first weekend in May and Made in Roath during the second week of October. Lst year there were 157 people were 'doing things' as part of the programme.

Made in Roath is a celebration of different art forms, including carnivals, spoken word, poetry, visual arts and people opening up their houses. It is the latter group of activities which are perhaps the most memorable. Dai recalled a living room being open as a mini art gallery, temporary cinemas and the installation of items from the National Museum's natural history collection on display within 32 Kevlin Road in 2015.

Dai explained that Made in Roath had explored fringe events over the years, but that they were settling on the core programme described above. At the heart of the operation is a group of volunteers; artists get paid something even it it is just a little. Dai finished his short presentation by explaining the story of how 60 starlings released in New York City and grew to a population of more than a million; to paraphrase you don't know where art will go...

As we moved towards the third of the art space talks Fez Miah put forward the idea of a photo marathon to take place in Newport this October. Fez will base the Saturday 28th event from Holbrooks shop opposite the library and there will be a series of workshops also taking place. The proposals have moved on a great deal since New Paths and there is now a Facebook page setup for the 2017 Newport Photo Marathon.

Zosia and Dafydd presented us with the Kickplate Project. The Kickplate Project started with a space Abertillery and then moved to Bargoed [7 shows in 9 months] and are now based in a former Plaid Cymru office in Pontypool. For clarificaiton the space in Abertillery is still in existence, and called Kickplate, byt run by a different group of people.

The Kickplate project challenge perceptions of the south Wales valleys; that's to say get away from industry and coal mining and present art that appeals to people from the working class. They want to tackle the attitude that all the valleys need is 'low-level community arts.'

In contrast to Elysium they are not commercial and seek grants for their projects. Zosia and Dafydd explained that it is sometimes hard to present a programme for a grant application; and then wait for that application to take its course. However, they said that their work is fun and gave the impression of being able to help people on their own creative journeys. For example, Dafydd talked about how he had set up a dark room in Pontypool and managed to source many materials that are not always easy to find.

John Hallam introduced Bernd [below left] and Karsten [below right] who are called KHBT and are working with us on the Maindee Triangle project. A longer article on this blog introduees KHBT and their work. We look forward to you meeting them again. 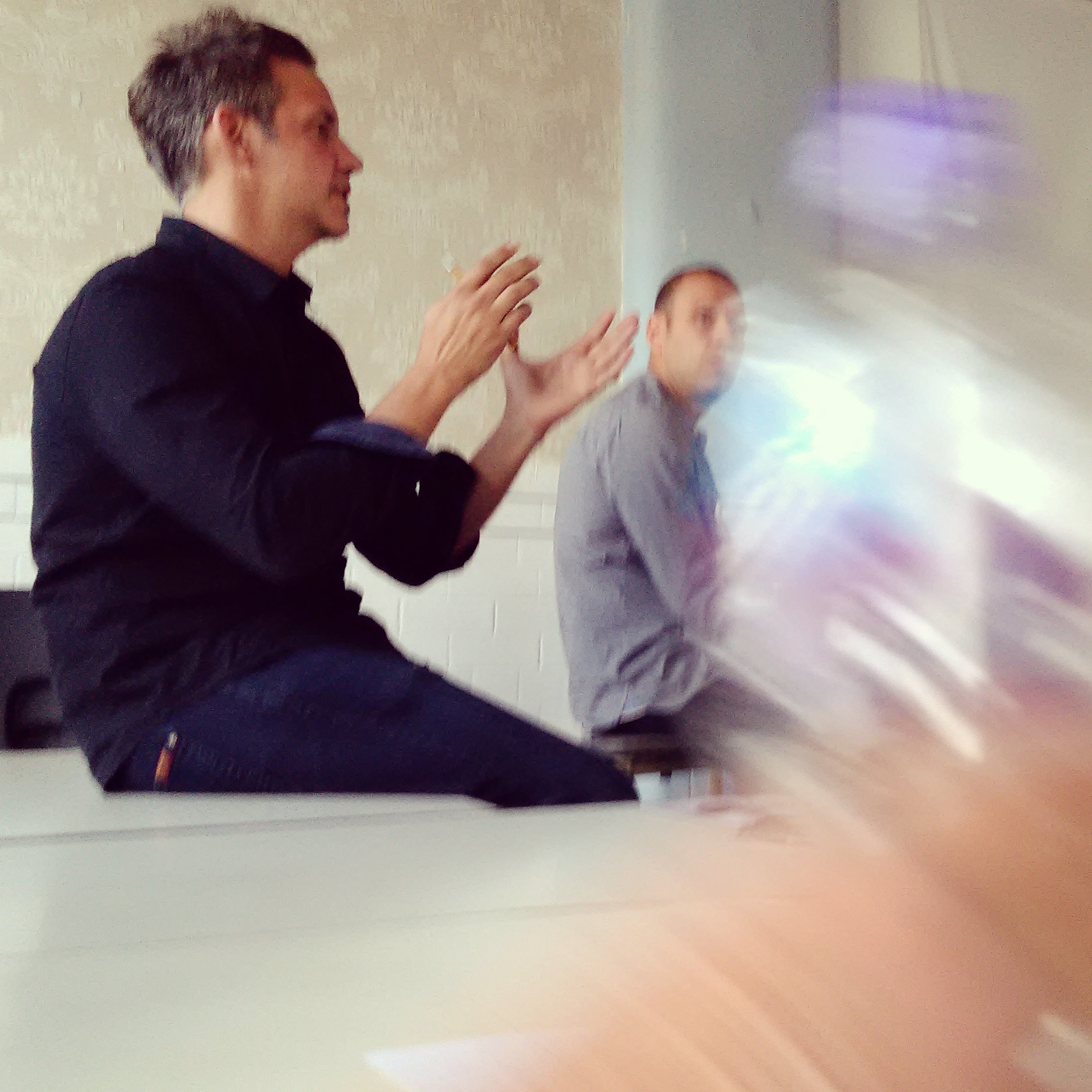 George Lovesmith with an update on the library project

The Elysium Gallery in Swansea

The Made in Roath in Cardiff