It is just over two months since we last reflected on the Maindee Triangle around the toilet block and land on Livingstone Place. The good news is that our second design proposal - the yellow one - recieved planning permision at the end of March 2018. There is now scope for the striking semi-circular climbing wall to be erected with vegetable planters just behind [see left of design below]. There is also permission for a cafe unit to be provided within the toilet block [see right]. The middle of the site would be a grassed area under the trees [shown as red circles] and with seating on the low walls. 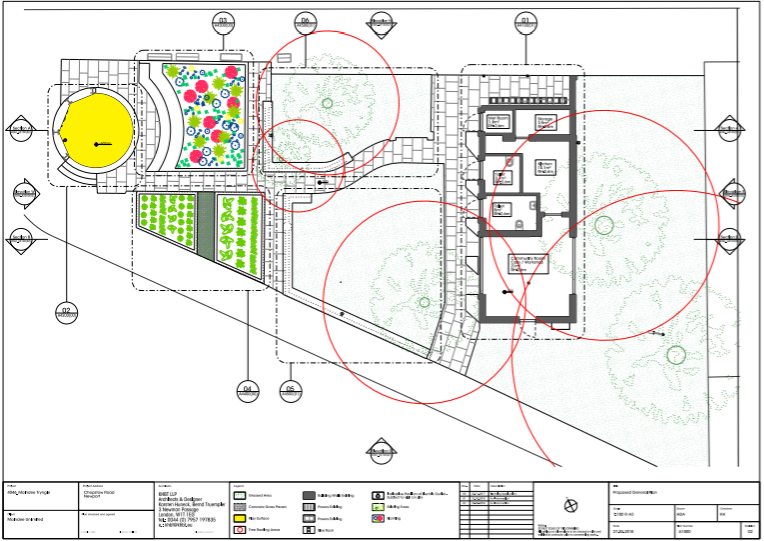 This blog explains some of the challenges that remain and how some of the fundamental design features have been changed through the planning process.

What happened as a result of the planning process?


We are fortunate that the Newport planning portal gives a detailed account of the planning process: clicking on the 17/1111 reference will link anybody to all of the consultation details. For example, there are responses from Natural Resources Wales, Welsh Water, from any local residents who take a view and also from different parts of the Council.


The planning process is very much a negotiation: the planning officer mediates the relatiosnship between the applicant, different types of planning policy and the responses of various consultees. Some design features are removed because the proposal would not have otherwise gained planning consen; others are added or amended. By looking through the consultation documents for the newest items you can see how the drawings reflect the negotiations. The most obvious change [as shown in the final design] is the removal of playful elements such as the swing and the lamp shade. We can now explore why some of these changes have been made. 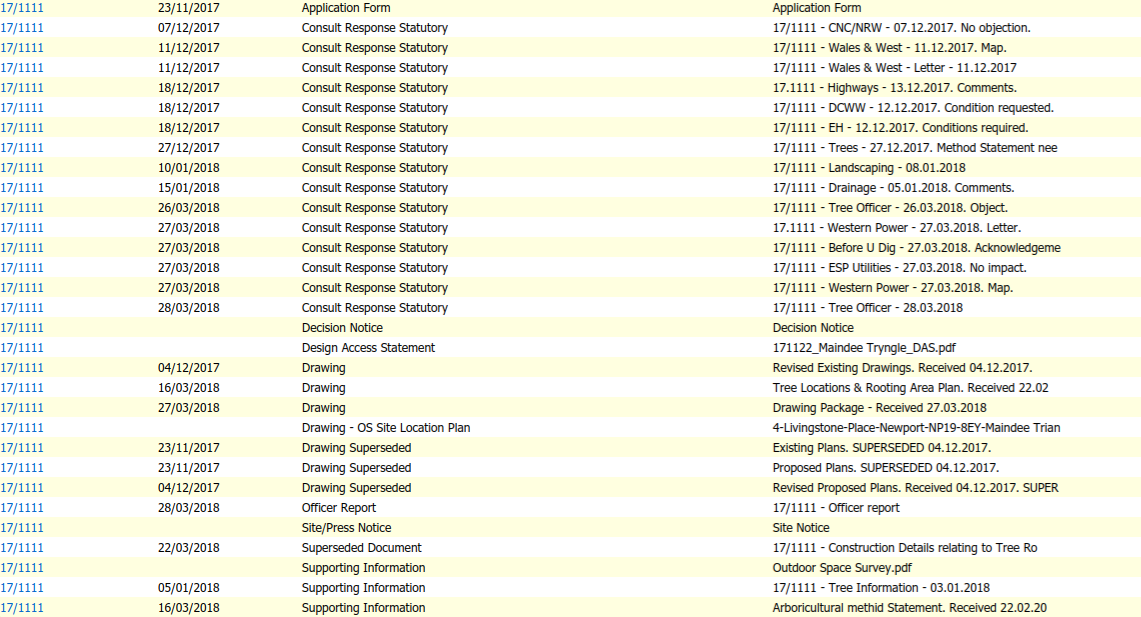 The Triangle land belongs to Newport City Council. However, it is Maindee Unliimited who have proposed these ideas. The Council have to be careful about what they permit in planning terms and then grant in terms of a lease. Newport City Council’s local planning policies and their influence as land owners has made some changes to our original designs. In one example the swing has gone form the scheme due to safety concerns. However, Newport City Council  have had a significant influence through 2015 policy for trees which are on their land and 2017 Supplementary Planning Guidance: Trees, Woodland and Hedgerows.

There was a formal objection from the tree officer and so KHBT produced drawings to meet their concerns. The planning process has determined that there are no hard surface below the existing mature trees on the site. Any hard surface finishes originally proposed have been removed and the site would now be covered in grass apart from the existing building and the vegetable planters and climbing wall at the front. We can see that Newport City Council have shown their values as supportive of trees in urban environments.

Urban trees are political and those who have followed the recent story in Sheffield will know that local authorities can get into lots of trouble because of them. The local authority in this south Yorkshire city have a policy [and large private contract] to cut down mature street trees and replacing them with much smaller examples. The argument is that tree roots disturb paving and road surfaces. Also many residents complain about leaves falling on their streets if they are not cleaned up quickly. To replace larger trees with small ones gives the local authority many decades of breathing space: roads and pavements will not crack; they will have to put less time and money into street cleansing. Although they are spending a lot of money up front, they will have reduced demands on their day-to-day maintenance budgets. Many in the public sector would call this an invest to save example… However, let’s go back to the term ‘breathing space’ and consider what this means for the citizen. People love trees in terms of their visual appeal across the seasons and also because they help to clean the air. If we look at the old photo [see below] we know that new trees on the Triangle would take many decades to grow again. 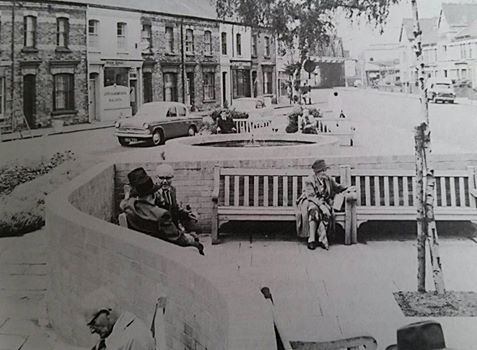 Hopefully the above paragraphs explain the changes made been through the planning process. In many ways the project will be cheaper to implement as we have fewer things to build; and we test the KHBT philosophy of changing as little as possible. We can consider how to plan the rest of the project: that’s to say the real detail of what goes where.


And about detailed planning


The architects created a 3D model of the site and have given us drawings with detail on the climbing wall, raised beds, wall details and so forth. There is nearly enough detail here to give the plans to a contractor to price and build. However, we are likely to use a quantity surveyor [QS] to look over the plans so as to determine the amount of demolition, quantity of material required and so forth. From talking to a QS about this project he said that many construction companies get into trouble because they sometimes under-estimate a job in terms of time required or the costs of each element. Once they have agreed a contract the client will either suffer in terms of quality and/or time or the contractor will lose money. Again looking at the wider context, it was under-estimating some contracts [and large shareholder payouts] which recently sunk the contractor Carillion. 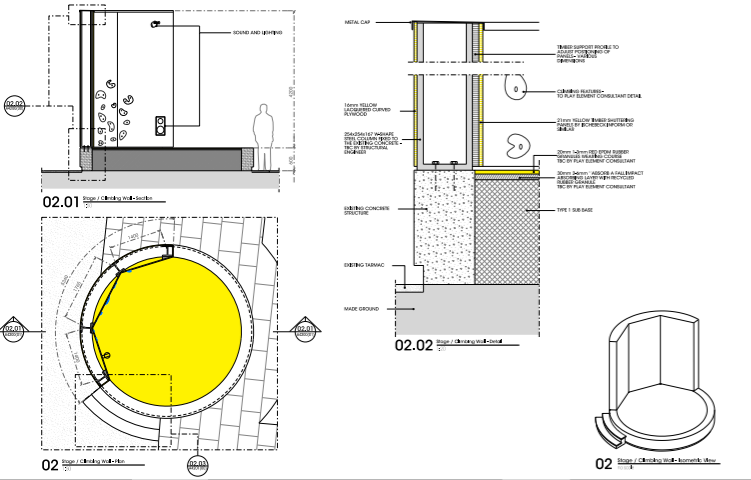 There are lots of details for the outside elements of the Triangle [see design above] and so this work is probably not too hard for a contractor to understand once a few more investigations have been made. However, it is with the building that there are a number of unknowns.


The more people spend time inside the building there is something romantic about its history - certainly Dafydd Williams must have felt this when he setup the camera obscura. At the moment it is split into 3 distinct sections: the individual toilet cubicles at the which face onto the site; the rabbit warren of space behind these cublicles where the gentlemen used to have exclusive access and the bit on the side by Chepstow Road which provides a cover.

We think that the entrance to the women’s side would have been off Chepstow Road whilst the men would have accessed from Livingstone Place. At a certain point the men’s toilets - including the urinals - were closed and the women’s hacked apart to create the unisex facilties. The space behind has all sorts of weird remnants of old toilet cublicle, bits of plumbing, ducting and other objects in the most inconvenient places. For example, the toilet sisterns for the cubicles are housed on the walls behind the units. 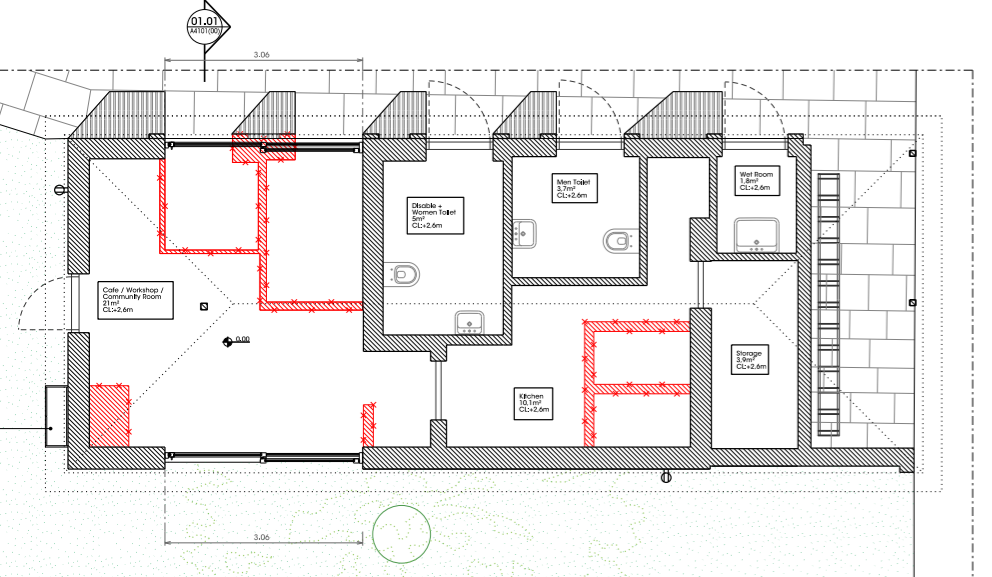 These would need to be cleared [see items in red on above drawing] in order to make the space suitable for the proposed cafe and commuity space. Without looking at the Council’s records it is hard to know why these changes were made, but some browny/yellowy tiles give a clue to anybody brought up in Newport in the 1980s. I think I can trace these tiles to the changing rooms at the Newport Centre and maybe also Maindee Pool. These were the deays before Newport  had county borough or city status and everything Council from the park railings to Newport Transport buses were a grey-yellowy colour. These colours stick in our minds and soul; maybe we should see how that yellow compares to KHBT’s proposals [see below]... 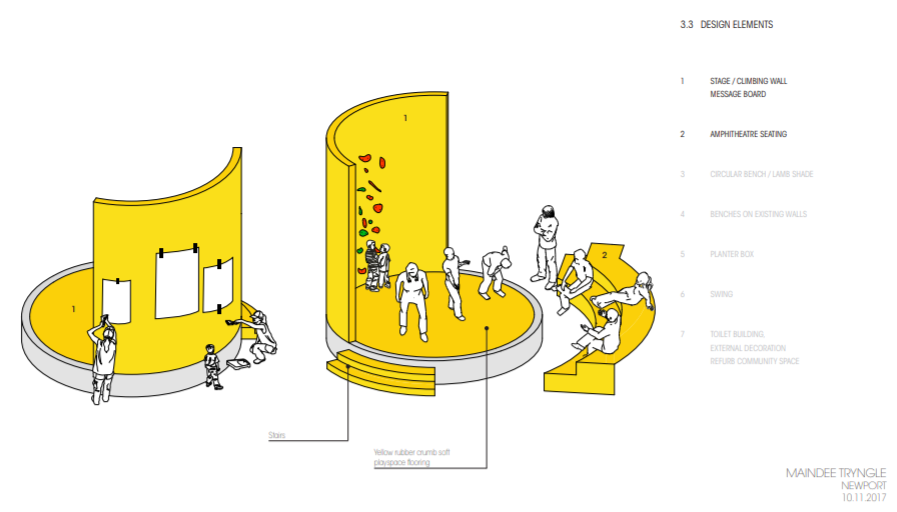 Digging a little deeper into the building we find some shiny old white tiles similar to the ones found at the library. So maybe the building dates back to the 1930s and was made at a similar time to when the current library was changed from being the fire station? Though tempting to go into further reminiscence is is worth pointing out that all of these old features within the building make it more complicated and potentially more expensive to renovate. In the near future Maindee Unlimited will have to decided whether to phase the project: to do the outside space first and then concentrate on the building afterwards?

Further blog posts will explore the emerging business case around the toilets and potential cafe; also the terms by which the Council will agree to an asset trasfer of the land in a similar way to how they have passed the library to Maindee Unlimited.