This blog post is one part of a long overdue progress report. A substantial amount of time has passed since our last update; since the library re-inhabited 79 Chepstow Road, from our temporary home at Holbrook’s, back in June.

Changes have taken place both internally and externally, and over the next few weeks I will be sharing what has been happening.

Our team of volunteers started moving furniture and equipment back into place once the plaster had dried and the builders had vacated, and for two days during the second week in June, it was all hands on deck. Rearranging the main room proved to be the biggest challenge as the carpet had been cleaned and all the shelves, books, furniture and gubbins had been forced into one end of the room (having already been moved once to allow the whole carpet to be cleaned!)

By the end of the week, Communities for Work and Citizen’s Advice Bureau were returning to the library for their usual slots in the new meeting room, so by Thursday of that week we had to be ready.

In a previous post, Aled detailed the preparation being made to re-inhabit the library space, and when we first occupied the space again, the obvious changes were as his blog post stated: the lobby, the introduction of a commercial kitchen and the renovation of our toilets and meeting room.

Aside from a lick of paint, the main room remained, to the naked eye, unaltered; it felt like an anti-climax. The work carried out on the main room: the fire alarm system, emergency lighting and Rockwool insulation in the ceiling didn’t have the show-stopping effect our volunteers and returning guests had anticipated, especially after having waited such a long time to return.

However, once you crossed the threshold of the new spaces, the changes were tangible… starting with the lobby.

The lobby space hasn’t been increased in size but additional access has been provided. A stable door has been fitted to allow access directly to the kitchen, in addition to the original double doors leading to the library. In keeping with our new colour scheme, both have had a lick of canary-yellow paint.

As the first point of contact for a visitor in any building, home or library, the lobby is a valuable space. It is a transient space but should be a welcoming space. We have tried to make changes that will allow us to maximise this, and to maximise the wall space!

The lobby in June…

A large blackboard greets you when you walk in... 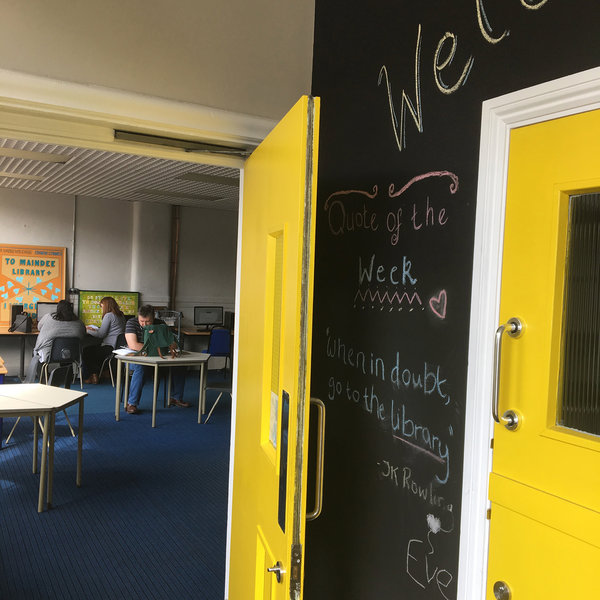 This will provide a changeable notice for: what’s on in the library, what’s cooking in the kitchen, and for events and opportunities in the wider community.

It is hoped that the library volunteers (or just one) will take ownership of the blackboard to help ‘monitor’ what happens on there: refreshing posters and notices that are no longer in date, scribing a ‘word of the week’ and encouraging our visitors to use the facility. 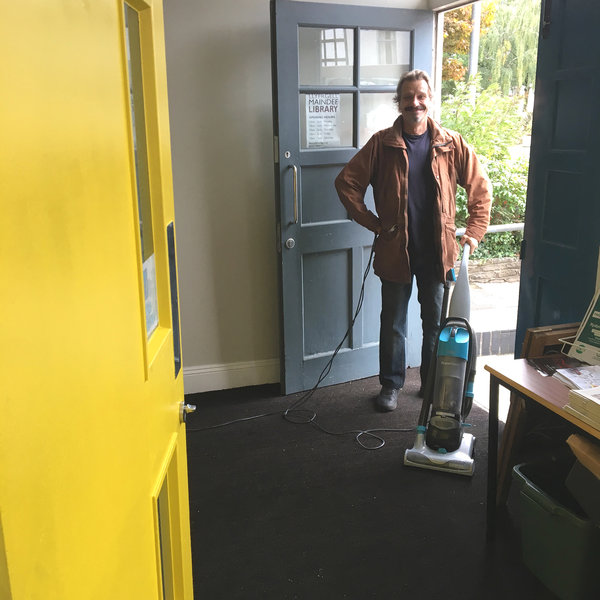 The entire floor of the lobby has been turned into a 'Welcome mat' for visitors to wipe their feet.

The lobby in November…

The word ‘welcome’ had been chalked on the blackboard as an offering and an invitation, and the invitation had been accepted. It looked like our hopes for volunteer ownership and visitor participation had been realised: within a short space of time, a collection of chalked marks had been made, alongside colourful and creative doodles and a thought-provoking, authorial word of the week.

After the fourth or fifth week without rotation, the blackboard was in danger of becoming a forgotten space, and the lobby, a space to move quickly through, rather than look and linger.

Something needed to change… so it did!

Noticeboards are the subject of many a discussion at many of our meetings. In this transitional period, only one notice board remains, containing the notices we are legally required to display: Premises Licence and Certificate of Employers’ Liability Insurance. 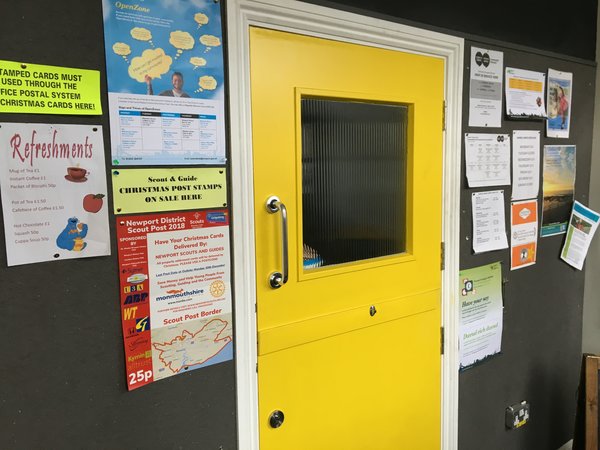 For an instant hit of low-cost, high-visibility communication, it was decided to turn the entire lobby wall into a noticeboard. It’s early days but people are noticing and lingering, asking to put up event notices and asking about event notices. 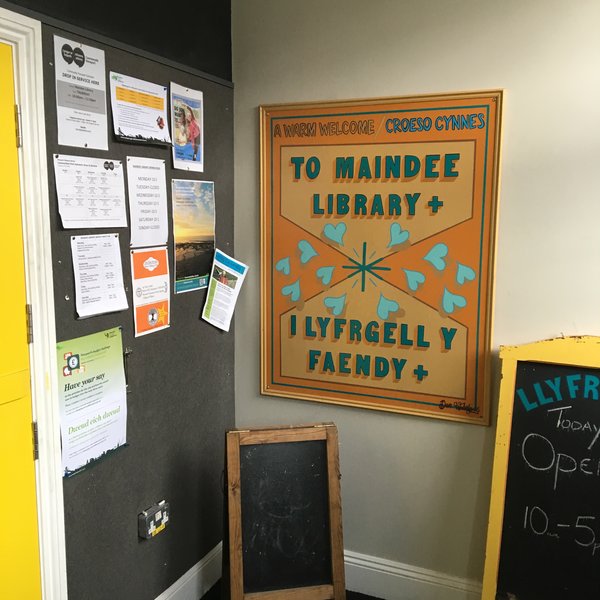 We have utilised dead wall space in the lobby with one of dave Wakeley's library signs. It adds a sense of colour and play to the space.

There is still a way to go. We would like an outward facing noticeboard or simply an outdoor noticeboard and we await planning permission before we can advance with those decisions. The volunteers noticeboard should be the next to materialise, perhaps when the reception desk is installed.