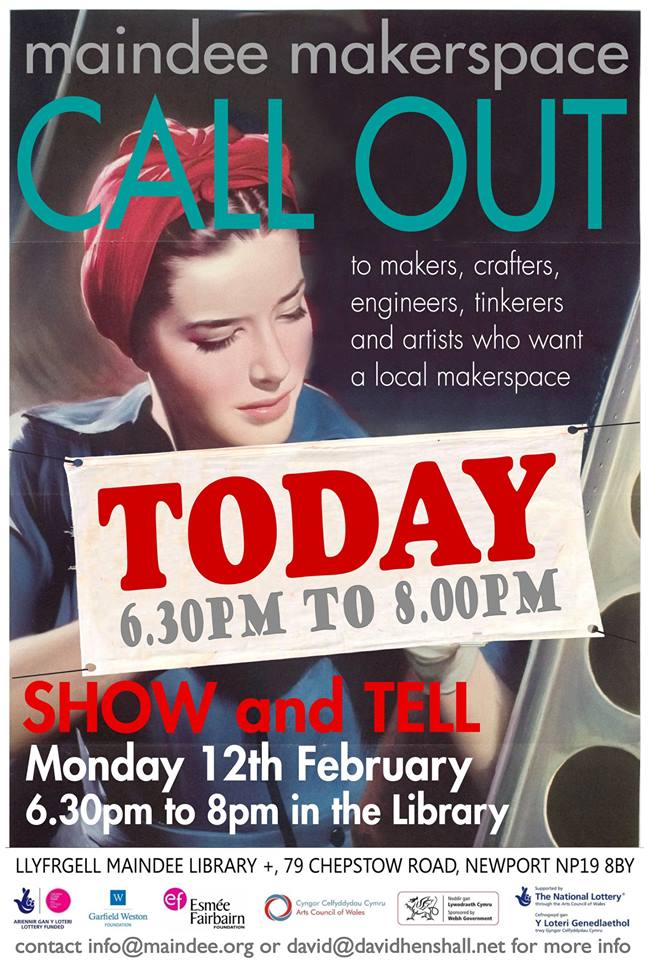 
Richard is a member of the Bristol Hackspace. Loosely speaking a ‘hackspace’ works with electronics and a ‘makerspace’ is something more broad. Through his presentation of various maker projects he explained that people value the collaboration that a shared space enables; and that maybe it is more than just the technology.


Richard’s examples from YouTube demonstrated his way of thinking about different projects, namely that there are three elements: [1] the maker[s]; [2] audience; and [3] what’s it all about? Examples to look up online include Sketchy and Catwigs.


Andrew showed us how he had made a model steam engine from a kit. His work showed a mastery of many different types of tools for cutting, milling and more. Through his project there was real attention to detail and an appreciation that people really get into their work over some months and years.


This second presentation took me back to my teenage years of A-level Design and Technology where I learned to bend and mill out steel and also to drop cast aluminium into sand moulds - for which I still have the odd nightmare that I will never finish. As such you connect with how people have a real dedication to make something happen.


Jason explained 3D printing: designing objects as a computer model and then seeing them made as material objects with a special printer. Jason let us hold an object that he had produced [see below] and explained the different methods and different types of plastics. 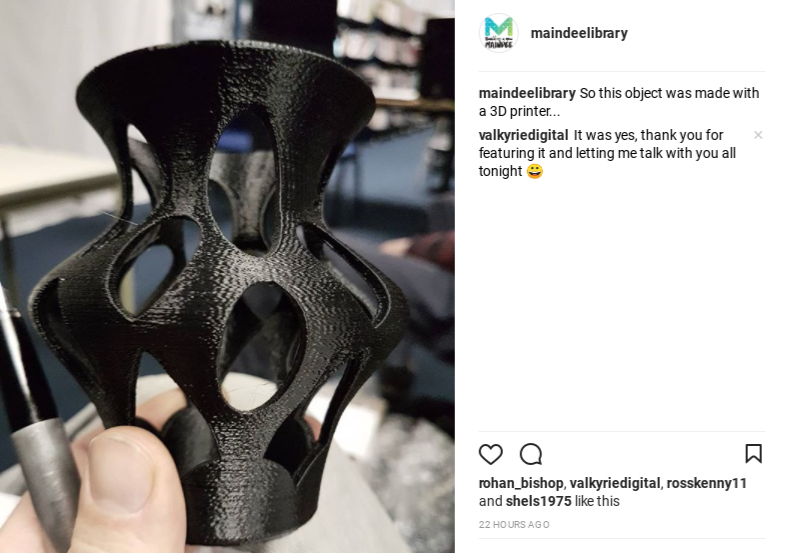 Although the idea of making our objects in a printer may seems like expensive and hard, Jason explained that some of the equipment is now very affordable - printing machines cost from as little as £300 to something around £1,000 - and that software such as Fusion 360 can be free to people involved in maker co-operatives. Find out more about Jason’s work on valkyriemedia.co.uk


Sandra followed up Jason’s presentation with something which is very obviously made by hand - and with no digital technology involved. Her talk was very brief, but it was clear from Sandra that her love of embroidery had allowed her to collaborate with other people. For example, she had worked with our next presenter [Marion Webber] on a project with women at Community House in Maindee. Embroidery had allowed influences and cultures from India and Pakistan to all feature in one shared piece of work.


Introduced by the previous speaker Sandra Fowler, Marion has been doing creative community projects in Maindee for nearly two years now and has presented to our New Paths gatherings in 2017. The most interesting thing about Marion’s angle on this subject is how she started incorporating technology within her work. Marion recalled an exhibition of her own artistic work - lost connections - where she connected her paintings to music and soundscapes using QR codes next to the images.


Marion built on this work through a session featuring simple electronics organised by Victoria Jones at the Arts & Education network. In front of Marion on the table were various objects and wires which she had discovered at the latter workshop; she explained how audio files are stored on an SD card and connected with Bare Conductive touch board. Different interactions will trigger these sound files - such as with the picture shown below. 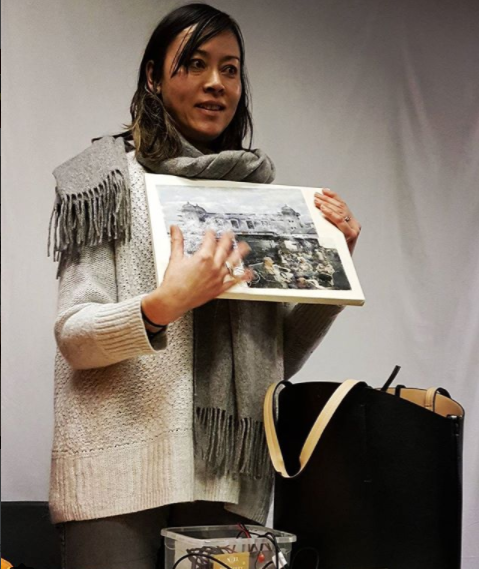 We heard that some of these ideas are now finding their place within the 1,000 Voices heritage project that Marion co-ordinates at nearby Community House on Eton Road. For example, there was a clear sense of playfulness in a drawing machine which Karen O’Shea helped to demonstrate.


Through a bit of discussion with the audience we learned that Marion’s future work will include some writing workshops at Maindee Primary School, including workshops with poet and rapper Rufus Mufusa. The spoken word will be connected to objects by using digital technology like the touch boards.


John Hallam explained the background of Maindee Unlimited as a charity and how the organisation is a kind of self-help group for people who live and work in Maindee. John told us how there may be an opportunity to work with an organisation like Wastesavers to have some sort of presence on Chepstow Road for a makerspace. David Henshall shared his experience that there is a 'do-ocracy' behind most makerspaces; and that spaces become possible if enough people get together and are able to pay a little every month.


John Hallam explained that Maindee Unlimited are about to advertise for work to be done in the library space: for example we are going to need new curtains and things that can be made out of wood. John suggested that we explain the detail of the library work to the next meeting and also bring a budget.


Although the offer of some paid work [through Maindee] seemed interesting, David Henshall explained that making things is different to jobs and work… this is also about pleasure. We certainly got a feeling that people were driven by their passions. For example, Andrew Wood’s commitment to making the components for his steam engine revealed a desire and attention to detail.


What did we learn?

There were people at the meeting with enthusiasm to create: going beyond electronics to also take in flowers, embroidery, data analysis, clay, the internet of things, family history and much more

There is a Maindee Makerspace Facebook group; also those present were happy to be on an email list

There is a joy to collaboration... and having some beers can help

There will be another session - happening on Monday 12th March at 6.30pm. See you there 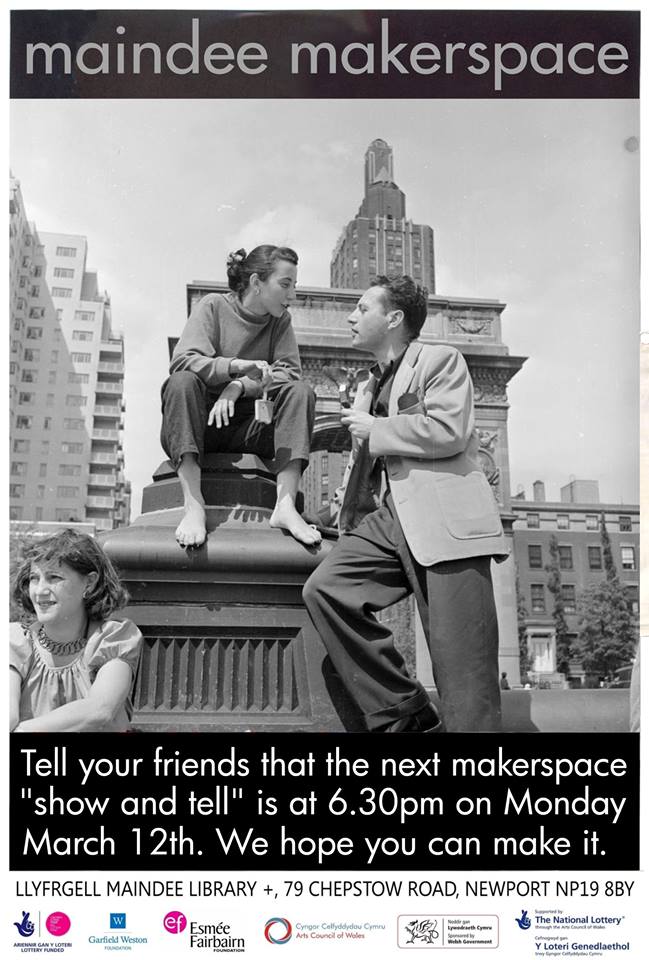