For the last couple of years we have been trying to find Maindee. To be honest this is hard as the people living in this place keep on changing and there are other names which confuse the geography... like Corporation Road, Victoria and even Beechwood. Last week we went to the end of X24 bus route from Newport - to the town at the top of the valley called Blaenavon. 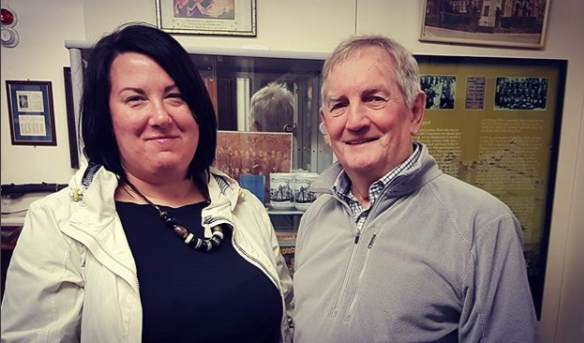 This article mostly centres on what we learned from Jayne Skyrme [pictured above left], who lives and works in Blaenavon. What we found were some lessons about facilitating enterprise and understanding what it means when a place has a strong sense of its own identity.

The main reason for the visit was to swap knowledge and experience: for us to gain Jayne’s insight into the effect of enterprise facilitation in Blaenavon and for us to swap some of the experience of shaping space in Maindee. So what does it mean to facilitate enterprise?

The term enterprise facilitation was coined by Ernesto Sirolli and adopted in many places ever since. In a Ted Talk film Ernesto explains how spending time studying and working in different countries had led him to see that the best thing was to  “shut up and listen”. He found a role for connecting people who had factors such as passion, energy and enthusiasm with knowledge and resources. So far so easy to understand...

About ten minutes in he says something which relates very closely to the arts-led incremental practice that we are following through Finding Maindee. He says that planning is what kills entrepreneurial activity; and that entrepreneurs don’t come to community meetings partly for that reason. It does take some time to get your head around this idea… we can argue that planning is critical, but then we can also sense that sticking rigidly to a plan can be a mistake. 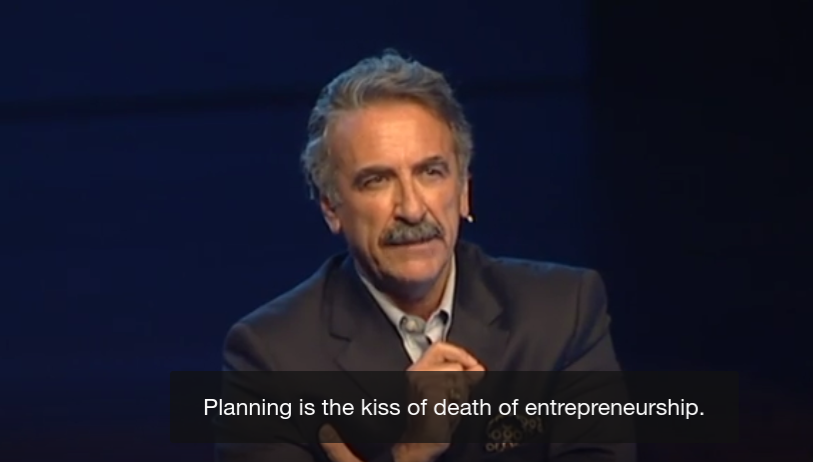 Looking back at our process we have changed our approach with the library architectural project: it was originally designed to rub the slate clean and changed the building in one big hit [AKA the mythical transformation] whereas now it is something where we make smaller [albeit still bold] changes. The key ingredient is to sustain and facilitate the passion of the library volunteers and the local community,


Jayne explained that her job when working for the local Council on the Torfaen Effect project was to connect people with existing businesses: mentoring and confidence-boosting rather than giving people cash. For example, Jayne said that quite a few shop front businesses in Blaenavon are actually selling to the wider UK market via the internet. They got help to broaden their offer and now show their passion for Blaenavon [a town of 6,000 people] by keeping the shopping street alive. Of all the businesses helped across 3 years, Jayne admitted that the number of business plans written totalled just ONE!! Some proof of Ernesto’s theory.


Some more about Blaenavon


Jayne explained that she had moved from her job as enterprise facilitator with Torfaen Council to a role with Blaenavon-based company RWA - incidentally a big part of the network which supported the Torfaen Effect. The company works with many business on regulatory issues, but also focuses heavily on work-based skills and learning through My Development Zone.


Jayne explained that the RWA business was expanding and that they would be moving to a new building… well an old building. The new base is the previous home of the town library [see image below]. She explained that RWA would like some of the space to be used by the community and/or small businesses. However, the building had been closed for a while and would therefore need bringing back to life. 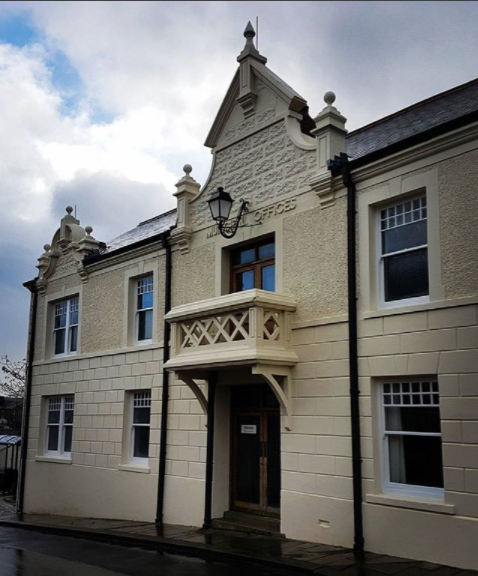 It was good to explain that Finding Maindee - and the Arts Council of Wales' Ideas: People: Places programme more generally - had used seemingly-small initiatives to gradually connect people with spaces. None of the projects has a purpose that is too explicit; more a case of gently connecting people. For example, it seemed obvious that something like the work done by the Kickplate Project would be a good match for Blaenavon. In fact we made the connection straight after the trip.


We were also able to offer the insight that it is worth spending time with the community to understand what is there already. We made a visit to the Blaenavon Workman’s Hall and had a tour around the building. It was fascinating to discover that the building is owned by Torfaen Council, but offers space for an amazing theatre, cinema and a community-run museum. Our volunteer guide John showed us the exhibits. It was clear how the close the community is as he and Jayne swapped names of families and friends - making connections between generations.

Making the connection to a Maindee establishment on Duckpool Road, the museum had some material about the Oddfellows - a group of local business people who had formed a society which had loaned people money and mortgages. This is an interesting way of keeping money within the local economy which maybe also used to happen in Maindee?

Spending time with Jayne it was possible to sense that the facilitation role was still evident in her work beyond Torfaen Council, albeit more in the role of a local community worker or volunteer and with support from her current employer. It was interesting to hear that a community interest company called Sbonc Enterprise had been created to take on some of these community projects. 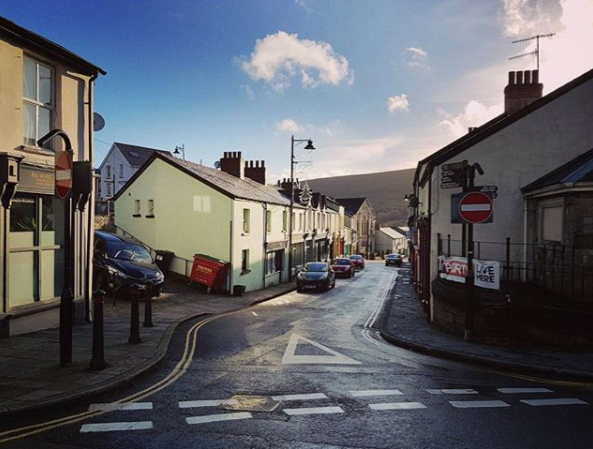 Blaenavon is obviously much more geographically remote than Maindee. Whilst Maindee seemlessly blends into other parts of Newport, Blaenavon is very much on its own at the top of the Afon Llwyd [steep streets and mountains evident in image above]. Over centuries this latter place has learned to survive and trade in different ways to a town or city next to a major motorway and railway line.

Due to geography Maindee Unlimited's work is at the other end of the spectrum to the challenge in Blaenavon: we are experienced in facilitating community development because the identity and culture of our population changes much more quickly [and on a greater scale] than it does in Blaenavon. The library is therefore important to create that space for sharing cultures and is probably the right first step for Maindee Unlimited [again more a case of tapping into passsion rather than actually being planned]. So how about now learning much more about enterprise?


So what next for enterprise in Maindee?


This blog has charted the adventures of Stuart Farnsworth on his Nonsensus, the New Paths gatherings and the work of Maindee Unlimited to get the library going and to develop the space as a community resource. In terms of enterprise the refreshed library is going to have money-earning rentable space through the meeting room and the main space - as well as some income from printing, selling teas and coffees. In the absence of any ongoing cash from somebody like the Council the activities above should hopefully turn enough money to keep the library building going.


It is interesting what Ernesto says about entrepreneurs not wanting to come to community meetings. Chepstow Road business will probably understand that allowing a significant part of the local room hire market is a fair deal to help keep the library going. And perhaps the real social issue of keeping the toilets at Livingstone Place [otherwise known as The Triangle] can be suported with income from of a cafe on site? At that point Maindee Unlimited could consider moving its focus away from operatons at the library and the Triangle so as to play more of that enterprise facilitation role in the middle: connecting and offering confidentiality?


The signs are potentially good that Maindee Unlimited can move towards that facilitation role: trustee Alison Starling has led a group of people to  make the Christmas Market happen on December [see below]. Alison has listened to what Chepstow Road traders have said and has been able to make the case for Finding Maindee financial resource going into artist Jony Easterby’s lighting installation, as well as finding the market stalls, getting the trading licence and much more. 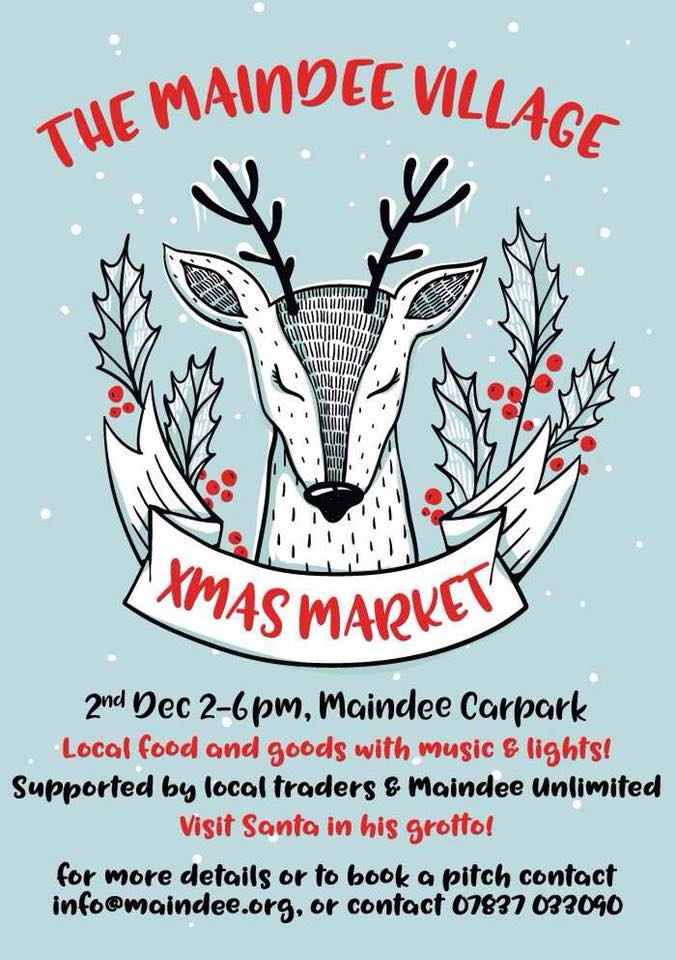 It is worth finishing this blog by sharing the news that Maindee Unlimited have decided not to pursue a funding application to the Heritage Lottery Fund for a Great Places project. In brief, we would have been planning something for which the enthusiasm and passion is not quite evident. Hopefully we are following Ernesto’s advice and helping people when they ask for it. With luck we can get the timing right by connecting some resource to local energy.

Skills and learning through My Development Zone