On the evening of Tuesday 1st August a group of 12 people involved in Maindee Library were given the chance to be architects. We put on hard hats and made some real progress to understand budgeting, particularly the overheads, but we did get to feel how we can all be deal brokers and decision makers. 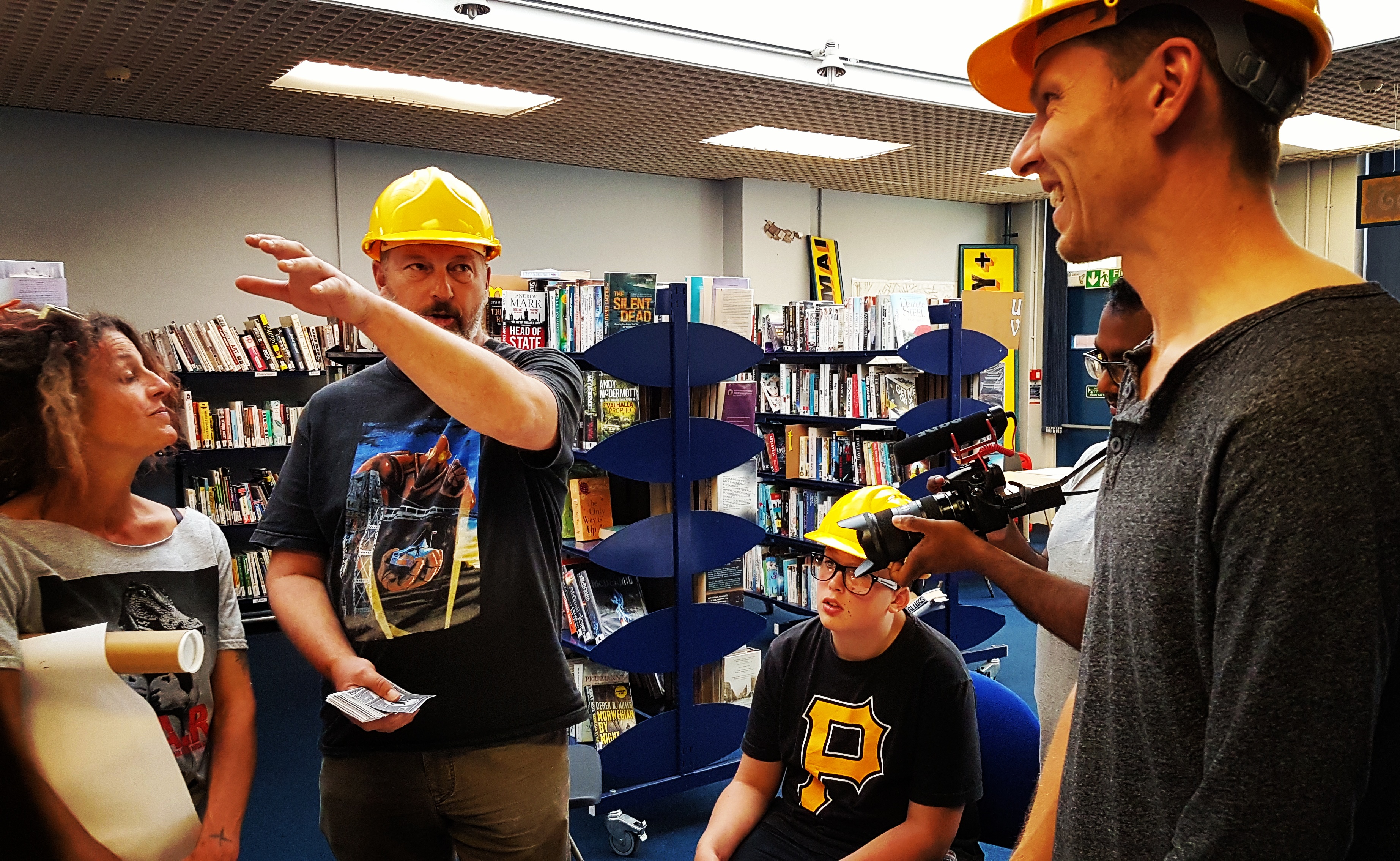 The session was hosted by Rosie Poebright, who created a game which put paper money in our hands, and was assisted by George Lovesmith [pictured above left] who is our real life architect. This blog article takes us through the games that we played and how it really helped to build enthusiasm and momentum for the task that we are currently on.

Pushing our library project on a step

We have a real project where we are working on making Maindee Library our home for the future. We have a budget and we have just under 12 months to finish the task.
You can read about how we have considered different options for developing the building (7th January 2017) before finding architects Sarah Hollingworth and George Lovesmith to help us find an approach which bridges conventional architecture and creativity (18th May 2017).
In our last article (26th July 2017) we wrote about how Maggie and Kim are seeking our views on what the library space could be. The step that we took during this session was to see what is possible now that we have some ideas about what is important.

Rosie had organised a game where we would split into 3 groups. To spread skills and knowledge she asked us what best represented our own interests in the library - one choice from community or art or library. Interesting nearly everybody wanted to represent community more than anytging else! Once in groups of 4 people we were then invited to play a warm up game.
Rosie explained a game called Wu Shu where we had to hold a coin on one hand then go around the room trying to knock coins off the hands of people in other teams. The game got the heart beating and we built up a good team spirit. It was clear that some of the teams were very competitive; to keep things clean and safe Rosie gave out a selection of hard hat helmets and protective glasses!
Dressed as site architects it was then George's job to present each of the teams with the budget of £200,000 in monopoly money: one group fancied storing their money in the hard hard [see below]. George then explained how our budget is being organised, with £155,000 to be spent on building works [white money] and £45,000 [in blue money] to be spent on more creative ways of making things. 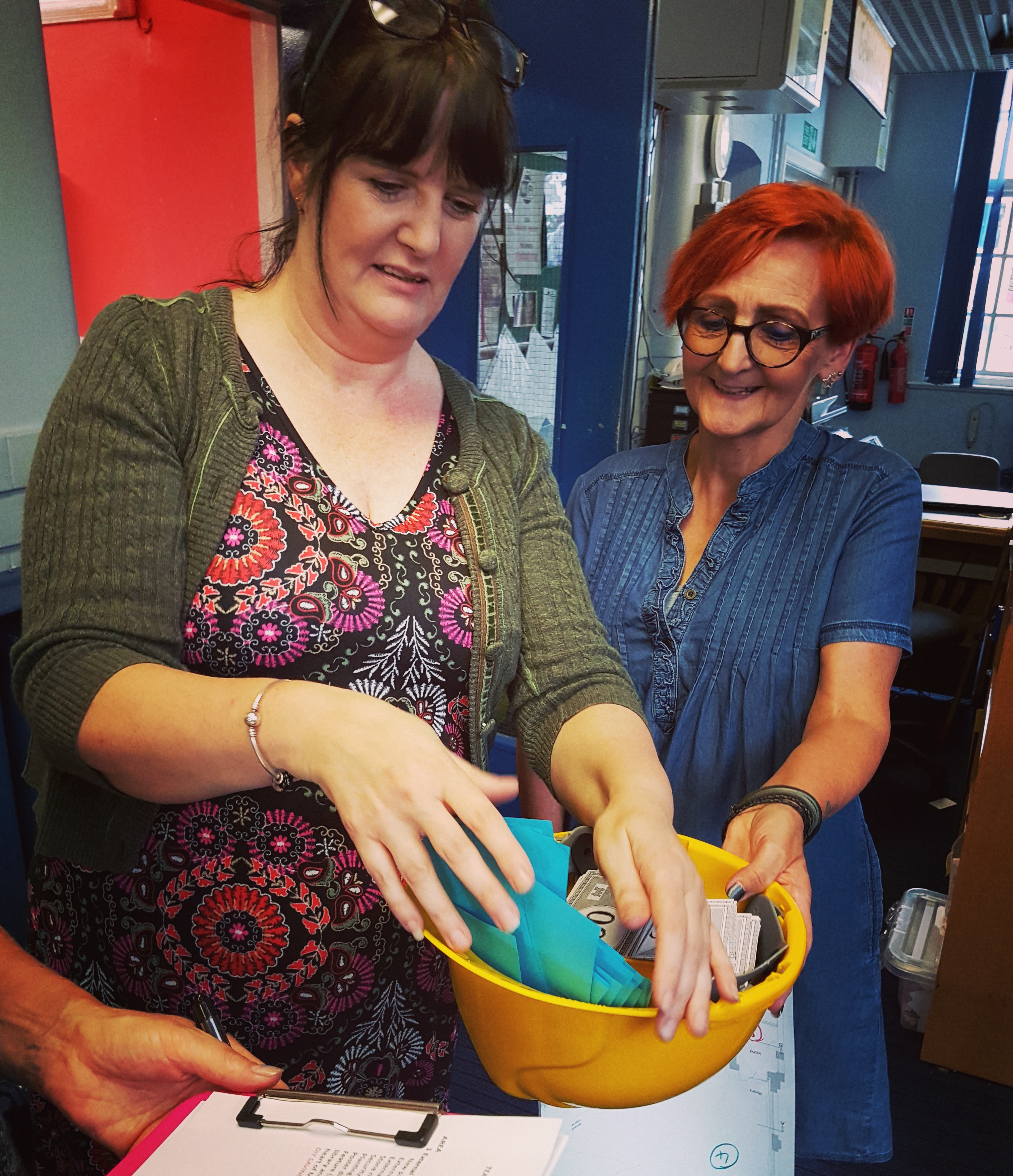 George told us that he was working on cost estimates that had been prepared for the proposed library redevlopment in 2016. He explained that cost estimates are worked out based on the cost of labour and materials: for example we had a cost of £2,000 to repaint and redecorate the main library space.
George explained that where things get more complicated [or expensive] is when you consider that most projects have a principle contractor who then manages the sourcing of materials and the work of sub-contractors. These people are also responsible for on-site health and safety - as detailed here in an article from the Health & Safety Executive. For all of these duties the principle contractor will take a certain percentage of the contract as their profit. In addition the principle contractor will need additional money to pay for one-off items to set the site up for them to work on, like safety barriers and temporary toilets if required.
We also considered that projects should have a contingency sum to cover things going wrong; George recommended a sum as high as 15% of the total works budget. Beyond that figure we also had to set aside money for fees to the Council to get building regulations approval and to pay for other professionals like surveyors. There's also potentially an additional sum for environmental features and local procurement...
Finally we have to assume that we will be 20% VAT paid on top of all the contracts that we take out.  In the end this takes up a huge amount of the money. Local volunteer Kim Lambert said that:
"I think we were all gutted by the overheads!"
All of the money for specifics overheads such as VAT, contingency and so on was put into an envelope. We were then allowed to look at the bill of items [or shopping list] and think about how we could spend the actual cash we had left.

Going out and making some decisions

Though we have funding from the Wales Churches Act and Landfill Tax Credits our main funders are the Arts Council of Wales. We are thereore keen on ideas which involved artists or craftspeople rather than getting an off-the-shelf product. Though not the absolute figure, George said that something which may cost £5,000 from a builder [before VAT and overheads etc are added] could cost £8,000 from a carpenter.
John Hallam challenged some of these assumption that it's really more expensive for local or artistic produce; for example you have to turnover £55,000 to register for VAT. We may be able to find some great suppliers who are very close to us.
Having received our brief the teams took time to explore five different spaces in the building: the space outside; the small rooms such as meeting room and satff room; the main public space; fixtures and furniture; and finally services like electrics and heating which serve the whole buiding. 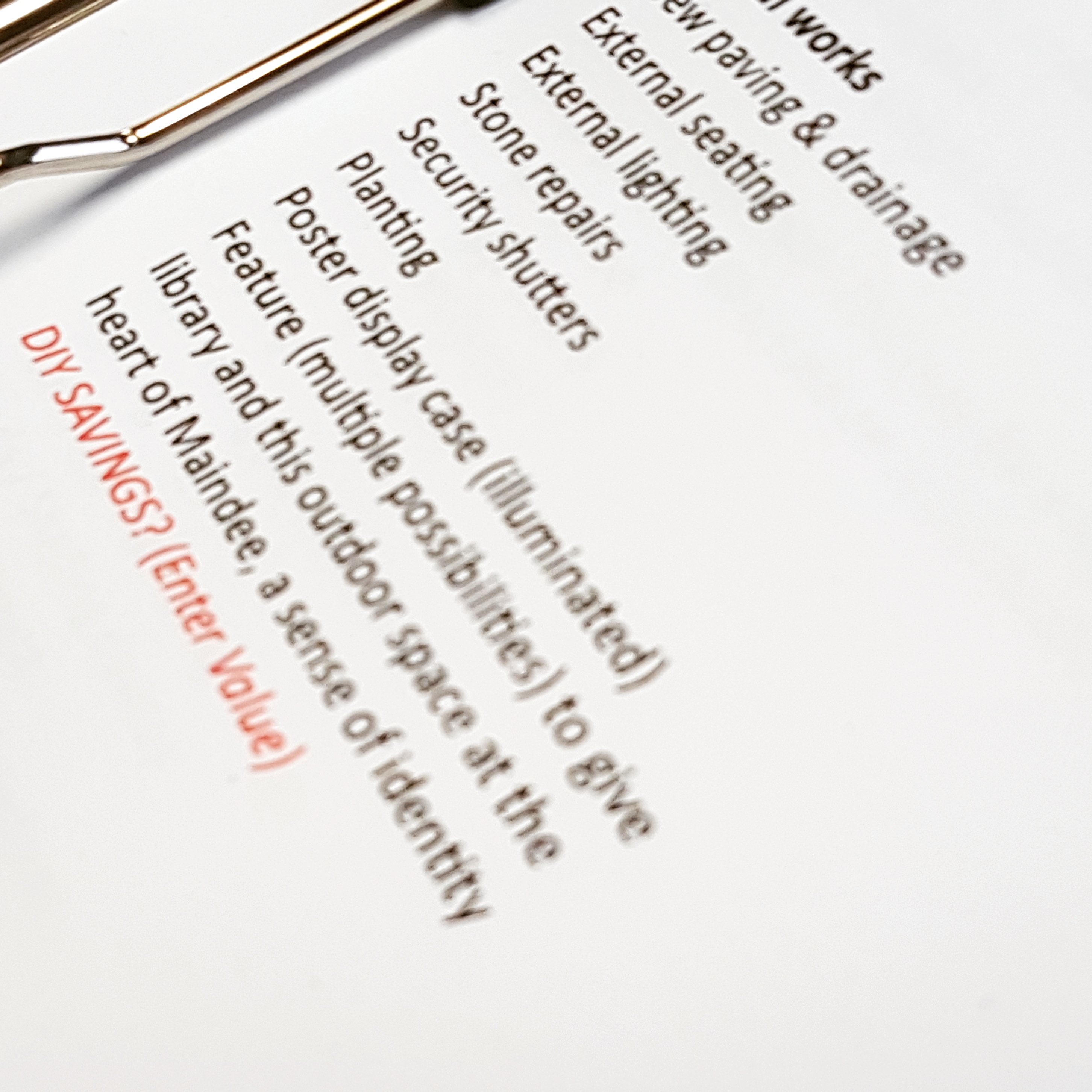 Each group was given a clip board and a list of around 50 items across 5 pages. We were also invited to propose joker cards for ideas that were not already on the shopping list [the joker option is shown above as the red item at the bottom of the list].
As each team went around we considered would it be worth spending more monopoly money on bespoke items such as shelving? What is the value of improving the small space next to the bus stop outside? Could we do it ourselves and add some more planting here? Could we make better use of the space currently used for toilets and create a more attractive meeting room?
After close to an hour the groups had gone through the options and decided how to spend it on the different elements. The paper money was all spent and physically placed on the different spaces.

What this exercise provoked

We will look at the clipboards and explore the findings over the next couple of weeks. Before that it is worth sharing some of the initial thoughts which came back.

- Artist Marega Palser was quite shocked by the cost of everything and asked if we can we do it differently? Can we sse creative ways to make things?

Responding to Marega this project is definitely a chance to be brave. It's taken a lot of bravery to make this vision for Maindee Library all work so far... why not go that bit further and see how we can find ways to save money?

- Evan Lambert pointed out that some some spaces are not so private. He asked how do we deal with this? Could we improve the sound proofing?
We talked about some ways of making a cross-over between the practical and the creative. For example, could there be a room divider within the main space that can be folded and includes different art works within it? We have long wanted to have a map room within this space.
- Trish Johns was convincing in cautioning us all that that we should use the money wisely whilst we have it to make important improvements e.g. heating and cooling. It is unlikely that we will have some sums again in the near future.
Rosie finished the session after spending two enjoyable hours. She told us that she had taken a pleasure in meeting us all and that she felt inspired by the work that the library volunteers had been taking on. Kim Lambert added her thoughts from the session:
"It was enjoyed by all and we really got a feel for the cost of things."
Fez is making a short film about the day which will soon appear on our Facebook and YouTube channels. We also have an extensive number of images on our Maindee Library Instagram page.

Our architects George and Sarah will be looking over the clipboards and scribbles from last night. By the middle of August we will have started to understand what the priorities are likely to be and where we should spend the money. 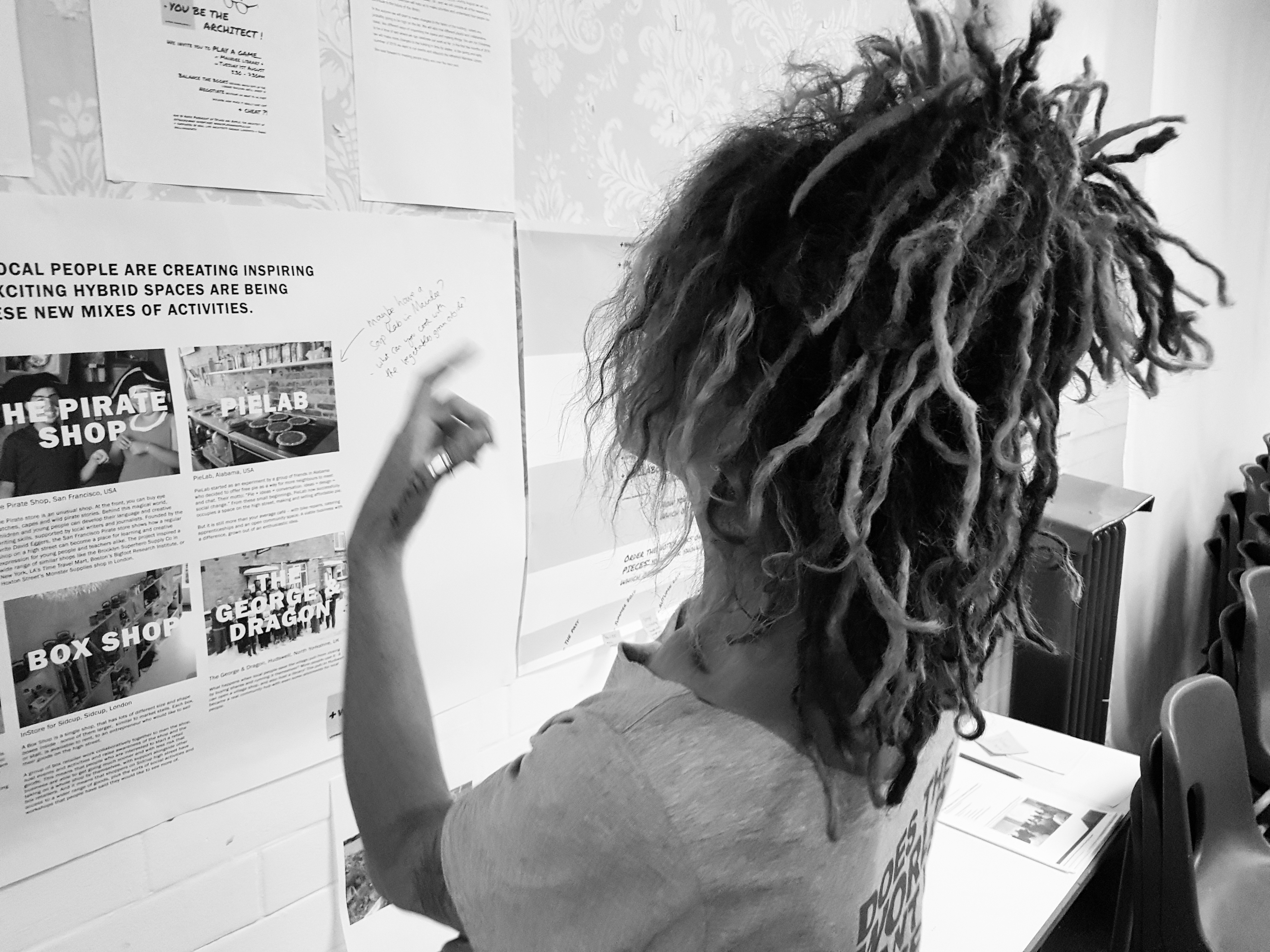 In the meantime it is not too late to have your say: Maggie and Kim are still looking for ideas about how to shape the space. We also have a little exhibition of inspirational ideas from other places on display at the front of the library [see image above].

The session was hosted by Rosie Poebright

The principle contractor - article from the Health & Safety Executive