On Friday 16th December representatives from Maindee Unlimited and some local artists took up an invitation from Ruth Essex to visit Stoke’s Croft and the Bear Pit in Bristol. What we found was a real life story of the journey taken by both the local authority and the community to shape an inner-city area of nearby Bristol. Maindee could take similar steps over the next few years: there are opportunities for art and creativity to make the most of property assets such as the library and the skills of people. 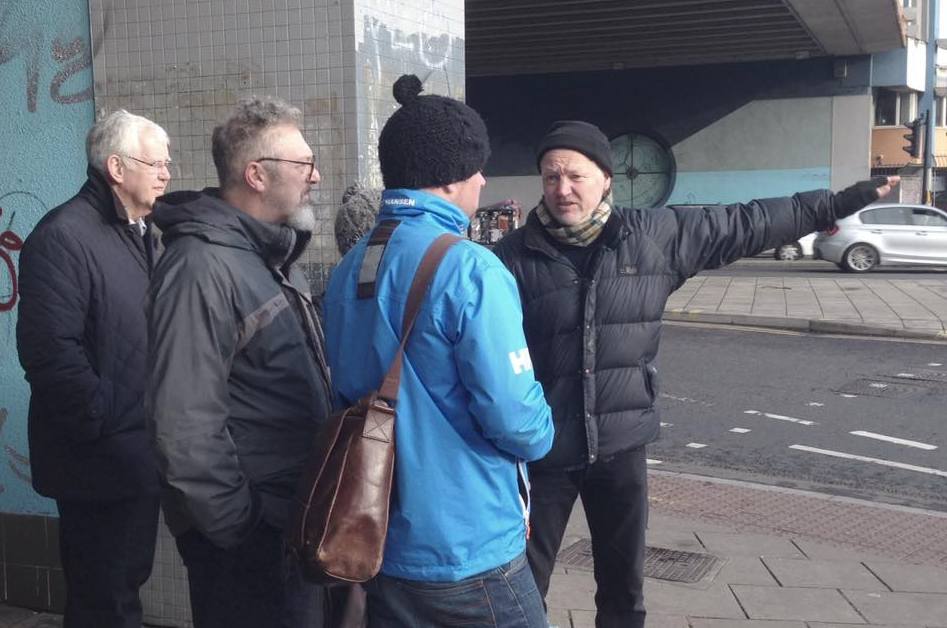 This blog article gives a taste of the visit to Bristol. We hope this gives a pointer to both the potential challenges and the rewards from taking such a brave approach.

Our research trip began by spending some time with Bristol Council and the day developed through a meeting with Chris from the People’s Republic of Stokes Croft [PRSC]. We also heard an unexpected version of the situation from a man who had lived on the streets for over 30 years. The latter experience was sobering as we got to realise that life can be very hard from some in Bristol, whilst many were benefiting from a what seems to be a booming economy. Part of the vision of the PRSC is to eventually help people who have real problems, rather than those who can’t quite choose what type of coffee they want.

The Bear Pit: from the Council’s perspective

From a highway point of view the Bear Pit is a roundabout at which the A38 converges with the end of the motorway into Bristol and the link to the Bristol Royal Infirmary, the bus station and much more. From a different point of view the site has been a public space for hundreds of years - a short history of the site can be found on the Bristol Post’s website. What we see today is a 1960s design which pushed pedestrians into passage ways under the roads and through to their destination via a public space in the middle. Though the area is next to the commercial centre of the city, it has also been very close to the St Paul’s riots of the 1980s and the more recent 2011 incidents in Stokes Croft. Many people have found the area to be unsafe, particularly at night, and so lobbied the Council to make changes. Ten years ago Bristol Council borrowed some money to take action.

We met the Council’s transport strategy manager, who explained how and why the work had been carried out. The Council added pavements at street level so people did not have to pass through the Bear Pit at night, improved the surface, added lighting and also importantly found a way to help make the space better for community activities by establishing a Community Action Zone. Of interest to us in Maindee, the Council worked with the Bear Pit Improvement Group [BIG]  to facilitate a licensed space for community activities. The group have been helped over time to get planning permission for certain developments on the site, such as the double decker bus and two wooden stalls. The Community Action Zone relationship means one point of contact between the Council and the BIG, which helps to get decisions made.

The Bear Pit: from the BIG perspective

Although we will soon feature this story in greater detail with some film and interviews, Chris Chalkley explained the history of the Bear Pit from the community angle. BIG is a group that includes a number of different perspective and backgrounds. For Chris, an important realisation was that the Council had never previously seen the site in a holistic sense - separate departments had managed different bits, such as: street cleansing had looked after the hard surfaces and toilets; parks the grass and trees and the highways department the roads and concrete structure around the site. He described how responsibilities ended according to lines drawn up on a plan rather than the way wind blows a piece of rubbish. In this regard Bristol Council is hardly different to any many others, where resources and people are organised into structures with their own plans. However, a place like the Bear Pit can only be experienced by people as one entity; one place made of differt spaces. A deep exploration of the social contract, similar that explored in Blaenau Gwent, is very evident through the story of the Bear Pit. 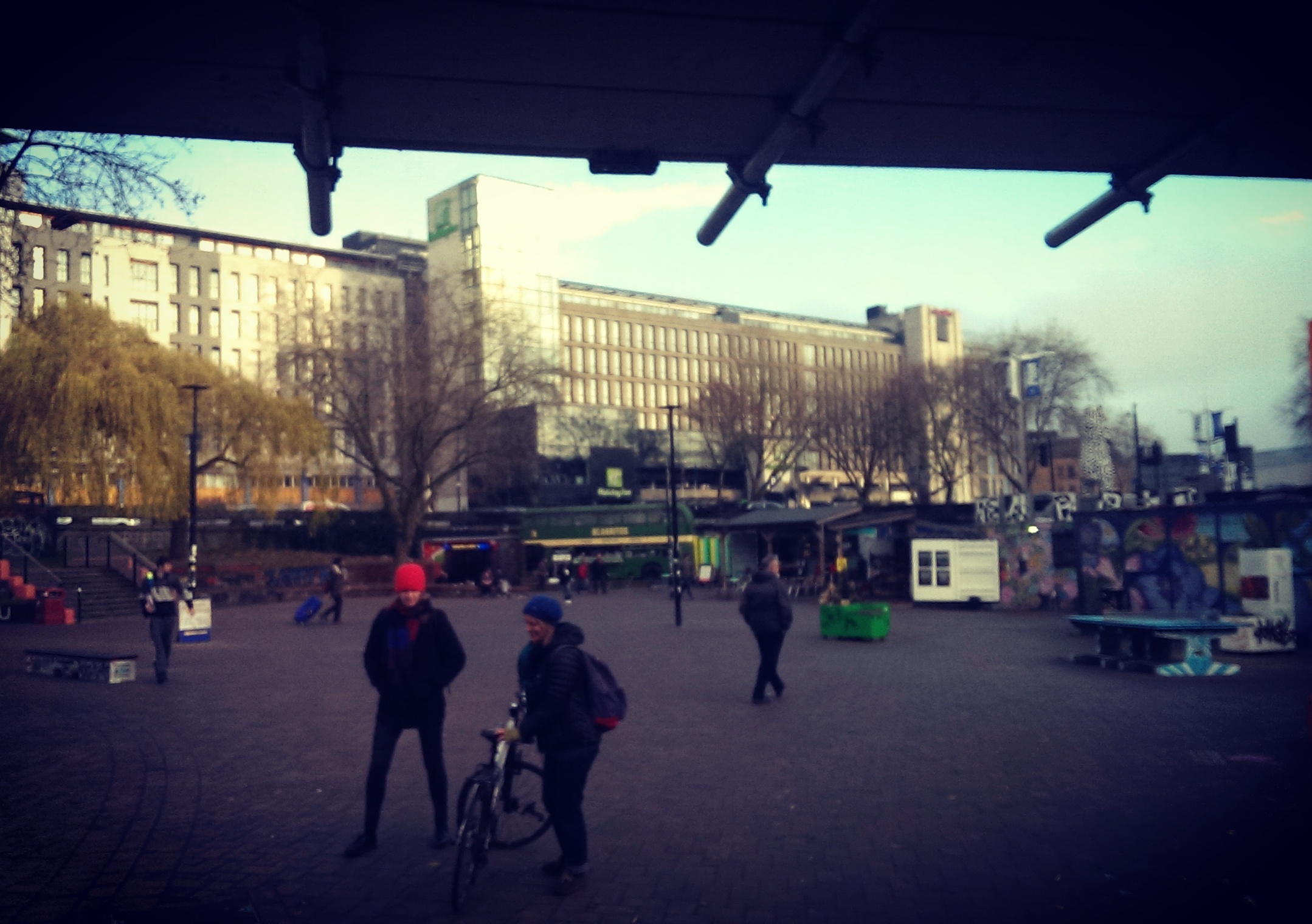 Taking up the social contract, BIG has welcomed an approach which has allowed them to take responsibility for large parts of the site. As time has passed the dynamic of behaviours has changed, with an iconic bear sculpture appearing, a billboard to display a series of artworks, exhibitions in the underpasses and daily trade on the site [a burrito seller; coffee shop and fruit and veg stall]. The site is definitely led by the art and a sense of playfulness; there are spaces for skateboarders, a table tennis table and a ‘minack’ style theatre [image above] is being created in a container. Place-making schemes such as these are often referred to as ‘transformational’, but a reminder that it is not a simple task-and-finish exercise was proved by our conversation being interrupted by a man who had lived on the streets nearby for over three decades.

The homeless man captivated the group as he told us that drinking was the only way he knew how to live – to survive – and that he had seen many of his friends die in the vicinity of this space. When you look around you can see lots of other homeless people living close by. It makes you see that there will always be those who are left behind – or perhaps in need of some support – when a city like Bristol becomes such an expensive place to live with high rents. Artist Marega Palser, who came along for the day, found parallels with the people she met as she invited the neighbours around to paint at Livingstone Place in Maindee in October 2016. As a group we learned from the Bear Pit that approaches such as we are pursuing through ‘Ideas: People: Places’ take time and that the real gains to be made in place-making centre on relationships. Later on we will explore what rising housing costs means for culture, but in the meantime we stay on the economics of art.

The economics of art: the importance of having something to sell

Chris explained that the management of the Bear Pit has become more complicated as it has been reclaimed for the people - particularly in a financial sense. The billboard erected by BIG – and currently showing original artwork from Mexico – could be rented out annually to advertisers for a sum greater than the average British salary [and a bit more on top].  Clearly the space is worth something and has become more marketable. The traders now want to have their own legal relationship with the Council for the land that they use... In the meantime artistic and community activities have to carry on powered by commitment, love and – sometimes – grants from bodies such as the Arts Council. There is some other money behind the ongoing creativity, but it takes a lot of hard work to generate and which be appreciated by taking the short trip to Stokes Croft proper.

We left the Bear Pit and walked northwards up the A38 in to the heart of Stokes Croft. Chris pointed out many buildings and how they illustrated the stories and struggles of the past decades. There is no doubt that the place is outwardly vibrant, but there are also many buildings that are still empty and semi-derelict. In the immediate vicinity there are impressive plans to buy the very-dilapidated Carriage Works and the ongoing efforts at Hamilton House. Chris explained to us how PRSC [with help from some generous investors] had managed to buy property at really very low prices when the economy crashed not so long ago. He argued that having property in community ownership helps to create opportunities for people to use their energy and skills. For example the PRSC’s string of properties along Jamaica Street includes a business making pottery, a shop, very affordable artist studios, storage space and much more. The PRSC make the most of their land. For example the other side of the wall to their storage yard is a brilliant space used by different street artists. It is well worth visiting the People's Republic of Stokes Croft Shop to get a sense of the story and we particularly liked the framed photos of the art wall [see image below]. 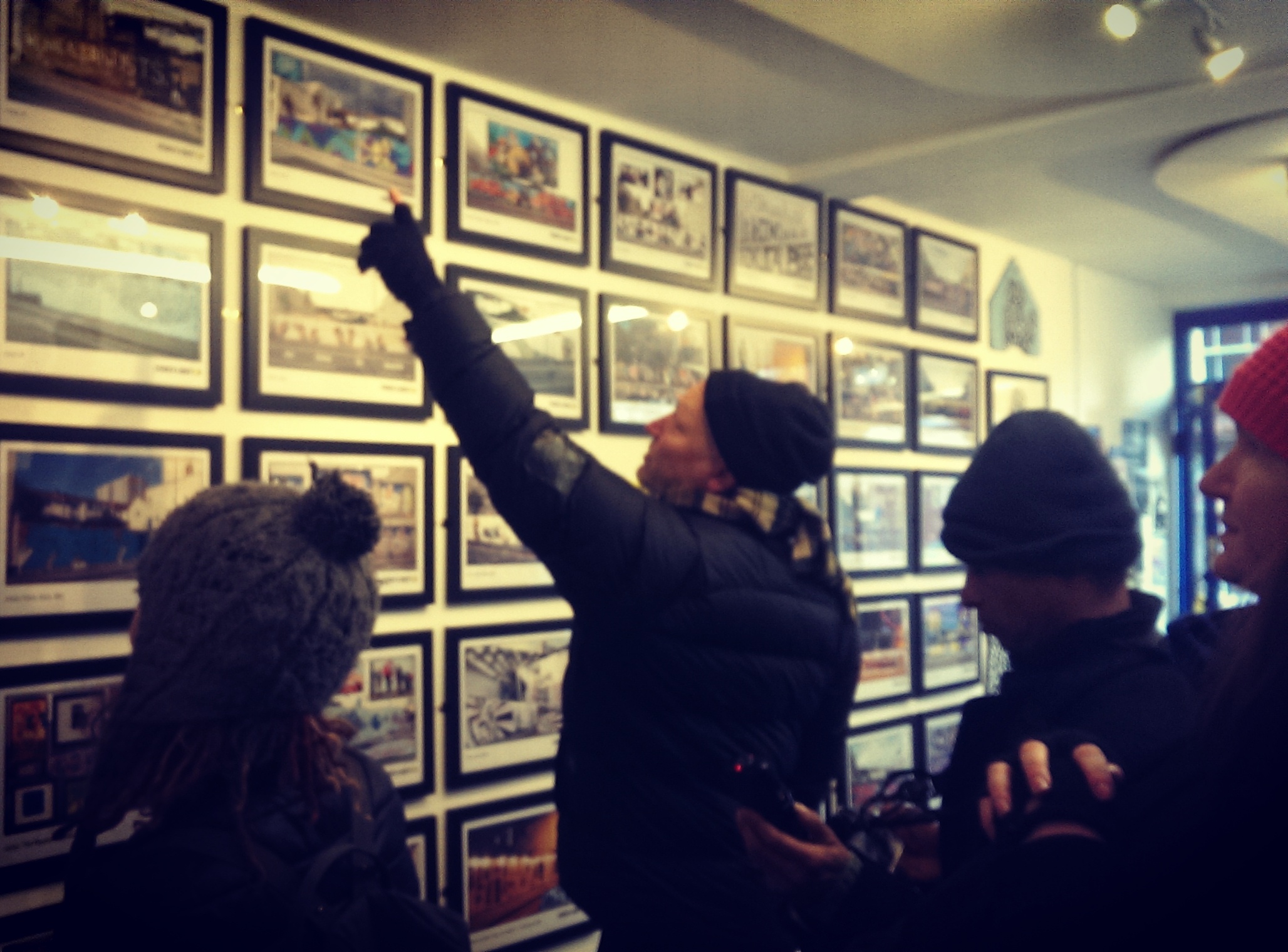 Bristol is increasingly seen as the UK’s second fastest growing city after London in terms of the quantitative economic output [Gross Value Added]. All of this has made property prices rise and rise. In recent times there has been a large debate about what the resulting impact of increasing prices is on neighbourhoods. For example, one of the consequences seems to be that working class areas of cities like Bristol become gentrified, such as Southville and – without doubt – it is starting to hold in Stokes Croft too.

The Guardian has a good review of gentrification with articles appearing by the week. It is not easy to really explain gentrification, but what does seem to happen is that the real character of places vanishes as they become homogenised to resemble the aesthetic of any other city similar in Britain. Increasingly these trends are global and the culture of big cities is merging – Brooklyn comes to Berlin, Berlin comes to Bristol, Bristol comes to Newport… or maybe not. We will see. 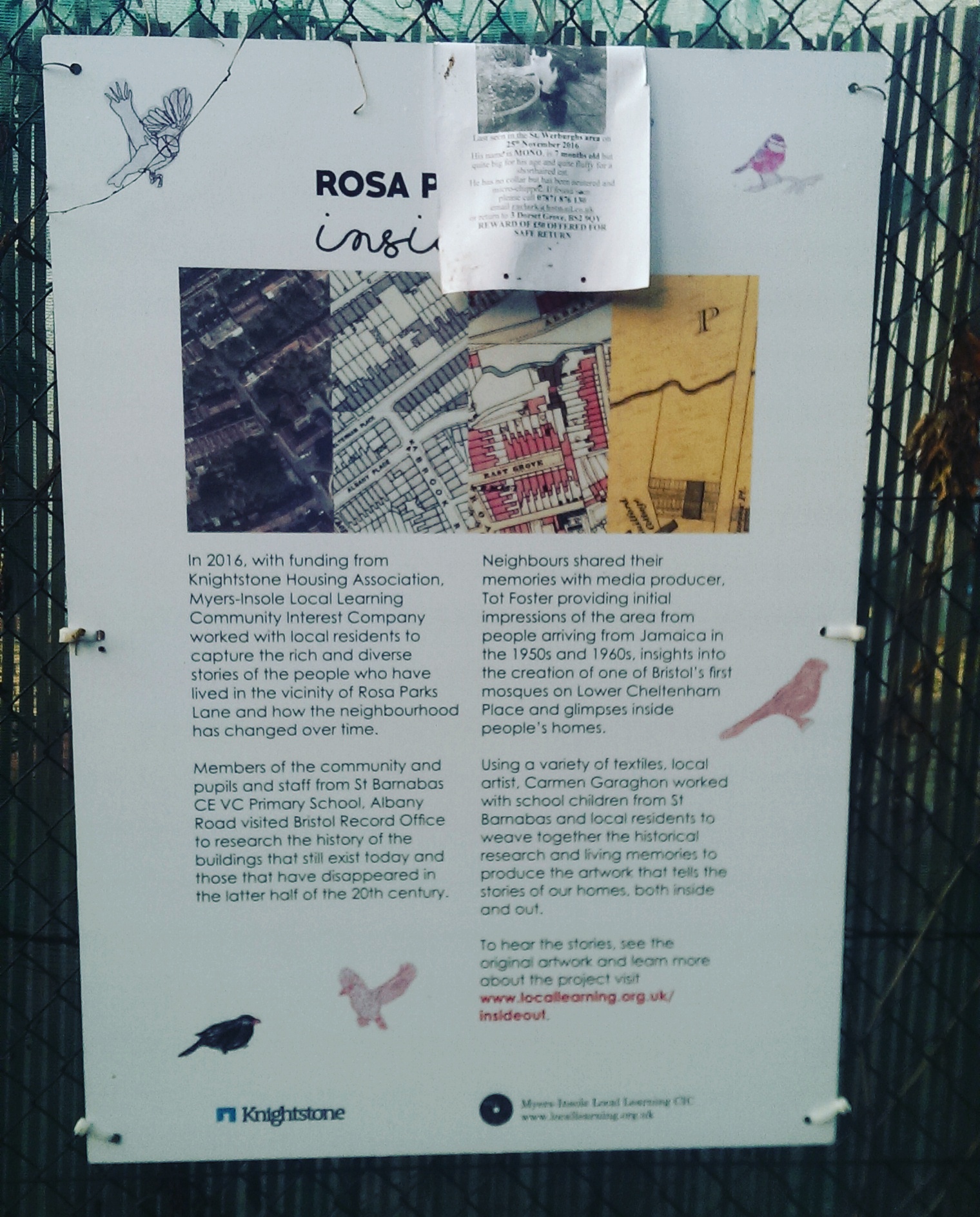 In the afternoon we had a chance to walk around many neighbourhoods within Bristol. It was good to see that people are taking time to consider the history of the people who have lived in the area near to Stokes Croft [see image below]. This project, called Inside Out, explores homes and lives is very reminiscent of the work that Marion Cheung has developed through Maindee Stories - an appracoh which is now expanding through the 1,000 Voices project at Community House. There are lots of images about Inside Out displayed in public for all to see.

One final lesson – don’t forget the power of the visual

As we learned from the work of Clementine Schneidermann and Art Station in Blaenau Gwent, it is important to show people how art projects are developing their  thoughts by making things visual and in the public.

Stokes Croft is full of signs that convey a different set of policies and approaches to urban space. We recommend that anybody take a walking visit and explore what the place has to offer. We were inspired by the bravery taken by people like Chris [as well as the Council] and hope that Maindee can take inspiration to make a long term commitment.

Thanks to Adam from Bristol Council and Chris from PRSC for their time and also to Ruth for organising the trip.

The Stokes Croft Shop selling pottery and much more