Celebrating Maindee Unlimited at the 2017 AGM

Another year in the history of Maindee Unlimited, the charity which supports the library, was celebtrated on the evening of Monday September 2017. This meeting was both a chance to present the year to date, including the finances, and also to hear from some other groups in Newport that are taking on creative community-led projects: the Cwtsh and Le Public Space. 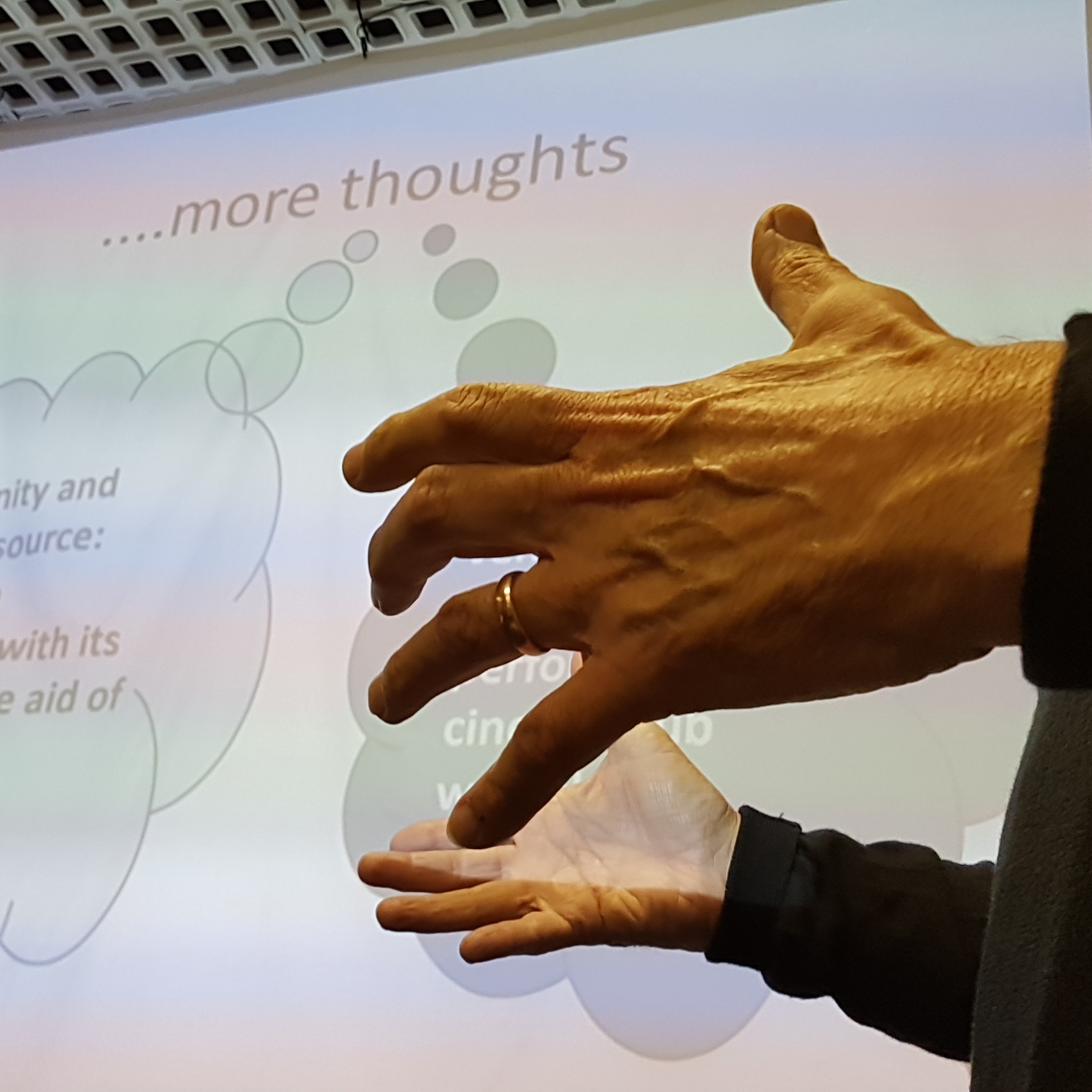 This blog provides some detail about the evening, with links to the other presentations.

Alison Starling is the Treasuer of Maidee Unlimited [MU]. She explained that every charity has financial ups and downs. In the case of MU we had made two big bids recently - one for Big Lottery Fund CAT2 and another to the Big Lottery Fund Create Your Space. Though we had received development grants of £50,000 for the former and £20,000 for the latter, the final proposals were unfortunately not selected from amidst some very strong competition. We are nonetheless grateful for the opportunity provided by the development grants; Alison thanked everyone for their help and involvement on these bids.

ln the case of capital funds for Maindee Library and Triangle project on Livingstone Place, the CAT2 funding would have provided us with a large sum of money. However, we are lucky that we can fall back on existing money from the Arts Council of Wales [ACW]. Furthermore, it was felt that the work would be done “with less dosh but more love”. As reported on this blog, we have Sarah Hollingworth and George Lovesmith on board as architects and are making steady progress.

Alison reported that we are about to have a go at another bid to the Heritage Lottery Fund through the Great Place scheme.

Some specifics for the 2016/17 financial year

Visual presentation of income and expenditure were shown, with an explanation of where the money had been spent.  Alison is mindful that a significant revenue income of nearly £9,000 comes from regular hires of the library space; and that we need to keep looking for income streams for the future. 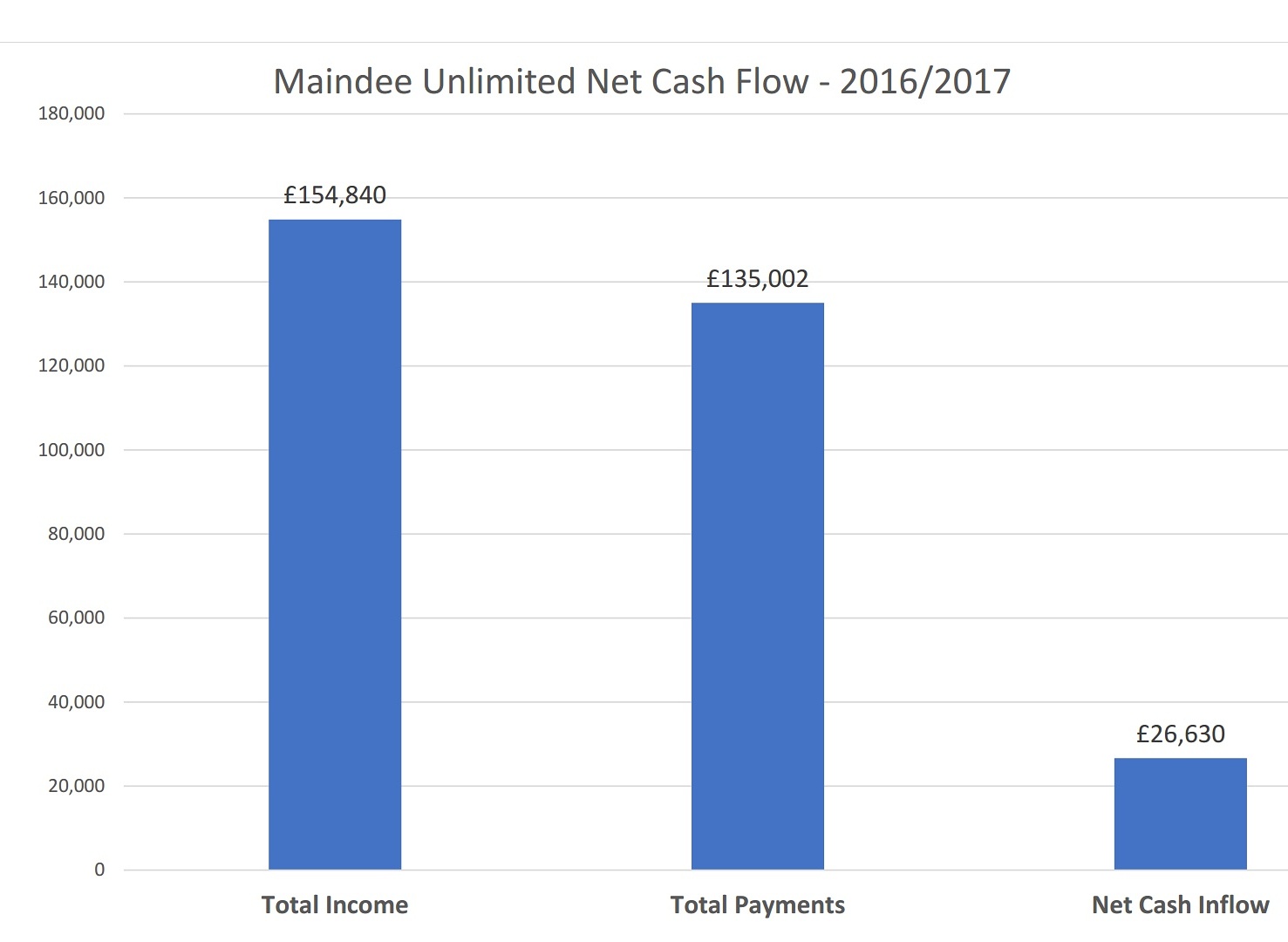 It is worth pointing out that the largest expenditure was on professional fees of £57,000, mainly the development grants from Big Lottery for CAT2 and Create Your Space mentioned before.  Of more interest to Finding Maindee is £15,000 granted to local artists and projects and staffing costs which were 21% of the total spend. The turnover for this year is higher than 2015/16 and the current financial year will be over £250,000. The financial side of the organisation is clearly getting more complicated.

Alison thanked Sheena, Aled, Fez and John for all their work along with the library volunteers and funders such as the Arts Council of Wales, Esmee Fairbairn Foundation, Newport City Council and others. Thanks to Arthur Gait & Company for yet again producing our Annual Report & Financial Statements, on a pro bono basis.

The full accounts can be found here and will be published on the Charity Commission website, alongside records for the previous years.

David Moses has been the chair of MU since the charity's inception a few years ago. David thanked Jan Pritchard, from Arthur Gait & Company, for doing the accounts and acknowledged the tremendous amount of work by John that went into the two recent Big Lottery applications. Although the bids were not granted, the general thrust of our proposal for the Maindee Library building was liked by the Big Lottery Fund and we were invited to reapply for CAT2.

The decision not to re-apply for CAT2 is detailed in our blog article from January 2017. In terms of the present, and project with Maindee Library, David re-iterated that we have agreed a lease with the Council and are going ahead with a refresh rather than refurbish. We are grateful to the guidance and support from ACW and David said that the Ideas: People: Place approach gives everybody more freedom to explore. Having said that, David [pictured below] told us that this is going to be an interesting year and that the deadline to spend the ACW money is July 2018. 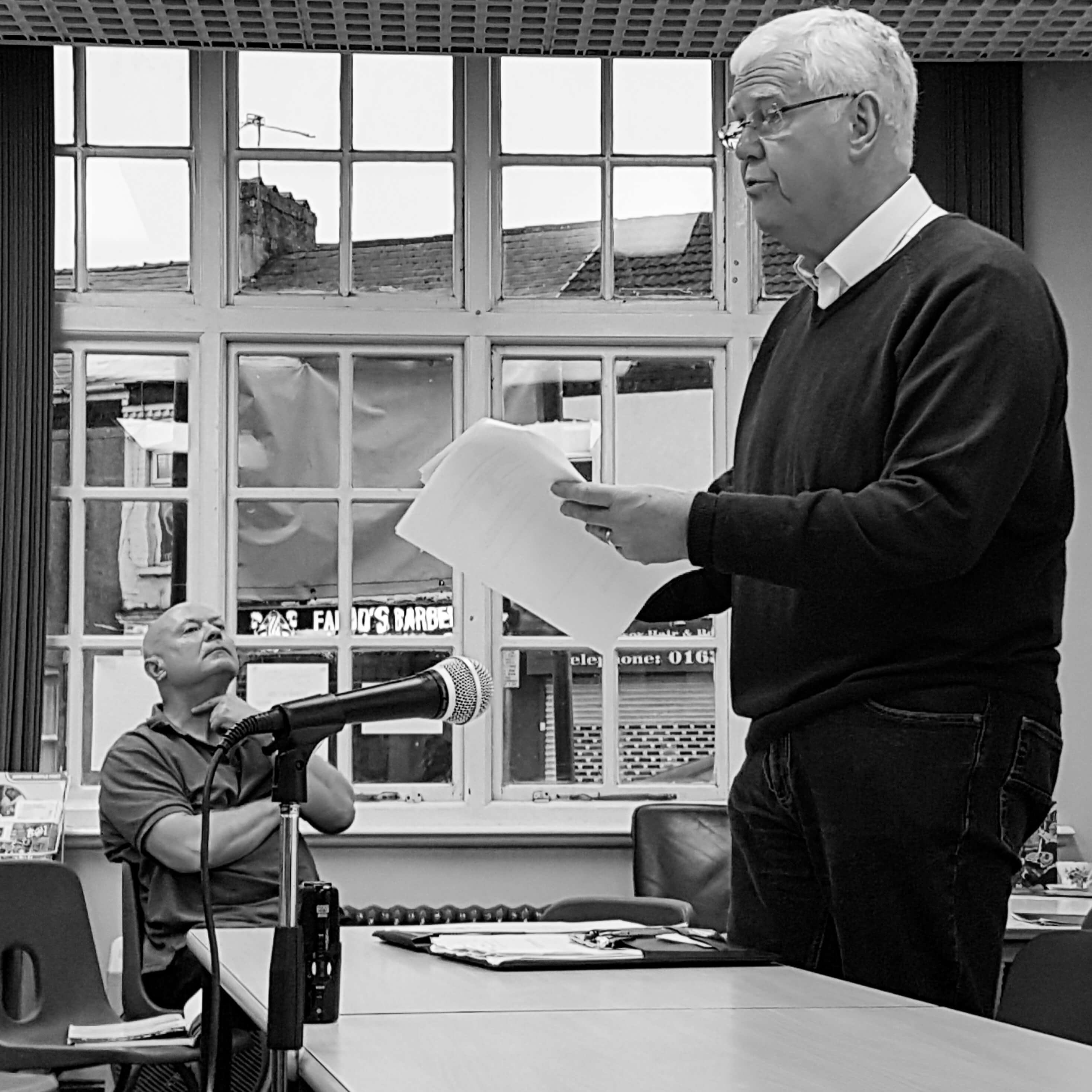 In terms of the day-to-day work, David gave thanks to Aled and Fez for lots of success with New Paths and Street Media projects. David reported a successful year for Maindee Library also; after nearly 2 years of opening it has gone from strength to strength and is making a profit. The library volunteers have provided more than book lending and have provided a community service to many people using the library.  David extended thanks to Amanda Wicks, Maggie Bain and all the volunteers for what he called a "fabulous" job.

David explained that the work with Maindee Village Partnership has not always been easy. However, there is a desire to make Maindee visible and noticed. We have the Christmas Market and a lighting project with artist Jony Easterby coming on Saturday 2nd December. All concerned hope that this will generate business for the local traders.

In tems of other develoments, the Incredible Edible team have developed greatly to take on many patches of land on Chepstow Road. Thanks were given to Alison Starling for the work in setting this up; a film to recognise the work of our head gardener Caroline Williams and her assistant [!!] Maggie Bain is on our Facebook Page. Developing from Incredible Edible we put forward the Green Fingers proposal to the Big Lottery Fund.  Through the work to prepare this latter bid we have developed some interesting new relationships; John Hallam has worked on a bid to Great Place from Heritage Lottery Fund which concentrates on commerce and history in Maindee. For the latter an expression of interest by Maindee Unlimited has been accepted; and we have been invited to submit a full application for December 7th.

David concluded his report by thanking Maindee Unlimited's partners for their expertise and experience:

Trustees: standing down and re-election

The trustees before the AGM were as follows

Three trustees stood down and where not seeking re-election: Julie Price; Jhons Ramirez and  Amanda Wicks. Following the constitution, David Moses stood down, but was proposed by Angela Lloyd to be re-elected. All voted for David to remain as chairman at the meeting. A nomination for new trustee Taslima Begum was accepted and will take office in October. Alison Starling thanked David for being a “perfect” Chair.

The first speaker was David Crowson from The Cwtsh on Stow Hill. David gave a presentation of the 3-year journey of a voluntary organisation to create "a small safe place" at the formerly Council-run Handpost Library. The space at The Cwtsh is quite small but is also flexible; it is now rented out for at least 16 hours a week to different people and organisations. A copy of David's presentation can be found here. 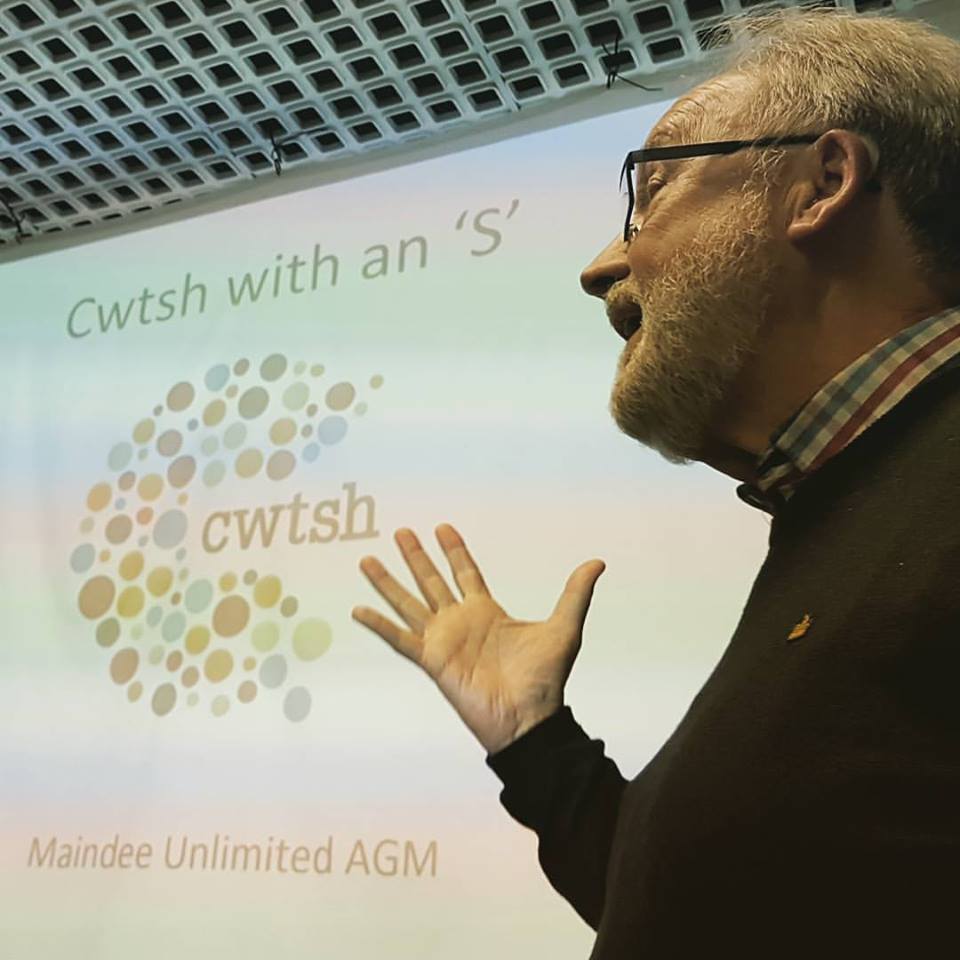 David advised that following on from this Maindee AGM, he would be recommending that the Cwtsh follow Maindee Unlimitefd and go along the lines of seeking a community asset transfer from Newport City Council.

David Moses from Maindee Unlimited asked what income is generated from the Cwtsh bar sales – David Crowson advised that they take approx. £35 - £200 an event.  £2.50 a bottle of beer and £3.00 glass of wine.  Their hire charges are £10 phr – they try to ensure that they have three months capital income in the bank.

Our second presenter was Gary Inight from Le Public Space. Gary went over the timeline and the reasons why the former Le Pub bar had moved from their previous premises on Caxton Place to a new venue on 14 High Street.

The new venue has been launched with a community share offer behind it. Gary described how the community can invest money into Le Public Space as a social enterprise, which aims to provide opportunities and an inclusive space for the wider arts and education. Le Public Space started with a core of 8 trustees, including Gary as its chair, and with support with the Wales Co-operative Centre. 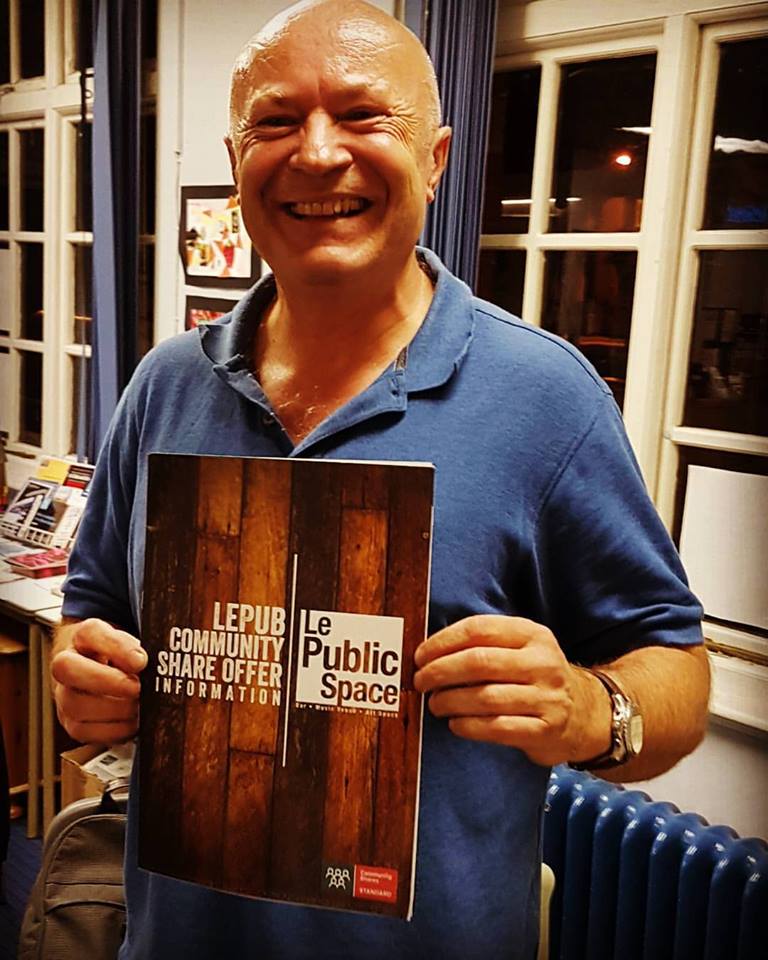 Gary [pictured above] gave a passionate account of what Le Public Space seeks to achieve in the coming years; especially how the space within the former South Wales Argus offices at 14 High Street has a lot of potential. Gary invited all to buy shares as an individual or as a group: £350  minimum to a maximum investment of £5,000. More details are on the website http://www.lepublicspace.co.uk/, including the rates of return from shares and other terms and conditions.

Library volunteer David Hando asked if we can negotiate on the Chepstow Road carpark charges with the local authority, to encourage users and local trade to the businesses in the area.  Also, he asked about the state of the carpark and the issues of fly tipping. David Moses advised this issue to go on to the agenda at the next trustees meeting. John Hallam thanked Incredible Edible for all their hard work trying to improve the latter space.

We look forward to another year of Maindee Unlimited, with the Newport Photomarathon launching from Maindee on Saturday October 28th and a lot of work to happen on the refresh of Maindee Library!

The Cwtsh venue on Stow Hill

Support for social enterprises from the Wales Co-operative Centre